In the fourth book in the ‘Sutra’ series, Devdutt Pattanaik shows the ways to nurture and harbour talent

Physician-turned-author, Devdutt Pattanaik, is known for weaving magic around Indian mythology, making it simpler for the common reader. And when he combines mythology with the concepts of teamwork, creativity and talent, it becomes a useful read. The Talent Sutra: An Indian Approach to Learning is derived from his book on the Indian approach to management, Business Sutra.

Divided into four sections – isolation, reflection, expansion and inclusion – The Talent Sutra explores issues related to creativity in the workplace, nurturing talent and the importance of teamwork. “Training, learning and development are not just about skills and knowledge and competencies, they are about appreciating the human-animal, recognising that neither we nor those around us are programmable machines that we can plug and play. Managing people, hence relationships, is key to the survival of an organisation,” writes the author.

The book is a good deviation from the usual self-help books, which after a point become preachy. This book is a quick read. Each chapter ends with a short anecdote that narrates how the concepts explained can be implemented in real-life situations.

In one of the chapters, Pattanaik explains why it is important for an employer to trust his/her employee’s true potential. He writes that after the events in the Ramayan took place, Hanuman narrated the entire tale to his mother, Anjani. “His mother asked, ‘Why did they go through the trouble of raising an army and building a bridge to defeat Ravan? Why did you not simply flick your tail and sweep the rakshasa-king and his army away?’
“Hanuman replies, ‘Because no one asked me to.’ Like no one saw Hanuman’s real potential the same mistake is committed in our offices, where the true potential of the employee is never realised.” The employer is more focussed on getting the work done and rarely thinks about harnessing the employee’s true capability. “In a world that celebrates alignment and compliance to the vision, systems and processes of an organisation, is the individual increasingly getting invisible?” 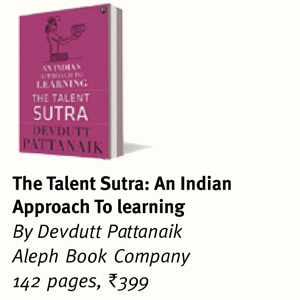 Pattanaik writes that mostly people use their work “as a beacon to get attention”. The Ramayan was written by both Hanuman and Valmiki, he notes. But the “vocabulary, grammar, melody and metre” of Hanuman’s Ramayan were perfect. “Hanuman sees his work as an exercise to discover what he is capable of becoming while Valmiki sees his work as a beacon to gather fame, attention and validation. Hanuman seeks Narayan while Valmiki seeks Narayani. Narayan helps us see others. Narayani gets others to see us.

Most of the concepts in this book are not new or unheard of. Teachings like giving importance to the other’s perspective, being inclusive (even with those who reject our view), seeking growth of not only ourselves but also of others, and nurturing and promoting talent are known to many. What makes The Talent Sutra different is the way in which the author presents these ideas. Using mythology to explain them adds a fresh perspective.

For instance, the age-old skill of diplomacy is described by giving a reference from the Mahabharat. Pattanaik writes that when King Virata of Matsya learns that his son, Uttar, single-handedly defeated the Kaurav army, his heart was filled with pride and he announced celebrations across the kingdom. But Yudhishtir, under the guise of a priest, said that the young boy was helped by his charioteer, Brihanalla, the eunuch, who once served Arjun, the great archer. The priest was speaking the truth, but the king was not ready to hear that. The author suggests that had Yudhishtir dealt with “sabha-chaturya” or “tactfulness in court” the king would have heard him. “It [diplomacy] is a trait that people who work with leaders must possess. It is a trait that even leaders need to posses if they wish to lead.”

The book concludes on a cautionary note: one should not be blinded by the ways of modern management, which is all about chasing a target. “Hindu mythology, however, warns against chasing Lakshmi, the goddess of wealth; it will result in conflict. Instead it advises making oneself attractive to Lakshmi, worthy of her affection and auspiciousness, so she walks our way. For that we have to be less like Indra, king of the gods, who is consumed by his own hunger, and more like Vishnu, preserver of the world, who is consumed by other people’s hunger. Vishnu knows that human hunger is threefold: for wealth, power and knowledge.”