IBC has been drafted with big dreams but unfortunately because of flaws the desired (expected) results have not come and the NPA position has not been improved. In India’s banking system, non-performing asset (NPA) has been a very serious issue. Some or the other bank is regularly going out of or coming in to the RBI moratorium; the very recent example is Laxmi Vilas Bank and earlier examples are PMC Bank and Yes Bank.

Such incidences shake up the confidence of depositors, customers and other stakeholders of the particular bank as well as the banking sector as a whole. We need to analyse and examine the reasons of bank failures and see how they can be curbed to have the nation’s confidence restored in the system.

Some important reasons behind the NPA

A. Genuine Failure (Default) of Business because NPA because of
1. Finance to unviable project
2. Natural calamities
3. Change in government policies
4. International competition
5. Unusual time taken by banks (time and cost overrun that makes project unviable)
The NPA because of the aforesaid reasons has to be addressed by the promoter (the borrower) finance by way of immediate disposal of security and write-off the debt. It will save time, energy and resources of the financers, i.e., banks.

B. Wilful Defaults:
1. Diversion of funds: Funds issued for the other purpose is taken for working capital and short-term loans used for long-term assets
2. Cost overrun: Because of lethargy and wilful delay in implementation schedule, time and cost overrun makes project unviable
3. Inflated project cost: Here financers are not doing proper homework and allow the inflated value and finance which results in bad loan
4. Flaws in the appraisal system make it easy for unscrupulous borrowers to siphon out borrowed money
5. Ways to siphon the funds:
(a) Transfer overseas
(b) Excessive pricing of imported components
(c) Bogus – book debts
(d) Overvaluation of stocks, WIPs, etc
(e) Withdrawals for services not provided for
(f) Export bills not realized and write off taken from appropriate authorities
(g) High value investment overseas
(h) Money kept outside brought in by way of FDI/GDR etc & Notes invested here and capital and benefits repatriated
(i) Borrowed money advanced to group companies, subsidiaries, relatives, benamis; recovery of which is impossible
(j) Borrowing with formula of “nava-juna”

C, D & E: Frauds, Vested Interest, Hand in Gloves
Every now and then new frauds are coming out and checks and balances by financers proved to be inadequate to address such flaws, how can these be reduced and long few benefit can be achieved? This is a big issue which requires very fruitful experience to curb it.

All the above cannot take place without a ‘gathbandan’ of the bank, the borrower and other parties. The regulatory authorities need to device a foolproof mechanism to address this.

The government of India has taken an initiative and brought in the Insolvency and Bankruptcy Code (IBC) 2016. Some good results were expected from this Act but I am sorry to say that the purpose of the Act has been defeated because of lot many flaws in implementation.

1. Appointment of IRP/RB by the financial creditors:

The Insolvency and Bankruptcy Board of India (IBBI) has been formed for regulation under this Act, which says a stressed corporate debtor (CD) shall come out of the situations by way of a resolution, and a resolution professional shall be unbiased. Here the appointment of IRP/RP is by financial creditors.

They follow this procedure:
1. Empanelment of IRP
2. L1/L2 formula for allotment
3. Preference given to so-called own RP

The financial creditor (FC) appoints its own RP who acts as recovery officer and not as resolution professional. Since he/she has been appointed by the FC, his approach remains biased.

This flow can be removed as under (a suggestion):

Since the banks are regulated by the RBI and Banking Regulation Act, a list of all NPA accounts has to be called for by RBI/GoI and then cases should go to the National Company Law Tribunal (NCLT) for CIRP/liquidation an IRP/RP shall be appointed by NCLT in consultation with IBBI or GoI. The remuneration of IRP/RP shall be fixed by GoI/IBBI/NCLT.

The work of IRP/RP shall be redefined 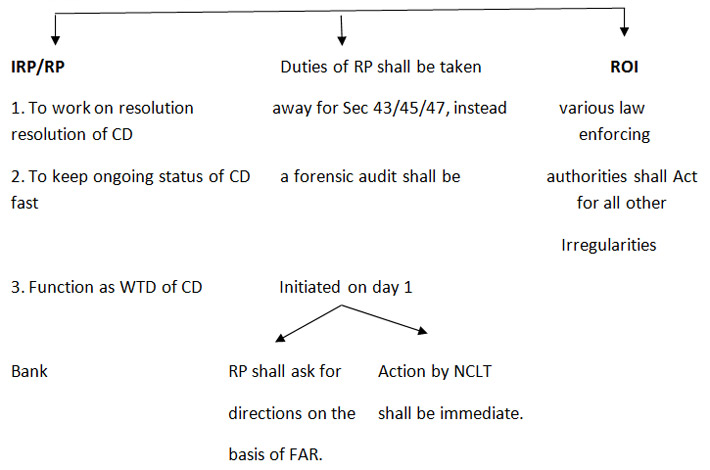 An account becomes NPA over a period and with the art of group of people expecting IP to find out solution to all these things in 330 days’ time line is daydreaming. Even to follow the timeline by NCLT is not possible.

In case of OC, things are even worse, the remuneration (fees) of the IRP/RP is not fixed, the IP has to spend from his/her pocket and in first Committee of Creditors (COC) the financial creditor (FC) removes the IRP in some case even after three-four months and they don’t pay here the IRP/RP’s goodwill at stake valuers/ forensic audits/ security and other agencies work.

A toothless person comes to COC from banks, they don’t decide, it is voted after the meeting to hide the misdeeds of lenders.

When a Resolution professional is appointed by the NCLT he/she shall not be removed without a valid reason.

The IP is to be given full strength and power to complete the process.

Conclusion: The power to appoint IRP/RP shall not be with the financial creditors (FCs) but shall be with an independent unbiased authority, i.e., NCLT, IBBI or any department as GoI thinks fit.

One utmost suggestion is that the existing promoters can file a resolution plan without haircut, only relaxation in time shall be given, because he is a dreamer and implementer. Others will not invest their valuable resources at the quotes of FCs.

Actual funds be recovered and not by way of book entries by banks; else the problems of NPAs will rise in geometrical progression.

CD shall be allowed to give resolution with restrictions and such conditions/restriction shall be defined.

This will not kill the production capacity of the country. And survival of people working with CDs will not be at stake, unemployment will not increase.

They are to regulate IPs and give guidance and support to IPs on ongoing basis IBBI & IIPA’s shall strengthen the hands of Resolution professionals.

This Act has been drafted with big dreams, but for the dreams to come true in implementation, something else is required.

This will result into:
1. Big bankruptcies of corporate debtors (CD) and financial creditors (FC).
2. Pressure on the exchequer
3. Big unemployment
4. Loss of trust in banks
5. Lose of entrepreneurship

Without realising ground realities and cooperation in implementation, the beautifully written Code will not be as fruitful as expected.