Ahead of PM’s visit on September 18, Varanasi stages a unique protest against potholed and damaged roads 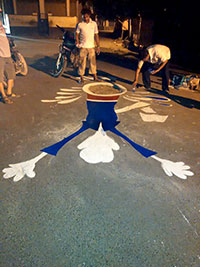 How will you react if you see a white coloured danger skull painted just above a pothole in middle of a road? A sigh of relief or angst against the authorities or both. Such is the way people of Varanasi, PM Narendra Modi’s constituency, are protesting against the potholed and damaged roads.

Frustrated by the failure of the municipal corporation to repair giant potholes and broken manholes in the middle of the busiest roads in town, a city-based artist Umesh Jogai and his team are painting such potholes across the city. “We paint at night when there is no traffic. We worked for four consecutive days and have already covered around 12 potholes and open manholes,” says Jogai. 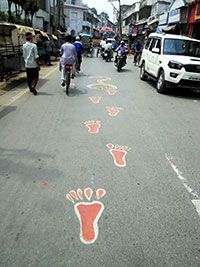 Two boatmen turned painters, Sandeep Sahni and Shankar Sahni, are assisting the 37-year-old artist in his noble cause. Together they have painted basketball nets, cobwebs, torches, etc. to drag attention towards giant potholes. These artists also paint the word ‘awaaz’ or voice along the pothole. “By doing so we are raising our voice (awaaz) against the bad roads and poor civic amenities in the city,” adds Jogai.

Painted potholes and damaged manholes will not only alert the citizens but will also help in curbing road accidents and mishaps. Moreover, these painted roads will serve as a sharp reminder to the authorities to complete their unfinished task. 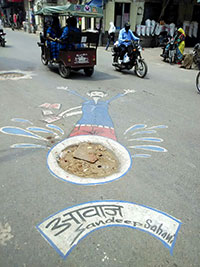 “Our next move is to cover the damaged stretches on roads,” says Jogai.

“Although no government official or politician took cognizance of our work, we have been getting support from local people. When we set out to paint, people living nearby and those who commute on the road join and support our cause,” adds Jogai.

Varanasi is infamous for its poor roads having numerous potholes and broken manholes on a 1,170 km road network across the city. Damaged roads and this unique protest might give a bumpy ride to PM Modi who is scheduled to visit the city on September 18 and is expected to travel some distance via road. Meanwhile, the district administration is racing against time to repair the roads ahead of his visit.