In 1991, the Reserve Bank of India had to open its vaults and allow 67 tonnes of gold to be airlifted out of India, which was pledged with different banks abroad to raise a loan of $600 million. The money was meant to save the country from defaulting on repayment of the IMF loan. Also, at that time, Delhi had foreign currency reserves to cover just three weeks of imports.

The gold airlifting episode of the Chandrashekhar era remains etched as a bad memory in the minds of many Indians. However, not many would know as to how efficiently the then prime minister had handled a delicate financial situation even as he headed a minority government and later as a caretaker PM, for a little over a year.

Interestingly, Chandrashekhar would come across as a leader who spoke crisply, be it while addressing the nation or interacting with media. He was the first PM to enter a Doordarshan studio without a script for his first address to the nation as PM. Not only he spoke extempore but also completed his address in exactly 20 minutes without a fumble or retake. 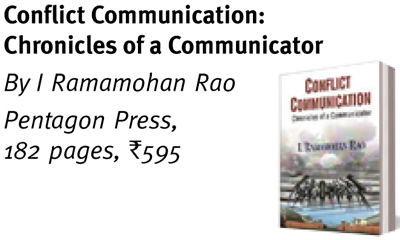 As against this, his successor, PV Narasimha Rao, a polyglot, writer and thinker, never spoke his mind. His silence was to be interpreted. Yet, it was under him that major economic reforms were initiated, without any opposition. Also, it was during his term that MPLADS was initiated as compensation to the lawmakers’ for their curtailed role in  helping people after the end of the license and subsidy era.

These are some of the vignettes from the past that are brought alive in ‘Conflict Communication: Chronicles of a Communicator’ by former principal information officer I Ramamohan Rao. The book takes readers through five decades of government’s ways of communicating with the nation and the rest of the world. It gives them an impressionist’s view of the personalities of India’s five prime ministers – from Jawaharlal Nehru to Atal Bihari Vajpayee – through the eyes of the author.

Rao’s book deals with facts and refrains from giving the author’s opinion on either events or personalities. Simple style with near avoidance of subjective adjectives makes the book highly readable, authentic and informative.

Rao’s account makes it clear that governments at all levels need to take communication seriously in order to avoid media trials or major trust gaps with the common people. Proper and timely communication also facilitates policy implementation. When Manmohan Singh as finance minister had to take some harsh measures to rejuvenate the collapsing Indian economy in 1991, he had no idea that the ground for it had already been cleared by the senior bureaucrats and policymakers. He took measures that, in short term, were very harsh on people, but didn’t invite criticism from press or a public backlash. It seems bureaucrats had briefed media over many months on the national financial emergency hence it did not create panic or unrest.

However, later the same Manmohan Singh as prime minister  had failed in winning people’s trust; and the Congress lost elections on the issue of adverse impact of reforms on prices. How did the Congress government lose its rapport with the media and people?

The book deals with the author’s experience of conflict situations in the Middle East, 1965 and 1971 Indo-Pak wars, the IPKF operations in Sri Lanka, Punjab and Kashmir terrorism. A firm and clear communication policy had helped the Indian army in defeating Pakistan and liberating Bangladesh in 1971, while a lack of it had created a mess in Kashmir in the initial years of Pakistan-backed militancy.

Also, while the Indian army seemed ill-equipped in front of the Pakistan army’s American arsenal in 1965, and had won the war only because of it’s brave soldiers, the defence forces were soon to realise the importance of telling the country men about their need of modern arms and ammunition.

The book could provide many a good lesson for the Modi government which has very little interaction with the media and tries to believe in its own hyperbole.