Climate change and women: What India needs to do India is likely to be the most impacted country by the effects of climate change and the most impacted large country.The IPCC’s Sixth Assessment Report on Climate Change (2021) outlines speed of environmental damage and global warming is far starker than visualized earlier, thus calling for immediate and transformative actions that have wide ramifications for the female population in India, which is particularly susceptible to impact of client change.

Climate change is threatening to widen gender-based disparities, potentially adversely impact the role of women society and potentially affecting the socio-economic developmental opportunities available to women, thus calling for immediate solutions. Globally there is considerable and structured endeavour to aggressive enhance engagement of women in the decision making, especially at the grassroot level so that their problems can be better understood and responded to by policymakers.

Considerable progress has been made under the aegis United Nations Framework Convention on Climate Change (UNFCCC) to help member countries to recognise the disproportionate risks women face owing to climate change and respond in a structured and with adequate policy response, supported with effective mechanism to ensure implementation and progress.

Indian Dynamics, Gender, and the Climate Context
India ranks 131 on the Gender Inequality Index, which is based on health, education, and related parameters, which reflects highlights how women and children keep getting disproportionate poor treatment. Given these circumstances, any further negative impact and scenario could make things only works and continue to deprive Indiafurthermore of a more equitable socio-economic environment.

Sorensen in his paper “Climate Change and Women's Health: Impacts and Opportunities in India” details how Climate Change risk will have a significant greater adverse implications impact on women, especially from healthcare perspective. In such context, it is critical that the economic growth that takes place is not only to reduce existing inequalities, but also prepare for likely socio-economic challenges, like the imminent challenge of global warming due to climate change that are likely to widen existing gender inequalities. Economic growth must be sustainable, which can only happen when it is inclusive even as it strives to curb GHG emissions.

Even though only a fraction of women in India are part of work force-lower, compared to the likes of China and SE Asian countries, women have an important role both in the formal and informal sectors. In the formal and semi-formal sector of economy in India, the progression India’s employment framework with the four Labour and Wage codes (once implemented) should be an enabler a more flexible work framework, should the women so require, to manage that may be aggravated by the impact of climate change. The experience of developed countries highlights need for continued policy and communication to enable and support women in workplace, the covid-led shift in workplace model may have expedited transition and acceptance of alternate working models.

In the informal sector, as more women take to work there will be need for policy support, government incentives and initiatives to support as women who increasingly take to work. In the absence of gender-based employment and other data in India, it presents an to make meaningful policy progressions that most of the multi-lateral agreement exempt and call for, which points to a major gap in policy making process.

Global Dynamics and Evolution of UN Frameworks and Tools
There have been considerable efforts over the last five years under to build considerable coherence across the various international policy frameworks, which has helped in greater alignment of policy objectives, and led to improved coordination in the implementation of common goals and targets. Central to this is the focus on reduction of gender inequality by continued focus using structured approach to empower women and achieve inclusive development.

Significant and most critical progress has been under aegis of UNFCCC and the United Nations International Strategy for Disaster Reduction (UNISDR), with UNFCCC recognising the disproportionate impact on women from climate change and initiating gendered perspective in all climate change related planning and action across all its key elements mitigation, adaptation, capacity, technology, and finance.

At macro level, in 2019, The Conference of Parties (CoP) 25 in 2019 (initiated in 2014) adopted the Enhanced Lima work programme and the Gender Action Plan (GAP) The GAP sets out objectives and activities under five priority areas. At a Macro Level the UNFCCC has outlined a Gender Action Plan (2019). 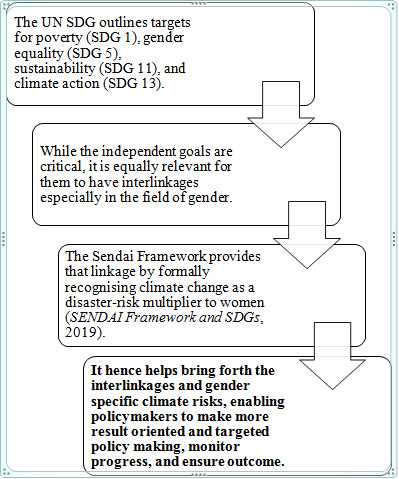 These frameworks focus on the need for development to be risk-informed if is to be sustainable, and in the process draws linkages between the UN SDGs, showcasing how outcomes as defined under UN SDGs are a product of interconnected social and economic processes, andconnects it formally with climate related gender risks.

India: Policy recommendations for gender mainstreaming
The Ministry of Women and Child Development is the nodal ministry of the Government of India,to address gender related policy issues and at a more fundamental level, the Article 14 of the Constitution of India guarantees Gender Equality as a Fundamental Right.

In recognition of gender specific climate challenges, in 2016 the Ministry put out a discussion draft of the National Policy for Empowerment of Women, 2016 identified “Environment and Climate Change” as one of the priority areas, this incorporating some inputs from the UNFCCC’s LWPG Programme, where India is a signatory and key partner.

Many of the ongoing Government programs have bearing on the livelihood of women and according to the NABARD report. “Climate Change, Impact and Adaptation: Gender Perspective in Indian Context, 2021” there is need for highlights how there is a need for comprehensive overhaul of the existing policies to make them more gender-sensitive and gender friendly, in the deteriorating climate context.

At the Ministry level, there is need to define the National Policy for Women that has been in the making for years needs to fructify. This is not just a need but also requirement as a part of the roles and responsibilities of the Ministry. The UN SDG, The Lima Gender Action Plan and the learnings from experience of covid are some of the key aspects that need to be incorporate therein from the Women and Child Welfare perspective. Also, the Lima GAP and other frameworks are now in place and the policy framework should be designed to seamlessly integrate with the same to ensure the progress with respect to initiatives undertaken to minimize climate impact on women is effectively measured and tracked. The focus should be on implementation and governance of programme by way of internationally accepted frameworks and tools provided under aegis of United Nations.

The is a critical need for the Government and the Ministry to instate a structured policy, given the clear urgency to address the complex challenges. Any meaningful response would require involvement of government machinery at all levels, locations, and ministries in the country to act together which is a herculean task.There is thus a need to mechanism aligned to international framework and tools proposed by the UN.

Overcoming the challenge will require necessary backing for the Country’s leadership and Niti Aayog, and of courseconsiderable and investment in actions aligned to policy priorities. Also, while using international models, India should call in its experienceto address socio-economic-health challenges and focus capacity building and scaling up to address challenges at local, state, and national levels. Also, considering India’s challenges are unique, diverse, and aplenty, there need for involvement of women in decision making, especially at local level, so that women’s problems are better understood and accounted.

Gossain is a strategic communication professional and a strategy and sustainability researcher, working at intersection of Public Policy, Law, and Strategy.