Higher services are for those who genuinely feel for people, writes TSR Subramanian

In one of his last articles, the late bureaucrat’s memorable advice to civil service aspirants My greetings and good wishes to the aspirants for the UPSC civil services examination. Every year a large number of young women and men apply for the thousand-plus civil service slots, after serious preparation, in many cases for years. In the pre-independence days, government service was the most coveted occupation; naturally entry into the ICS was a crowning achievement. However, the state civil services, even the services at district or divisional departments, were attractive enough for young people to aspire for. Since then, over the past nearly seven decades, the higher education enrolment has multiplied by 300 times; the job opportunities have expanded explosively. New technical education opportunities have sharply increased, to attract aspirants to the various professions. The needs in the IT sector, engineering and medical fields, as well as the service sector have seen remarkable growth, attracting the good young minds of the country.

Despite these, the glamour of the civil services has not diminished. Even today, the best in the country compete for the few openings at the All India Services (AIS) level. Whereas, the pre-independence aspirants, as well as those who joined in the first decades thereafter looked on the senior civil services as a ruling class, there is a marked shift in the ground situation in the recent decades. It is natural that in a democracy, the elected representatives would play a dominant role in both governance and administration. It took two or three decades for the politician to understand his own ‘eminent’ position in the governance hierarchy; the politician of today treats himself not so much as a public servant – he behaves, as a master of the citizen; the power-of-attorney holder has assumed more powers than the citizen who gave him his powers!

There is perhaps a larger aspect to this change over the decades. The collector or the commissioner was the king of all that he surveyed; he was then the lord or master of the territory which he was asked to manage; which he managed with total authority. This is not to say that he was heartless in dealing with the people – indeed many of them showed great compassion, thoughtfulness, foresight, ability and innovation. In those days the final governance was in Whitehall, 6,000 miles away.

In the post-independence era, all that has changed – gradually, imperceptibly, but most certainly dramatically and totally. Today the civil servant is genuinely expected to be a servant of the people – he is supposed to respond, both in policy making and implementation, to the aspirations of the people, meeting their immediate and long-term needs. Those who see the civil service today as an avenue to get authority and dominance should not aspire to the services; the higher services are now for those who genuinely feel for the people, have the urge to serve the citizen, and compassionately execute his functions in the ‘public interest’, in its widest and most positive definition. The first point therefore is that the services are not for those who seek power; they are meant for those who have an urge to contribute to public need. For those of the latter kind, there will be no shortage of opportunities that will be on offer.

Many of you may get through the examinations; alas, it is inevitable that there will be a larger number who would not make it. It needs to be mentioned straight away that while the best in the country get selected, many of those who don’t make the cut are not much inferior in any way. I have seen in Uttar Pradesh where I served for many decades, as well as in the Delhi Secretariat, that a very large number of state civil service officers in the states, and the Central Secretariat Services officers were of excellent mental calibre – indeed many of them were as good if not better than the successful candidates to the All India Services. The short point is that luck has to play an important part in the final success in the competitive examination, given the very large number of aspirants and limited number of openings. 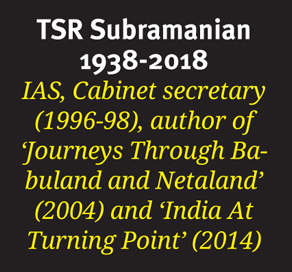 A word for those who are going to appear in the examinations, and thereafter in the interview. While ‘book knowledge’ will be tested, the examiners and the interview board, who are generally well experienced, would try to test comprehension, quick thinking, decision-making ability – definitely attitude – not just mastery over an individual subject. This is as should be, because the young officer in the district, and later the policymaker in the secretariat will be every day confronted with the unknown and the unfamiliar – he has to search and find the best route forward, sometimes working in the dark. A general appreciation of public affairs and deep overall comprehension are essential for success.

One word of advice for those who go up to the interview stage: do not try to bluff the committee – they are very experienced people; if you do not know the answer, say so openly; you are of course allowed to say that you are not sure, that you will make a guess – the guess need not be accurate, but it should in the right direction. I mentioned luck as a necessary ingredient for success in the civil services; this also includes the right circumstances including the right questions, the right opportunities – in addition to the interview board being in the right mood! I should also add that the Union Public Service Commission (UPSC) is one of the great institutions of the country, which has retained its pristine purity, and utmost integrity in the selection process.

For the successful aspirants, you will have great opportunity to serve India; at the end of your career, you will have the satisfaction of contributing to the Indian citizen. You will see many facets of the country, travel widely, meet different interest groups, have the opportunity to mediate between opposing points of view. The variety of experience is unbelievable during service period, which is bound to have its highs and lows. You would have experience over widely different sectors of activity – economic, social, rural, service – and at some stage will comprehend the interconnection and linkages between seemingly totally different activity streams. This is the strength of the AIS officer – he is not master of nothing, as those who wish to denigrate government services would claim; he is definitely a genuine expert in administration, which very few in India can claim to be.

I have known of many aspirants who want to join the service to amass wealth, frequently through unfair means. The services are not meant for this – the services are meant for those who aspire to rich experience, and are public spirited enough to contribute; the services are not meant for those who only want to take, and not give. This is not an idle inspirational, idealistic comment – I say this with 50 years of experience. The officer who looks for shortcut in making money while in service runs a huge risk of getting caught – I can think of any number of officers whose lives were ruined in this fashion. More importantly, he is recognised for what he is by his fellows in the cadre – such social ostracism is a terrible feeling. It is not a sensible, practical approach to aspire to become wealthy through government service. If you are interested in money and have the talent, you should become an entrepreneur, or get technically qualified for a corporate job or run a business – and in lighter vein, join politics!

I wish all of you the best of luck. Those who do not make it, do not be disappointed – there are a variety of good things that you can do in your life to make it a success.

This article was written in July 2017 for a proposed website for civil service aspirants.