It all started when Balvinder Kumar, a senior civil servant, was suspended twice while serving in Uttar Pradesh almost a decade ago. In the midst of worrisome and sleepless nights, he decided to explore spiritual readings and practices like Transcendental Meditation. The deeper he went into studying philosophy, science and spirituality, his fascination about the mind and its thoughts 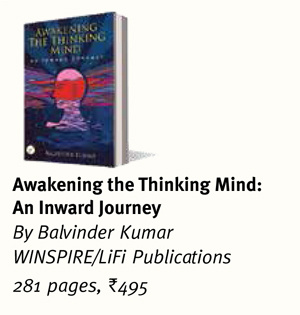 increased. He realised that the root cause of all our problems lay in our minds. And thus came his first book, Man’s Spiritual Journey, in 2014 that explored the very purpose of our existence.

Kumar, who is currently the secretary at the ministry of mines, has written a continuation book: Awakening the Thinking Mind, which traces the processes and mechanisms of the human mind. The book tries to show the reader the power of the mind; that “there is no reality outside of our mind” and that the “world we perceive exists because of the mind”. Acceptance of this truth is the guiding tool to address common problems like anger, worry, overthinking and negative thoughts. “Our thoughts form our overall character and personality” since mental health is directly related to our emotional, psychological and social well-being. Beyond our conscious mind lies a more dominant subconscious and unconscious mind. “The conscious mind is what we consider to be at work during our waking hours”, while the subconscious mind works “behind the scenes” in all our routine and repetitive activities like driving, walking, bathing, etc. The unconscious is the “storehouse of all our memories and past experiences” and it communicates with the conscious via the subconscious and gives meaning to all our interactions with the world.

The book then turns away from the mind and goes on to delve in the objective reality of the world. It tells the reader that “we live in a largely imaginary and illusionary state, far from the truthful representation of the world around us”. Here, the author mixes the Indian philosophical concept of ‘Absolute reality’ or ‘brahman’ from the Vedas to the illusionary reality of space and time given by Buddha, to Greek philosopher Plato’s famous ‘allegory of the cave’, only to conclude that “we are hardly aware that people have their own construct of reality” and that “we all interpret reality in our own peculiar ways”. He then returns to the human psyche and explains its various limitations like its bias towards negativity, irrationality and “illusionary freewill”.

In the last section, the author presents the ultimate approach to deal with incessant thoughts that surround us. The “science of transforming the mind” lies in the practice of meditation. “Meditation can help bring about a natural sense of peace and well-being that can extend to every aspect of our lives.” There are many types of meditation, like Vipassana, Transcendental Meditation, Taoist and so on, all explained lucidly in the chapter.

The book concludes by saying that “we are ignorant or mis-educated about the working of our own mind” and “even if a small percentage of the population achieve peace among themselves, it can be reflected in the world around them”.

Filled with varied facts and figures and occasional quotes by famous people, the book is a handy read for all of us, who at some point of our lives wonder why we think, behave and react the way we do. Bits of neurology, cosmology, quantum physics, philosophy and psychology make this a wholesome general read without dwelling into the intricacies of any. Among the multitude of books and theses already available on the inquiry of the mind and meditation, the book with thick glossy pages, colourful illustrations and a sum-up at the end of each chapter makes it an appealing pick.

Asked how the bureaucrat finds time from his busy schedule to pursue his interests which include painting, Kumar smiles and praises the power of meditation which helps him mentally and physically and lets him manage time efficiently.