When Ujjwala loses the shine An Ujjwala beneficiary from Asafpur Nagalia village who went back to using conventional fuel for cooking due to high refill cost of LPG cylinder (Photos: Vishwas Dass)

Near a deserted park in Salempur Jat village in Bulandshahar sit a few men discussing politics. Sipping their morning tea, the men are engaged in a heated conversation about upcoming elections, education for the poor, local village issues and rising prices of fuel and LPG cylinders.

Narrating his tale of woe, 52-year-old Bane Singh says that his family was forced to use firewood for cooking again after they stopped receiving subsidies for refilling LPG cylinder. In 2018, Singh’s wife got the cylinder connection under the Pradhan Mantri Ujjwala Yojana (PMUY) after depositing Rs 1,546 with the dealer and submitting necessary documents. They received refill subsidy only for the first two months, which is around Rs 200-250. But the cost of refilling a 14.2-kg cylinder is around Rs 900. (That was the price in November. Prices have fallen since.) As soon as they stopped receiving the refill subsidy for the subsequent months, the couple returned to using conventional fuel for cooking, as shelling out Rs 900 every time was an uphill task.

Launched in 2016, PMUY aims to provide clean cooking fuel to people by giving them subsidised LPG cooking gas connections. The centre hailed its flagship scheme as a huge success after it distributed 6 croreth PMUY LPG to a Delhi resident on January 2.

Top barriers in adoption of LPG in UP

At a glance
Launched in 2016, PMUY aims to provide clean cooking fuel to women who are below poverty line

The govt provides a subsidy of Rs 1,600 (covering cylinder security fee and fitting charges) to state-owned fuel retailers for every free LPG gas connection that they give to poor households

The beneficiary has to buy her own cooking stove. To reduce the burden, the scheme allows beneficiaries to pay for the stove and the first refill in monthly instalments

Buoyed by the initial success, the government is now targeting to distribute 8 crore deposit-free LPG connections to women by 2021 – their initial target of 5 crore connections was completed much before the deadline of March 31, 2019. The centre has even allotted additional Rs 4,800 crore for this purpose, increasing its total budget for the scheme to Rs 12,800 crore. 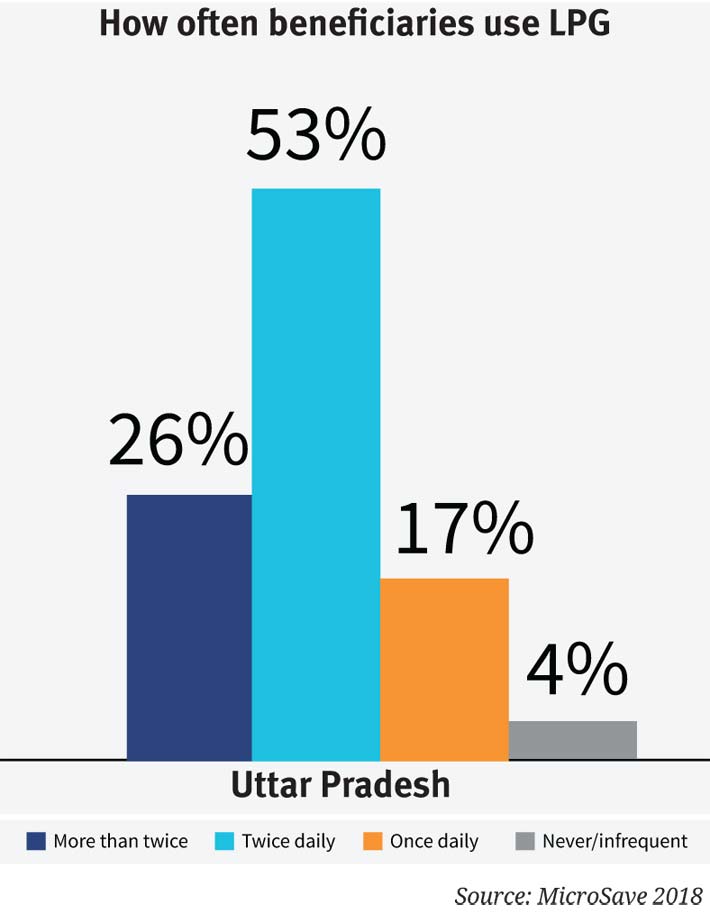 As per minister of petroleum and natural gas (MoPG) and skill development and entrepreneurship, Dharmendra Pradhan, in the 50 years since the launch of LPG, only 13 crore connections were provided, while in the last 54 months almost similar number of connections have been distributed.
Concurs Sanjiv Singh, chairman, IndianOil: “When PMUY was launched in 2016, the penetration of LPG in India was only 62 percent as compared to 89.5 percent now.”
The statement is true to some extent as many villagers in Salempur Jat village have indeed availed subsidised LPG cooking gas connections soon after the launch of PMUY. But most of them have again started using traditional methods of cooking – firewood, cow dung and biomass – as they can’t afford refilling of the LPG cylinders. A large population of the village falls under the category of below poverty line and saving up for a cylinder is a burden for many. In such a scenario, the government’s claim that almost 80 percent of PMUY beneficiaries refill their cylinders falls flat on its face.
Pravendra Kumar is a case in point here. The 35-year-old says that his mother got PMUY LPG connection in 2017 after submitting all requisite documents like Aadhaar, caste and income certificate. She was assured of getting subsidy on every refill. But they did not receive any. Moreover, the mother-son duo along with other villagers were conned by the gas agency dealer. The mini truck comes to their village on the 3rd, 13th and 23rd of every month. The delivery boy charges Rs 30 extra for the delivery of cylinders. Kumar says that the delivery man never gives a receipt for this additional charge, an amount which he is not supposed to charge in the first place. Not being able to afford the cost of refill and an additional sum of Rs 30 forced Kumar to stop using the LPG cylinder altogether. 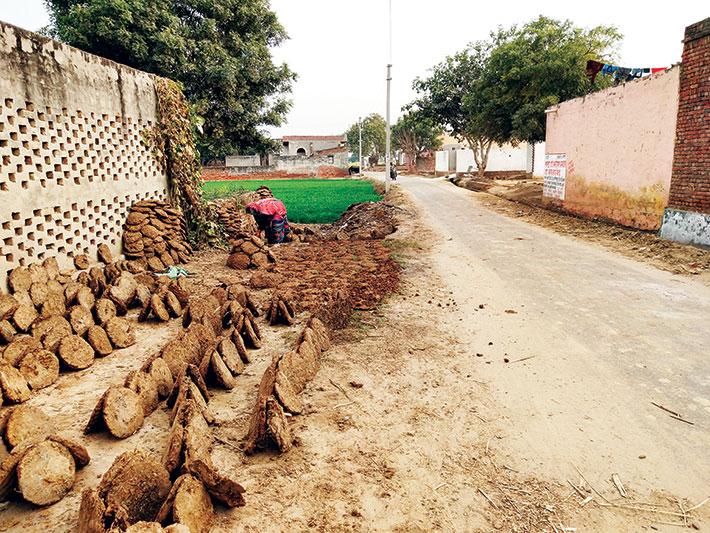 Data (2016) from a CRISIL study commissioned by the government’s Petroleum Planning and Analysis Cell (PPAC), an arm of MoPNG, reveals that key barriers for not applying for LPG connection are high initial cost, including security deposit / price of gas stove (86%) and high recurring cost of the cylinder (83%).
That was before the launch of Ujjwala. Sanjay Pradhan, gram pradhan of Salempur Jat village, maintains that villagers are refilling their LPG cylinders and hails the scheme for safeguarding the health of several women. He says that except for a few cases, majority of villagers are getting subsidies into their accounts. Those who do not receive subsidies, he claims, must have not linked their Aadhaar details with bank accounts.
Another village, same story
Around 20 kilometres away from Salempur Jat is Asafpur Nagalia village in Khurja tehsil, Bulandshahar. Women in this village who talked to the reporter were of the opinion that the government is just prioritising on distributing more and more Ujjwala connections than making the scheme affordable for the poor. Majority of people in this village are jobless and the youth have migrated to nearby Gautam Budh Nagar to earn livelihood. Those who remain behind, mainly women and old people, are not able to pay for the refill even if they get Rs 200 subsidy. Travelling distances to the nearby collection centre to refill the cylinder and then carrying back those heavy cylinders is not only burdensome but also incurs an additional expense. As a result, the villagers often use firewood or cow dung for cooking, which costs nothing.
Vikram Singh, a resident of Asafpur Nagalia, says that the LPG cylinder is used only when some guests arrive or during rainy/winter season, when it is difficult to find dry firewood. The village has very limited employment opportunities. People often fail to raise money to send their kids to school in cities or small towns, leave alone saving for an LPG cylinder, he adds. 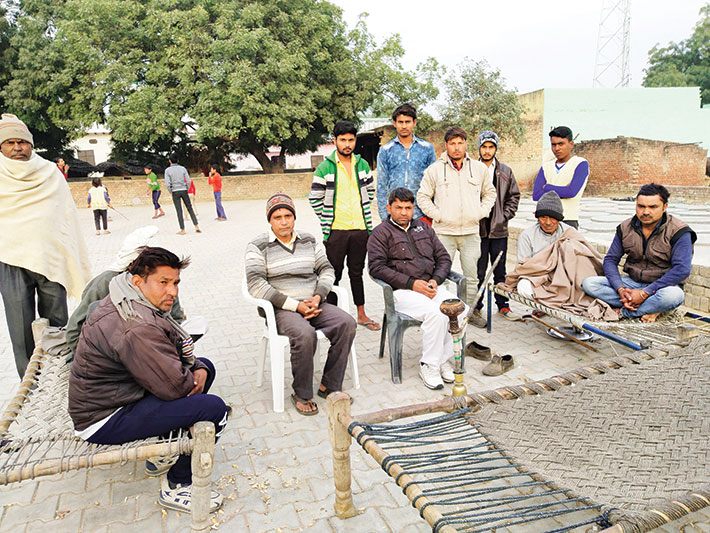 Men from Asafpur Nagalia village discuss upcoming elections, education for the poor, and rising prices of fuel and LPG cylinders

For Shalindri Devi it was only after several visits and numerous requests to the local dealer she finally started receiving her refill subsidy. Shalindri has two general LPG connections. Though all her paperwork is in order, she did not receive any refill subsidy for three consequent years. After visiting the local dealer many times she finally received the subsidy of Rs 2,500. The years-long hassle and the high cost of refill have made her switch back to the conventional fuel.
Heera is one of the few in the village who prefers LPG over firewood and refills the cylinder every time, even if it means travelling for 3 km to the LPG agency. Though he regularly gets the refill subsidy of Rs 199, yet he maintains that the prices should be reduced.
Way forward
High cost of LPG refill has been the primary concern for most Ujjwala beneficiaries. Keeping this in mind, the oil marketing companies (OMCs) introduced a more affordable 5 kg refill option whereby a beneficiary can swap her 14.2 kg cylinder with a 5 kg one and vice versa. The government claims that 1,33,869 people have taken advantage of the swap scheme as on December 31, 2018.
But villagers in Bulandshahar district say that though a 5-kg cylinder is cheap, it doesn’t last long and they have to frequently visit the agency, which means shelling more money and effort. A 14.2-kg cylinder lasts for more than two months.
Lack of doorstep delivery also hinders a lot of people from switching completely to the LPG. To resolve this issue, the OMCs are planning to add 835 distributors pan-India by March. As on December 1, 2018, there were 22,639 LPG distributorships at industry level.
“With the increase in LPG demand on account of PMUY, the oil marketing companies – IndianOil, BPC and HPC – have lined up massive infrastructure plans, including setting up of 60 new bottling plants with private participation, and building of new LPG pipelines. For these plants with a capacity of 30,000 tonnes annually, the total investment will be of Rs 4 billion,” says Singh of IndianOil.
The government should not only reduce the prices of the refill for Ujjwala beneficiaries but also make these connections a hassle-free affair for them. Collecting firewood and cow dung is an easy job for most of the beneficiaries, so the LPG has to be made simple for them.
Moreover, after talking to the villagers in Bulandshahar district it is evident that people want the government to focus more on their overall development and create employment opportunities in their villages rather than just focussing on schemes and increasing the numbers.
vishwas@governancenow.com
(This article appears in the March 15, 2019 edition)