Rising NPAs as a principal-agent problem

A new report demystifies NPAs, clears misconceptions and makes a strong case for transparency in the banking sector 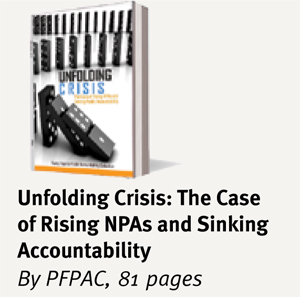 A contract with a proper incentive structure can solve the problem. The problem of rising non-performing assets (NPAs) in Indian banks, especially the public sector banks, can be easily analysed as a principal-agent problem. The agents – the banks – are not taking actions in the interest of the principal – the public. Whether it is the loans generated out of deposits in a bank or the huge amounts coming in from the budget as capital infusion to tackle the problem of rising NPAs, we are essentially talking about the public’s money.

In the case of public sector banks, we have a terrible incentive structure as a result of lack of transparency in the functioning of the sector and the resultant lack of public scrutiny and accountability. Adequate data is not available and the discourse based on the limited data that is available also uses a language not so easily comprehensible for the common citizenry. Along with the call for increased transparency, we have to start talking about the data that is available in a language that is trying to educate and spread awareness among the general public.

The first publication of the Public Finance Public Accountability Collective (PFPAC), Unfolding Crisis: The Case of Rising NPAs and Sinking Accountability, tries to do this. The report demystifies the concept of NPAs, clears many common misconceptions and makes a strong case for increased transparency in the sector in a language that is accessible to the common public.

Being devoid of bad loans is impossible. But the problem is having too many of such loans. This makes it important to look at gross NPAs as a percentage of gross advances and the changes in this ratio. The report illustrates that the percentage of gross NPAs to gross advances has increased sharply from 2.26% in March 2007 to 4.27% in March 2015. This shows how the rate at which NPAs are rising in Indian banks is significantly greater than the rate at which gross advances of the sector is increasing. This is a serious concern.

Evidence from the report shows how public sector banks account for almost 86% of these NPAs. However, private banks have managed to bring down their NPAs as a proportion of total NPAs over the years. Gross NPAs as a percentage of gross advances stood at 2.10% for the private banks in March 2015 and at 4.96% for the public sector banks. The data for the recent months will have to be adjusted for certain definitional changes to ensure comparability across time. The report also shows how it is no longer the priority sector that is the major contributor to the NPAs.

And on the other side we have banks and the government also being reluctant to reveal the names of even wilful defaulters and offering many defaulters schemes of debt restructuring, which has resulted evergreening of NPAs.

The case of Kingfisher and rising virtual assets as collateral and the very unimpressive performances of most government and RBI schemes to tackle the problem of rising NPAs make it very clear that the way forward is increased transparency and accountability. This would result in the right incentive structure and the banks paying due diligence at the time of issuing loans. It is hence important to educate the public about this issue and build the right pressures. An effort like that of the PFPAC becomes extremely important for this reason.