Beginning with Tamil Nadu in 2016, domino effects have spread in 2017 to several states and the total cost of farm loan waivers announced amounts to around Rs 1,30,000 crores, which is 0.8 percent of GDP, said Reserve Bank of India governor Urjit Patel.

In his opening remark at a seminar on agricultural debt waiver – efficacy and limitations on Thursday, Patel said that in the recent period, farm loan waivers have engaged intense attention among the farming community, policy makers, academics, analysts and researchers.
“On the one hand, there is a gamut of issues that have intensified the anguish of our farmers. In this context, farm loan waivers have brought forward the urgency of designing lasting solutions to the structural malaise that affects Indian agriculture. On the other, there are concerns about the macroeconomic and financial implications, how long they will persist in impacting the economy, the possible distortions that they could confront public policies with, and the ultimate incidence of the financial burden,” he added. 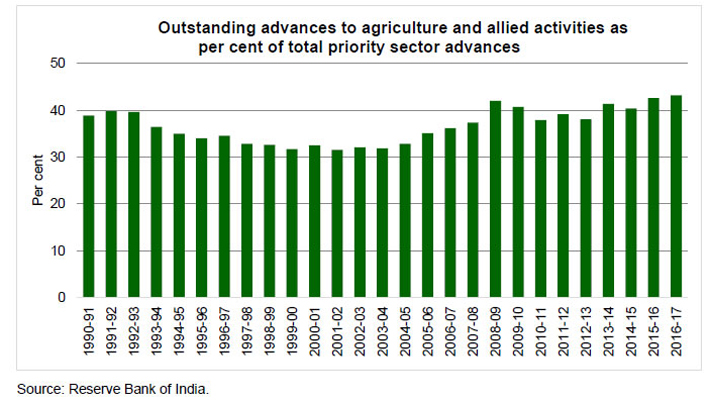 Patel explained that India's agrarian economy is the source of around 15 percent of GDP, 11 percent of our exports and provides livelihood to about half of India's population.
“The importance of the sector from a macroeconomic perspective is also reflected in a significant flow of bank credit to finance agricultural and allied activities relative to other sectors of the economy. Outstanding bank advances to agriculture and allied activities have risen from about 13 percent of GDP originating in agriculture and allied activities in 2000-01 to around 53 percent in 2016-17. In real terms (adjusted for inflation measured by the GDP deflator), the growth of bank credit to agriculture and allied activities
accelerated from 2.6 per cent in the 1990s to 15.4 percent during 2000-01 to 2016-17.
“…without exaggeration, it is safe to say that financial flows to agriculture have been generous,” he added.
Patel went on to say that despite the sizeable volume of subsidised and directed credit flows as well as the various fiscal incentives, Indian agriculture is beset with deep seated distortions that render it vulnerable to high volatility.
“It has perennially been characterised by low investment, archaic irrigation practices, monsoon dependence, fragmentation of land holdings and low level of technology. Lack of property rights and low initial net worth of farmers add to the constraints.
Consequently, considerable flux in output and prices is common, imposing large losses on farmers and potentially imprisoning them in a circle of indebtedness with disturbing frequency. Therefore, in the absence of coordinated and sustained efforts to put in place elements of a virtuous cycle of upliftment, loan waivers have periodically emerged as a quick fix to ease farmers’ distress.”
He said that the first major nationwide farm loan waiver was undertaken in 1990 and the cost to the national exchequer was around Rs 10,000 crore, which works out to Rs 50,557 crores at current prices using the GDP deflator.
The second major waiver was under the agricultural debt waiver and debt relief scheme (ADWD) of 2008 amounting to Rs 52,000 crores (0.9 percent of GDP) or Rs 81,264 crores at current prices using the GDP deflator. Unlike the 1990 scheme that aimed at providing blanket relief to all farmers up to a certain loan amount, the 2008 scheme waived debt for certain classes of cultivators1.
“In 2014, Andhra Pradesh and Telangana announced farm loan waiver of Rs 24,000 crores and Rs 17,000 crores, respectively. Beginning with Tamil Nadu in 2016, domino effects have spread in 2017 to several states and the total cost of loan waivers announced amounts to around Rs 1,30,000 crores (0.8 percent of GDP),” said Patel.