On World Food Day, the country needs to focus on promoting the dying practice of locally producing food by aboriginals like Baigas and Gonds After spending almost a month among tribals of Mandla in Madhya Pradesh, I can confidently say that by restricting ourselves to Public Distribution System (PDS), we cannot solve the food security issues of the country.   The problem is graver. In a district like Mandla, where aboriginals like Baiga and Gonds have been exposed to a different culture in last one decade, they have gradually moved away from the traditional food security system.

Families are getting food through Public Distribution System (PDS), a government scheme that ensures 35 kilos of wheat and rice to every household.  But a family of seven or eight people is able to sustain on that ration for only a week or ten days. The question is how to survive for the remaining month?  They have no source of livelihood except to work as migrant labour. With the limited money, they buy only one or two vegetables from the market for an entire week and that too in small proportions, which is insufficient for the entire family. Those who are worst off survive on fermented liquid rice called pej for the entire day.
The story is similar in almost every household, be it a family belonging to Baiga or Gond tribe. This was not the situation a few years back.  It was the time when they were deeply connected to their traditional food system, comprising diversified food especially maize and millets along with forest produce like tubers, mushrooms and green leafy vegetables.
Maize and minor millets like kodu and kutki were once the staple food of Baigas.  Generally, they used to consume it after fermenting and sometimes with coarse rice.  Often, they used to add tubers and roots collected from the forest.  Kodu and Kutki are rich source of fibre, calcium, iron, potassium, zinc and magnesium. It protects heart, controls cholesterol level, diabetes and asthma.  They used to grow it for their own consumption so that it could last for a year or a two. 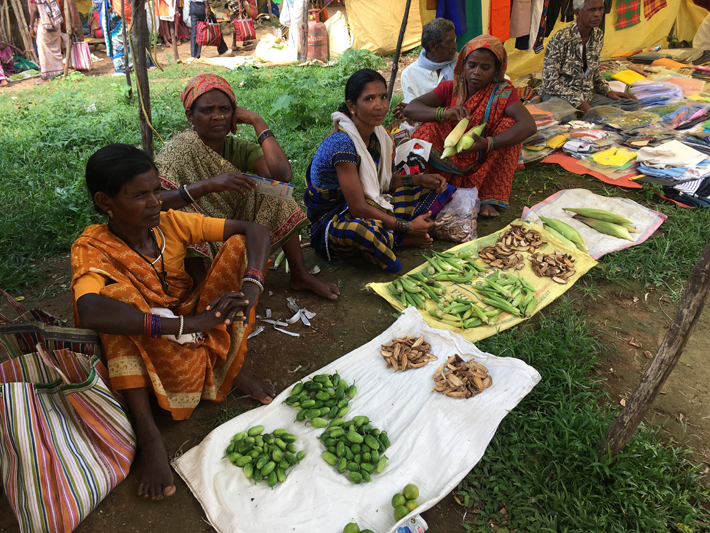 To earn livelihood, there was a time when they tried selling it. But there weren’t enough buyers. So they stopped growing it. In 2008, where the overall kodu/kutki production was 1357 quintals, it reduced to 472 quintals in 2015-2016.  Today, few private companies from Nagpur are buying kodo/kutki from local mandis to manufacture biscuits that can help cure diabetes.
Similarly, a variety of mushrooms, a rich source of protein, vitamin and iron, which were once a part of their diet, is now a rare sight in the local market.  People here used to consume more than 20 varieties of mushrooms that were grown in different seasons.  Now, they only get two to three different varieties.  That too they sell it in the market to fulfill other requirements.
They even collected a variety of leafy vegetables from forests. But they are no longer permitted to do so by forest officials. So, in monsoons they collect green leafy vegetables that grow near streams and ponds. Women used to boil and dry them so that it can be used in summers when nothing is available.
Generally, they consume chakoda and chech plant (cassia tora) leaves, a rich source of calcium.  They also collected ten different varieties of roots and made chips out of it. This too no longer exists.
In their badis - a small area outside their hamlet - they generally grow corn.  They preserve corn for the dry season to make pej.  Corn is a rich source of vitamins A, B and E, natural fibres and minerals.  Since, sustenance has become a major concern, they now grow mustard instead of corn. According to them, they won’t have to buy mustard oil from the market for at least three-four months and the seeds that are leftover can be sold in the market.
This nutrient rich food system is getting lost.  People are getting away from their traditional food system and not getting quality food. Only PDS has raised their cereal intake.  The effort should be to promote and create market for these traditional food items so that people can see it as a source of livelihood. These local crops should be included in midday meal and the Integrated Child Development Services to deal with the problem of malnutrition. It will help in changing the agricultural pattern, which is the need of the hour.
All these benefits go well with this year’s theme of World Food Day - Change the future of migration. Invest in food security and rural development. If states are able to do so, we can improve our ranking in Global Hunger Index, which has  slipped three places, putting  India at 100th position  among 119 nations.