Gandhi in Marseilles, in 1931, with (facing him) C. F. Andrews and (to his right) Devadas Gandhi (Image from `Scorching Love`, courtesy OUP)

Gandhi’s era happened to be an era when letter-writing was a primary mode of communication. When not meeting in person, two individuals sent missives to each other, rather than calling up on phone. That cultural peculiarity left for us a rich collection of Gandhi’s correspondence, an archival record of thoughts, activities, relationships and more. And Gandhi wrote incessantly. His correspondence ranged from long memorandums to viceroys to one-liner spiritual advisories to young children. 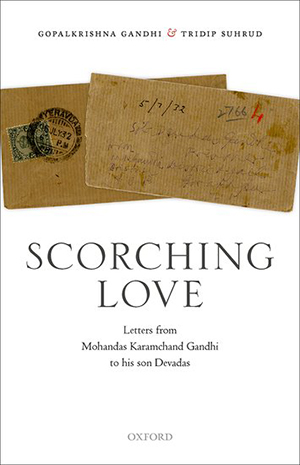 The whole of his correspondence, as well as his numerous speeches, editorials in a number of journals, media interviews and other textual material, was put together in the Collected Works of Mahatma Gandhi, running into a round figure of 100 volumes in English, and fewer in Gujarati and Hindi. Nehru initiated that project in the 1950s, and it culminated in the 1980s.

'CWMG', as it is known, has been the final word from and on Gandhi for the scholars. But given the imperfections the real life it has had to negotiate, it can never be a complete collection; much has been missing from it. A quite critical segment that was missing has come out now. Close to 200 of Gandhi’s letters to his youngest son, Devadas Gandhi, had not come out in the public domain so far. Gopalkrishna Gandhi has now compiled them and Tridip Suhrud has translated them from Gujarati to English, with an introduction and explanatory notes in this indispensable volume.

Gandhi wrote the first letter to “Chi. Devadas” (Chi. stands for ‘chiranjeevi’, wishing a long life for the addressee) from Cape Town in 1914, and the last letter was on January 14, 1948, barely a fortnight before his assassination. During these 34 years, there were a total of 304 letters from father to son. As many as 113 of these appear in the CWMG. “The originals of most of these were made over by Devadas to the Sabarmati Ashram or the nascent offices of The Collected Works of Mahatma Gandhi,” the introduction notes. “The rest were kept aside by Devadas for, one may assume, a compilation exercise of his own, with inclusion and exclusion decisions taken by him alone. His sudden and premature death on 3 August 1957 laid that interest to uneasy rest. This volume seeks to resurrect that unfulfilled idea and hopefully does so with such fidelity to his scheme as can be visualized.”

The volume, then, puts together all of the 304 letters, a majority of them appearing in print for the first time. Spread over five sections, each with introductory notes providing a context, the letters are, at once, political and intensely personal. In what they seek to say about politics and society, they hold pointers to the future of the sub-continent of India.

Gandhi wrote these letters by day, he wrote them by night, he wrote them from aboard trains, steamers, both right and left hands being pressed into service to rest one when tired out.

The letters span three decades during which the writer grew from being a fighter for the rights of Indians in South Africa to being hailed as Father of the Nation by millions in India and – opposed by many as well including the man who felled him by three bullets fired at point blank range on 30 January, 1948. The letters hold his aspirations for his son and for his nation. They bear great love and they also scorch. And we see Devadas, the recipient of the letters, move in them from compliant childhood and youth, to adulthood, questioning and remonstrating with his father and being just the independent son his father wants him to be.