Cycling is a passion for many, and it is a way to fitness too. With rising numbers of vehicles on the road, the government encourages this environment-friendly mode of transportation, but it comes with numerous challenges. An accident last month on the Mahipalpur flyover of south Delhi, which took the life of an avid cyclist, Subhendu Banerjee, raises many questions. The first and foremost question is: Do we have the right kind of infrastructure for cyclists?

In Delhi-NCR there are many cycling groups whose members ride almost daily to encourage people to come out of their sedentary lifestyle. But the risk level is too high.

This incident has left a scar in the hearts of Banerjee’s fans. A 50-year-old health-freak Subhendu inspired others to take to cycling. His death has left the cycling groups in grief and worry. Around 50 groups of cyclists and athletes from Gurugram, Delhi, Noida, Faridabad and Ghaziabad plan to hit the streets, as a protest ride, demanding better cycling infrastructure in the city. They plan to ride to Teen Murti Marg area in the capital on December 4 to raise awareness among cyclists and speak their voice for the right kind of infrastructure.

An ‘endurance cyclist’, Subhendu was killed on Delhi-Gurugram Expressway which prohibits the two-wheeler riders and cyclists, yes, but doesn’t this incident highlight the infrastructure cyclists lack? Banerjee's death has renewed the discussion on the safety of cyclists in the national capital and NCR.

Enough has already been on talked on this but some bullet points here will recap the discussion:

* Is Delhi not a cycle-friendly city? Government’s tall claim to encourage more people to ride a cycle often in place of motorised transport seems futile when we have a look at the numbers. Government data reveals the true picture. As per the National Crime Record Bureau (NCRB) report, there has been a close to 100 percent rise in the number of cyclists killed in road crashes. In the last four years from 1,614 deaths in 2018, numbers have gone up to 3,006.

The number of accidents on these roads reflects poor planning. While planning and designing the infrastructure of the city, roads are constructed to smoothen the traffic but no heed is paid to the needs of the cyclists who are one of the most vulnerable. Even in metropolitan cities like Delhi and millennium city Gurugram, There is hardly any track or path dedicated to cyclists. Even the Delhi-Gurugram expressway corridor, which stretches 27 km, lacks any such facilities. 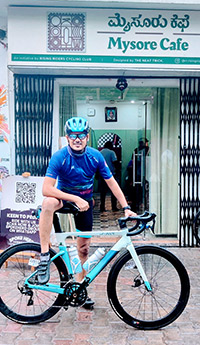 On the needs of the cyclists who risk their lives daily on Delhi-NCR roads, we spoke with Amit Daga, a triathlete and founder of Folks On Forks (FOF) which is the largest cycling club of Delhi NCR with 300+ cyclists. (The group was formed in 2020, and it has multiple sub-groups under its umbrella, focussing on different types of cyclists and providing training on safe and efficient cycling.)

What is the purpose behind organising a Memorial Service Ride on December 4?
We are doing this memorial service ride to remember a dear friend and a veteran cyclist and share his road safety ideas with the rest of the cycling community. We are also looking for the government and administration's attention towards providing more robust and safe infrastructure for the cyclists, especially the daily commuters. It is being organised to draw the authorities' attention towards the dismal state of infrastructure in the capital region.

Who are the major cycling groups involved in organising the event?
We have the support of many cycling groups across Delhi-NCR. Each person present in the event (be it a part of a group or joining on individual capacity) would add value and strengthen our efforts. Folks on Forks, Raftaar, Delhi Cyclists, BB and South Delhi Cyclists are some major groups involved in organising the event.

Does Subhendu's death reflect the lack of infrastructure and poor planning?
The roads in India are not democratically divided for the users, the numbers of cyclists are any day larger on the roads than any other mode of transport; still we have relatively small or no cycling lanes. And even if there are lanes in few places, which anyways is negligible, are encroached by stalls and hawkers or garbage, which makes them unusable. And when it comes to sports cycling, we do not have any infrastructure at all where athletes can go and train themselves, so no choice left but to venture on traffic roads.

What needs to be done to avert such incidents?
It's a long list, starting from educating our children about the importance of values of each and every life, and not just human but stray animals as well. My daughter has been failing her driving licence test multiple times, I have been lured by an "agent" to pay some bribe to get her licence made, but I know I am not going to do this. However, I am sure a lot of parents and young drivers do this to get a driving licence quickly. This is where the problem starts!

We need to have stricter norms for letting people go on the road driving a vehicle in the first place so that the drivers are properly educated about the basic etiquettes and discipline of driving on public/traffic roads. In many cities across the world, there are special paths and tracks just for cyclists. Even in Gurugram, which is known as the Millennium City, there is no dedicated path for cyclists. We need cycling lanes throughout the country on busy roads for the safety of cyclists. All sports stadiums must have track for sports cycling, so that the sports enthusiasts are not forced to take public roads.

When it comes to cyclists, all cyclists must strictly use the safety and precautionary gear while cycling, must ride in groups, as a bunch of cyclists is more easily visible on highways than a solo cyclist, avoid riding on expressways.