The rise of global inequality has not been steady, said the World Inequality Report The rise in income inequality has been gradual in India, said the World Inequality Report which noted that at the global level, inequality has risen sharply since 1980, despite strong growth in China.

The report said that inequality within world regions varies greatly. In 2016, the share of total national income accounted for by just that nation’s top 10% earners (top 10% income share) was 37% in Europe, 41% in China, 46% in Russia, 47% in US-Canada, and around 55%  in sub-Saharan Africa, Brazil, and India. In the Middle East, the world’s most unequal region according to our estimates, the top 10% capture 61% of national income. 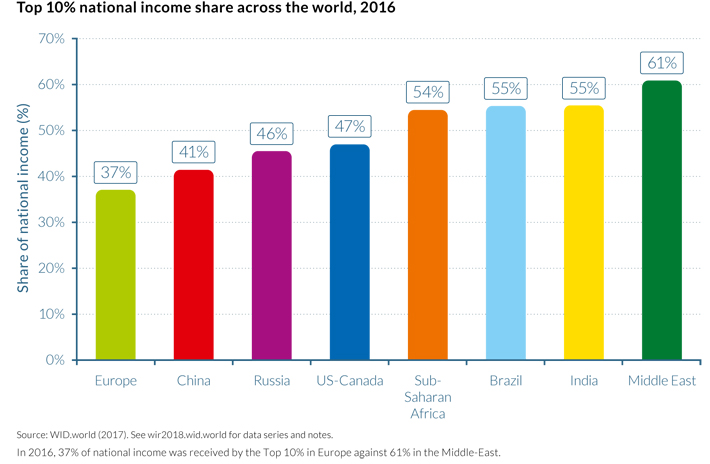 “Since 1980, income inequality has increased rapidly in North America, China, India, and Russia. Inequality has grown moderately in Europe. From a broad historical perspective, this increase in inequality marks the end of a postwar egalitarian regime which took different forms in these regions,” it said. 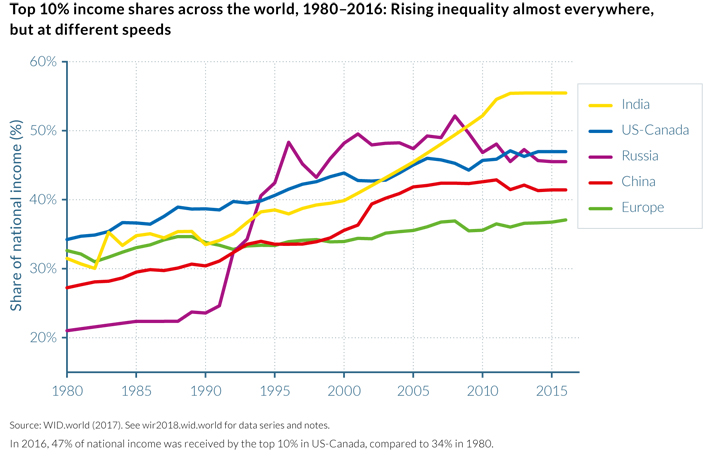 The rise in inequality was particularly abrupt in Russia, moderate in China, and relatively gradual in India, reflecting different types of deregulation and opening-up policies pursued over the past decades in these countries, added the report.

At the global level, inequality has risen sharply since 1980, despite strong growth in China. The poorest half of the global population has seen its income grow significantly thanks to high growth in Asia (particularly in China and India). However, because of high and rising inequality within countries, the top 1% richest individuals in the world captured twice as much growth as the bottom 50% individuals since 1980

The rise of global inequality has not been steady. While the global top 1% income share increased from 16% in 1980 to 22% in 2000, it declined slightly thereafter to 20%. The income share of the global bottom 50% has oscillated around 9% since 1980. The trend break after 2000 is due to a reduction in between-country average income inequality, as within-country inequality has continued to increase.