Stepping up the stepwells

Delhi’s heritage water bodies are nothing but stagnant pools of filth. Can their revival help resolve the water crisis? Rajon ki Baoli is said to be built by Daulat Khan in 1516 during the reign of Sikander Lodi. (Photo: Ridhima Kumar)

The air is cool and humid. Early morning drizzle has weakened the scorching June sun. Amidst the lush greens of the Mehrauli Archaeological Park, the 16th century stepwell called Rajon ki Baoli is a sight to behold. 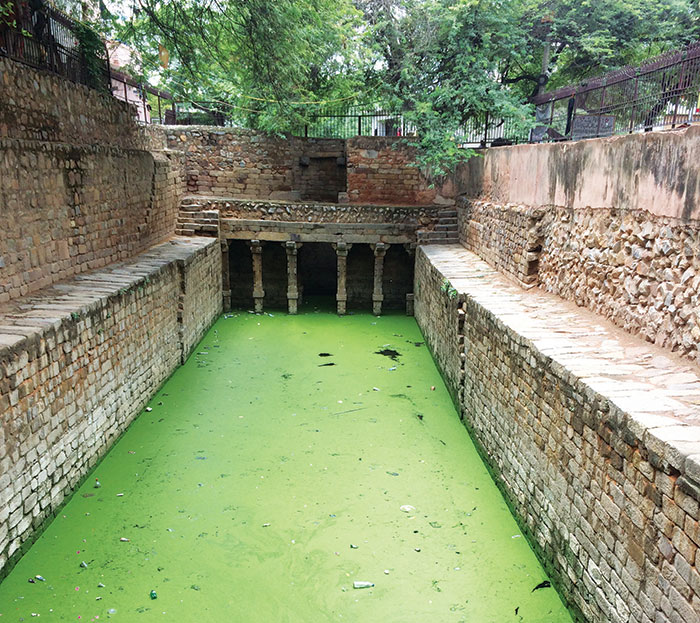 A strong, nauseating smell greets me as I enter through the small gate to the baoli. Legend has it that the baoli derived its name from the sulphur (gandhak) in its water, giving it medicinal properties, useful mainly against minor fungal infections of the skin. But now, it is difficult to tell whether the source of this smell is the sulphur or the litter all around.
Without much elaborate masonry work, the baoli descends five levels below the ground. Restored by the ASI, the lower four levels are filled with water. But a thin layer of green algae and some plastic bottles here and there obstruct the vision. Some torn clothes and garbage are heaped on one side of the stepwell.
The baoli is enclosed by four-five storey buildings, offering a swimming pool-like view to its residents. As per the ASI board outside, construction within 100 metres of the monument is not permitted, but newly constructed buildings can be seen in the surroundings.
***
Blame it on people’s apathy or government inaction; baolis are fast disappearing from the city’s landscape. What is needed is awareness among people about the significance of these stepwells – both in terms of its heritage and its water conservation purpose. “A dead man in a grave cannot cast his vote. So he is not important for a politician. Unless that dead man or building becomes important for an average citizen, the politicians will not care about it. So the solution starts from us and not from the parliament,” says Rooprai.
Also, some activists feel that blaming the government for everything wrong is not right. “The state department has been helpful and is supportive of conservation of monuments including baolis in Delhi. A few years back we did not even have heritage laws. Now we have them,” says Liddle.
And as far as improving the water situation of Delhi is concerned, the city needs to work on an “intelligent” system and preserving and restoring baolis can be the first step. As Mishra tells Dasgupta in Capital: “Delhi has water, it has lots of water... But water needs a system. And whereas Delhi once had an intelligent, scientific system [baolis and water bodies], it now has no system at all.”
ridhima@governancenow.com
(The story appears in the August 16-31, 2017 issue of Governance Now)