Aadhaar: On a sticky wicket

As arguments continue for and against the biometric authentication system, a look at the technology related criticism of Aadhaar In April, the Institute of Chemical Technology (ICT), Mumbai was making news. Its ranking in the National Institutional Ranking Framework (NIRF) 2017 dropped from the second position to 25th. In the same month, the institute was again trending, for another reason. A mischief by a group of third and fourth year undergraduate students not only surprised the top management of the institute but also the political heads in the government.

Let’s start at the very beginning. Like most colleges and universities, the ICT mandates that students must have 75 percent attendance to appear in the final exams. To ensure this, the institute two years ago installed biometric devices in every classroom. Soon some students figured out a way to tweak this rule. They found that they could mark their attendance by using any biometric device kept in any classroom. A student need not go to his/her specific class to mark the attendance. As a result, in the past two years, over 350 students, including ‘hostelers’ and day scholars, marked their attendance without actually attending their classes.

Also Read Interview: UIDAI CEO AB Pandey on safe and secure Aadhaar database
The students took this prank to another level last year. Some of them researched several videos on YouTube to learn the process of making duplicate fingerprints. After browsing through several such videos and educating themselves in the hacking tools, it was time to experiment. Their method was simple: they took a matchbox, removed its cover, filled it with liquid wax and pressed their index finger against it. Once dry, a reverse image of the fingerprint gets imprinted on the wax. To bring it to its original form, the students spread sticky Fevicol glue over it, and left it for 12-16 hours until it solidified – the climate in Mumbai anyway remains humid during summers. And, voila, a duplicate fingerprint impression was made. However, this was just one part of the experiment. The real test lay in actually checking the fingerprint against the biometric device in the institute.
High on their invention, the students immediately went to test it. Their first attempt was in September. They did not succeed. They tried again for two or three days, but failed. Not losing their hope, they tried their luck with silicon polymer this time. They heated it a little – 60-70 degrees maybe. They hammered it to make a plane surface and pressed their fingers on it. “That didn’t work out,” says a member of the institute aware of the incident. Then they again tried the wax-glue technique in December. And it worked!
How a fingerprint can be duplicated 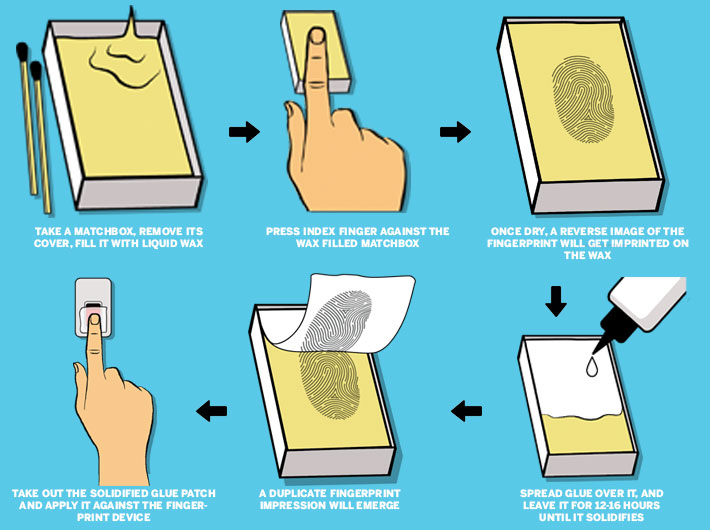 From January to April, the students exploited this new vulnerability in the attendance system to its full potential. But all good things must come to an end. One day a student went to the college dean’s office with a request to mark his attendance for a particular day. During his cross-questioning, one thing led to another, and before he realised, the student had spilled the beans.
The students were reprimanded. The college decided to decrease the semester grade point average (SGPA) score by two points for the students involved. Musab Qazi in his report in the Hindustan Times quoted vice-chancellor GD Yadav as saying, “Even though the attendance records showed otherwise, we suspected that the students were not attending classes because they performed poorly in their exams. Then we came to know that they used polymer films to mark their attendance.” The VC, in other words, admitted the biometric attendance system was hacked. However, the students didn’t use polymer film; but wax and glue.
When Governance Now spoke to Yadav, he said he was misquoted by the newspaper. He denied any hacking of the biometric device. The students, he said, had not duplicated the fingerprint, but rather went to the adjacent classroom to mark their attendance.
Notwithstanding the scale or even veracity of the attendance rigging controversy, the ICT students seem to have exposed the most fundamental flaw with the fingerprint-based authentication systems used across the world –they can be easily copied and spoofed. Of late, there have been incidents wherein researchers and journalists have revealed technical and systemic glitches in the Aadhaar ecosystem only to be chased away by the government. Aadhaar has otherwise been criticised for infringement on an individual’s right to privacy and the possibility of profiling. Let’s take a look at the technology-related criticism of Aadhaar.
Hardware security
Thanks to a few incidents which came to light this year, the UIDAI has decided to build a secured hardware ecosystem. A series of ‘replay’ attacks showed that the fingerprint devices in use are leaky and prone to hacks. In a replay attack, the biometric data of a user is saved on the device during authentication and used afterwards for future authentication. One such incident surfaced when a UIDAI communication sent to one of the authentication user agencies (AUA) was leaked. In its letter, the authority had sought explanation from the AUA about how they could do multiple and simultaneous authentications using the same biometrics on January 11. The leak was followed by a police complaint against Axis Bank, Suvidha Infoserve (business correspondent service provider) and eMudhra (e-sign provider) for doing ‘unauthorised transactions’.