Reality As It Is: The Buddha's advice on overcoming bias, prejudices Sarnath, near Varanasi, where the Buddha delivered his first sermon. (Photo: AM)

‘See Things As They Are’: Life Lessons from the Buddha 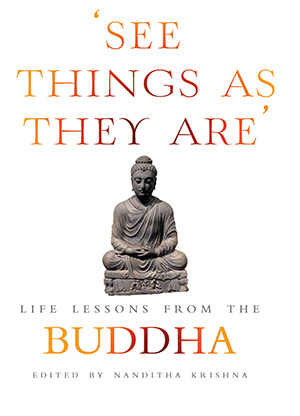 There is a wonderful idea behind the ‘Life Lessons’ series from Aleph: distilling the wisdom of seers and sages in a brief, reader-friendly format. Also, the slim volumes are elegantly produced. In this series edited by Nanditha Krishna, we have had inspiring thoughts from Hazrat Nizamuddin, Swami Vivekananda, Lal Ded, Mahavira, Guru Nanak, Adi Shankara and Moinuddin Chishti. Each begins with a helpful introduction, followed by selected excerpts from the words of the master. The latest volume is devoted to the Buddha.

This book, unfortunately, suffers from two kinds of problems. Firstly, politics of Hinduism colours the introduction in a way that makes the title ironic. What is more unfortunate is that when seeking out life lessons from the Buddha, those historical claims are not even relevant, and yet an effort is made to answer imagined criticisms of Hinduism. Secondly, there are editing and proofreading issues.

The second variety is harmless. The young prince was born in the ‘Shakhya’ clan in the Editor’s Note, whereas in the Introduction, it is ‘Shakya’ clan. He was born in “Magadha or modern Bihar”, according to the Editor’s Note, whereas the Introduction rightly mentions Lumbini in “present-day Nepal”. When the Buddha “told Rahula to cultivate mediation on love and kindness”, he must have meant “meditation”. The definite article before ‘Buddha’ has been treated as optional.

But the first variety of inaccuracies is not so harmless. Here is an incomplete list:

* “In Buddhism, desire and ignorance lie at the root of suffering.” For something so preliminary, it is rather surprising that the trio is incomplete here – in not one but two instances (p19 and p29). There are not two but three elements: ‘raag’, ‘dvesh’ and ‘moha’ (or ‘avidya’) – desires/attachments, aversions/dislikes and ignorance of the way the world really works. This is something a Hindu can underline with pride, as the Buddha was only reaffirming the three causes mentioned in countless Hindu scriptures. Shying away from mentioning ‘hatred’ is a good example of the third item in this list.

* ‘Dhamma’ is a word best left un-translated even for global audiences. Glenn Wallis, in his translation of the Dhammapada gives some idea of the large lexical range of this multivalent term: phenomena, mental objects, morality, righteousness, law, foundation, custom, standard, teaching, truth, and much more. Notably, ‘doctrine’ is not included in his long list. The Monier-Williams dictionary grants it, but after presenting a couple of dozens of better alternatives. When someone chants the ‘tisarana’ (three refuges) and says “Dhammam saranam gachchhami”, she is likely to be taking refuge in Truth, Law of Nature or the Teaching, and not “in the Doctrine”, which has dubious connotations too. Hinduism is Dharma; Hindutva a doctrine.

* “Did the Buddha break away from Hinduism?” The answer we will be given is obvious: That he was proud of his caste, he described himself as a reincarnation of Rama, and so on. Such claims, in as many words, cannot be found in the Tipitaka, the authentic record of his teachings. In any case, the question is unnecessary for learning life lessons from him.

* Yet, this dubious line of inquiry is enthusiastically pursued. “In the last chapter of the Dhammapada he says, ‘Shame on him who strikes at a Brahmana…” But did the Buddha mean the one born in the caste of Brahmins? If the reader bothers to pursue that chapter further, she would have been surprised. The Buddha devotes several verses there to define his notion of ‘Brahmana’. Like Gandhi insisting on identifying himself as a ‘sanatani’, every great thinker uses the lexicon of his day and gives it a radically new meaning. For the Buddha, ‘Brahman’ was a person progressing on the path of moral discipline and not a member of a certain caste. As for that caste, he says: “The talk of these brahmins learned in the three Vedas turns out to be laughable, mere words, empty and vain” (Dighanikaya 13.15). One can go on giving examples on these lines.

* The Introduction concludes that the Buddha was “a conservative”. It’s debatable, but here the case is made on dubious claims. No one who has actually studied his teachings claims him to be anything less than radical.

* We are told “he did not speak of the soul”. In that case, what is the Buddha’s theory of no soul (Pali: ‘anatta’, Sanskrit: ‘anatma’)? It is at the core of his teachings, and one of the three great characteristics of reality for the Buddha, along with ‘anichha’ (‘anitya’, impermanence) and ‘dukkha’ (suffering).

* Over centuries, some sanghas certainly must have degenerated with some monks committing malpractices. That is true for any sect, any organised religion; no need for proof. But offering ‘Mattavilasa Prahasana’ as evidence is pointless: as the title itself states, it was a comedic play meant to ridicule Buddhist monks, and not a historical text presenting facts.

For a short introduction to the wisdom of the Buddha, consider classics like ‘What the Buddha Taught’ by Walpola Rahula. Closer home, Gayatri Jayaraman’s ‘Anitya’ [https://www.governancenow.com/news/books-ideas/the-wisdom-of-why-you-cant-step-in-the-same-river-twice], nominally about the Four Noble Truths, is a very helpful introduction to the Buddha’s teachings, distilling “life lessons” from them. There are many more wonderful works at the preliminary level. They settle no political scores, rake up no social controversies.

Here, however, that appears to be the main agenda. So much that the Introduction concludes with this:

“On 14 October 1956, B. R. Ambedkar, along with 365,000 of his Mahar followers decided to embrace Buddhism. He dismissed the idea of converting to Islam or Christianity, because of the foreignness attached to them.  … Ambedkar did not want to betray his ‘Indianness’ even when he decided to convert to a different religion, and chose Buddhism after twenty years of contemplation.”

‘Yathabhutam’. See things as they are, the Buddha advised us. For a way out of the suffering, see reality as it is. That, however, is easier said than done. How can we perceive what is ultimately real? With ‘sil’, ‘samadhi’ and ‘panya’. How do we cultivate them; this ‘morality’, ‘meditation’ and ‘wisdom’? By giving up the snare of desire and ignorance – and, let’s not forget – hatred.