Bitten to the bone, by water

Pachgai Khera village is just 20 km from Agra, where tourists sip bottled water as they gaze at the Taj. But the fluoride-laden groundwater that the villagers are forced to drink leaves them crippled and bent. As a child, Deepak (above) dreamt of one day striding tall like actor Amitabh Bachchan. After all, he was taller than many other boys in his class. Today he is 18, aimless, hopeless, done in by the fluoride in the water he and others in his village have drunk all their lives. His four brothers and sister have been spared. “Thank God our sister did not have to suffer and is already married,” he says. “Otherwise, it would have been very difficult.”

The water they drink poisons their bones. Scores of people in Pachgai Khera, a village of some 500 residents, some 20 kilometres from Agra and off National Highway 44, are bent over or have their limbs twisted at the joints. Many have mottled or darkened teeth. Growing children are stunted in their teens, their studies and play halted, their movement and confidence impaired by twisted limbs and dwarfism. Cataract is common. Every other person, even if not deformed, complains of joint aches. It’s the same in the neighbouring villages of Patti Pachgai and Rohta. The culprit: fluorosis, caused by long-term consumption of water with too much fluoride. The permissible limit for fluoride in water is 1 ppm (part per million); the health department of Uttar Pradesh found that fluoride levels in groundwater in the region is 3.5-4.5 ppm. This is caused by fluorspar and fluorite deposits in the soil that dissolve in groundwater.

The only solution is to have safe water piped or transported to this village. “If bringing water to the area is difficult, deep boring should be done. Water obtained from 500 feet deep will be far better than what is obtained from shallow wells,” says Dr BS Yadav, the chief medical officer for Agra district.

Villagers say that, despite representations to the administration, nothing is being done. “No one is listening,” says Chetna Kumari, an accredited social health activist (ASHA) of Pachgai Khera. “And the staff at the health centre hardly ever visit the patients. Now, even the villagers are not bothered about treatment. They say it’s their destiny.” 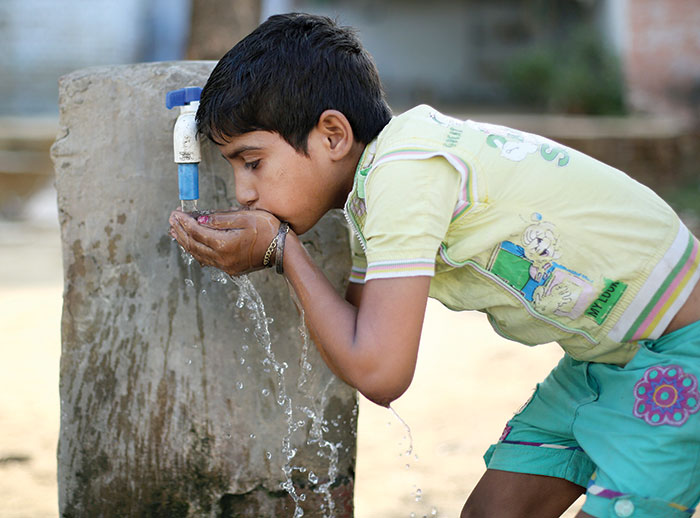 A borewell pump draws ground water, which is stored in a badly maintained tank and then piped to taps from which many villagers draw water. But the ground water is fluoride laden, and it is not treated before supply, villagers end up with fluorosis. 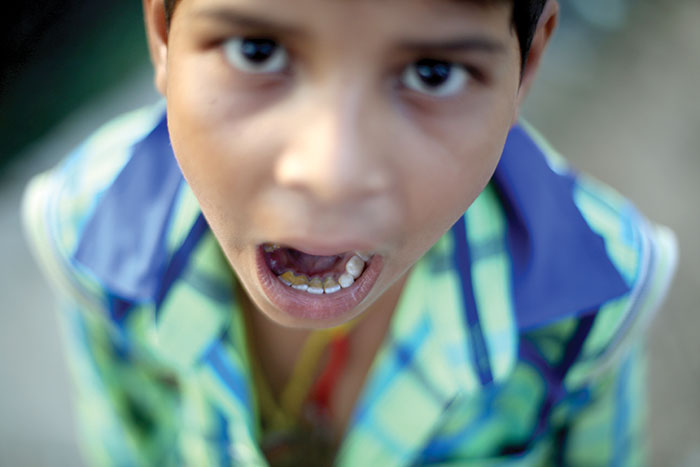 Most children in the village have brittle teeth, stained a dirty yellow from the fluoride deposits. As they grow older, if they continue drinking the same water, their teeth will become mottled and dark. 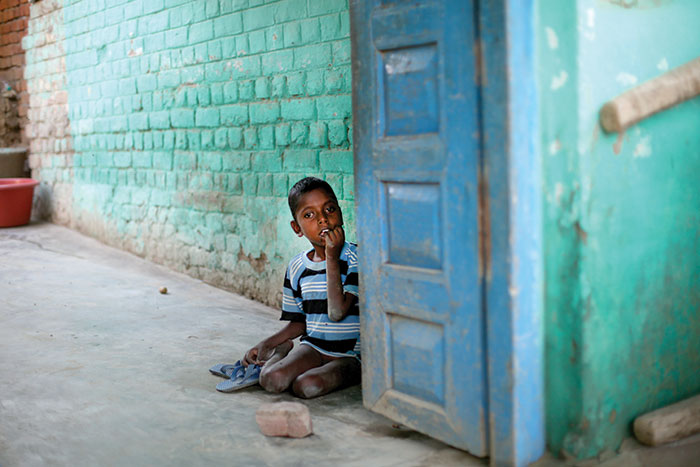 Rohit, who is 12-years-old, goes to school only when someone is able to carry him there. He doesn’t go out to play, and keeps to a corner in his house. His legs are bent, so he cannot join his two sisters and two brothers, who go to school and play in the streets. His mother Sunita, worries about his future – she even looks darkly ahead and wonders if anyone will marry him. She knows his condition is likely to worsen: she has seen it happening to so many others. The 500-foot-deep well is a dream better left undreamt. “Where will I bring the money for that?” The villagers could of course pool money for a common borewell, but then there is the shadow of caste divisions. 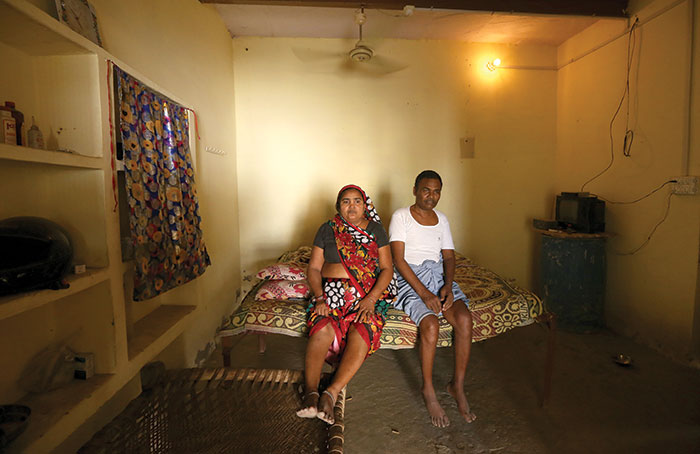 Thaan Singh, 50, and his wife Lata, sold the one bigha land they had for their treatment. With the little money that remained, they bought themselves a reverse osmosis (RO) water purifier, because the doctor said it would help. His wife sells biscuits, paan masala, chips, etc. from a small shop outside their house. And what does Thaan Singh do for a living now? “Bas khatiya todtey hain! (I just sit and squander my time!)” 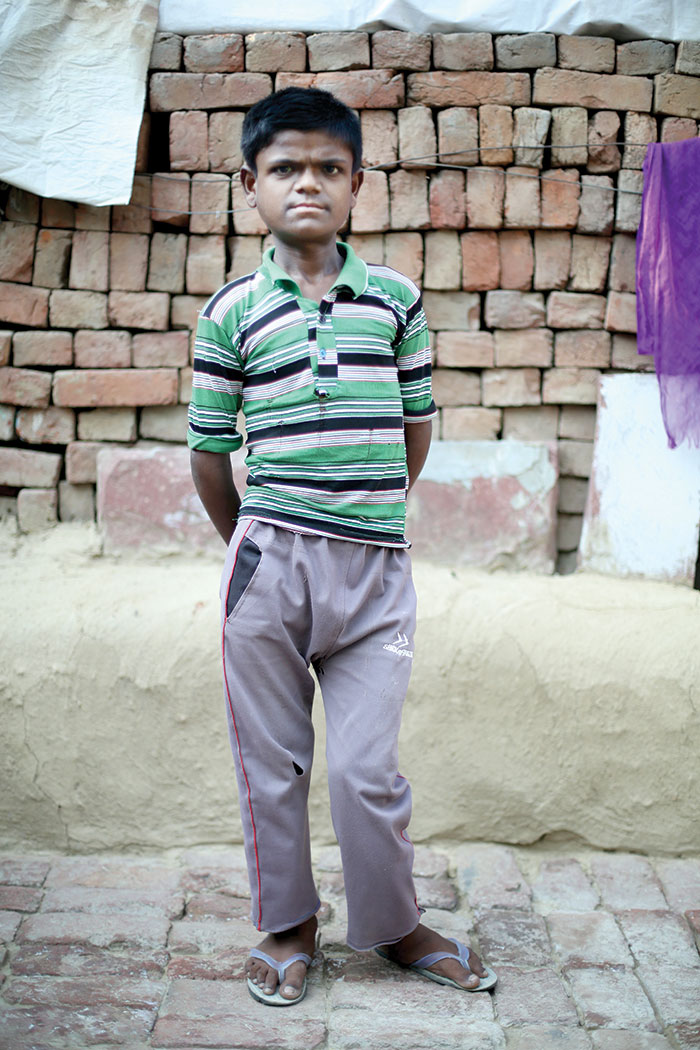 Gurdayal is 16, and gave up studies after class X. When he was about 11, he realised his legs were getting deformed. “It’s all because of this handpump,” he says, pointing to the pump from which his neighbourhood draws drinking water. He even believes the same water is to blame for a stray dog’s bent legs.