A lesson for Indian politicians from an unusual kids' parliament Children queued up to cast their vote

Ili, 14, is out on the street busy canvassing for her 10-year old friend Naila Ayaz, who is a candidate for a unique children’s parliament. Just like seasoned politicians, they make promises and seek votes. It is an amazing sight.

Together, they have been identifying cases of child abuse, drug addiction, hunger and domestic violence prevalent in eastern Uttar Pradesh and hold meetings with their contemporaries and seniors on how to address these for the upcoming session of the children’s parliament and also making it an issue during the parliamentary polls.

Ili, once a rag picker and now a class VIII student, is the outgoing speaker of the children’s parliament that creates less ruckus and chaos than the rajya sabha and the lok sabha. Naila is contesting polls along with 35 others this year.

“I am hopeful that right people will come to power and will take my seat,” said Ili, who is supporting  Naila as her replacement. In this unusual parliament for children in the age group of 5 to 15 years, they discuss problems and make their voices heard by the authorities.

This kids parliament is in Varanasi and has a network of over 16,000 children, who mostly come from families of Muslim saree weavers, small time shopkeepers, boatmen and even rag pickers. Anyone in the age bracket can become a member. This parliament functions round the year.

Election to the parliament is held every two years following somewhat similar model code of conduct as prescribed by the Election Commission of India. The contestants file their nomination and declare assets such as goat, bicycle, earning (if the child is earning) etc. to the seniors who act as election officials. 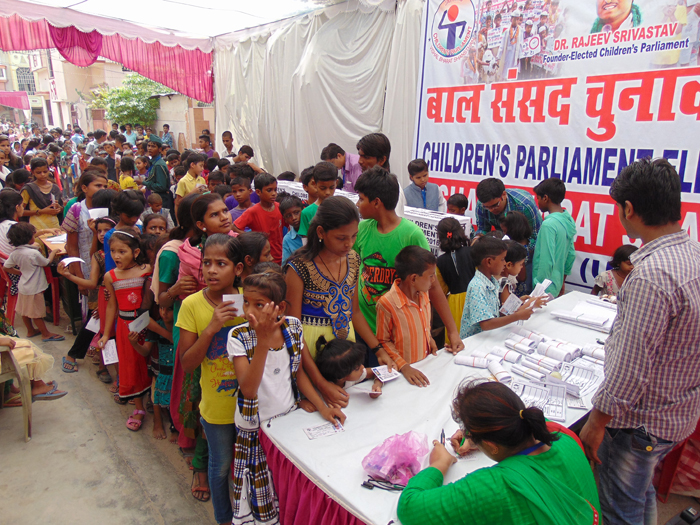 The parliament has instilled confidence in several children and helped them fight their miseries. “My father used to drink almost every day and we could save nothing out of our daily earnings. When the parliament got to know about it, they intervened, I was enrolled in the government school and left rag picking and my father stopped drinking and started leading a normal life after repeated visit by the parliament members,” said Ili.

On June 6 this year, the parliament held its fourth edition of polls. The stage was set. Voters’ list of 16,166 children was prepared. As many as 22 polling booths were installed across Varanasi. Four mobile booths were in the outskirts. Children from neighbouring villages and cities had also come to give their votes.

“First elections were held in 2008 and we were just 1,000 [children] at that time. It was difficult to motivate children to come and join us. However, with time, when we were able to make a presence felt in the region, children from different parts of the city and even outskirts joined our group,” Afreen, former speaker of the parliament and an active member of the group, told Governance Now.

This time, the voter turnout of 98 percent was quite impressive and was the highest ever.

According to Rajiv Srivastava of Vishal Bharat Sansthan, the NGO which founded the parliament, there is no school in our country that makes good leaders. This platform is an effort in this regard.

“Many of our children were small time labourers. Bringing them into the mainstream is very difficult. However, when children are told to help other children, such problems cease to exist. Now, almost all our children are going to school. Some 2,500 to 3,000 help their families earn money along with their studies,” he said.

Srivastava, a professor at Banaras Hindu University, conceived the idea of such a parliament after spending around two decades rehabilitating children and teenagers who worked as rag pickers and were drug abused.

The results will be out on June 10.