Tap water on trains is of dangerously poor quality. A PIL has sought action While train accidents get much attention, there’s something else that should equally be attended to: the railway’s drinking water supply, which could well have caused many more deaths than train accidents.

Indian Railways has been routinely receiving complaints about the quality of water available on trains. In 1994, the Railway Passenger Amenities Committee received many complaints regarding water quality during its visits to various railway zones. There’s a letter sent by the Railway Board to all zonal railways in May 1994 that says: “The quality of water being supplied to the stations and colonies was far from satisfactory and a very large number of samples collected showed unsatisfactory bacteriological results.” In 2012, the Comptroller and Auditor General of India (CAG) pointed out a high sample failure rate and said: “The high rate of unfit water samples was indicative of deficiencies in the remedial measures taken by the railway administration.”

Contaminated water can cause  diseases like diarrhoea, dysentery, amoebiasis, cholera, typhoid, botulism, salmonellosis, hepatitis A and so on. Excluding passengers on suburban trains, about 12 million people travel on trains daily and five million people live in railway colonies. Unfortunately, even passengers who can afford to buy bottled water and railway colony residents who have installed water purifiers at their houses are not safe from being infected from the water. For they all end up using tap water in railway carriages or their homes for washing, bathing or brushing their teeth. And some of the pathogens that cause these diseases can very easily spread from using contaminated water for these purposes. From source to tap, there’s every chance of the water spoiling: borewells are improperly designed, the water treatment process is not properly followed, the storage tanks are not regularly cleaned, the pipes are leaking or corroded.

In 2012-14, Northern Railways launched a drive to improve water supply, but for some reasons it was scuttled. Ultimately, in March 2014, the matter reached the Delhi high court in the form of a public interest litigation from Centre for Public Interest Litigation, a voluntary group. At that time, water quality had deteriorated to such an extent that in one railway division, 100 percent of the samples tested over six months showed contamination. In another, 78 percent were contaminated. In the remaining three divisions, 30-59 percent of the samples were contaminated – but they were all highly contaminated.

Common sense dictates that there should be no contamination in water that humans consume. That is stated clearly enough in IS Code No 10500: water for drinking should be free of contamination. Even if the TCB (total coliform bacteria) count is one in an 100 ml sample, the water is considered unsatisfactory and resampled after the problem of contamination – maybe a leak somewhere – is attended to. If this does not work, the water is tested for E. coli bacteria or other pathogens, and once identified, steps are to be taken to tackle the contamination, after which water is to be retested before supplying. 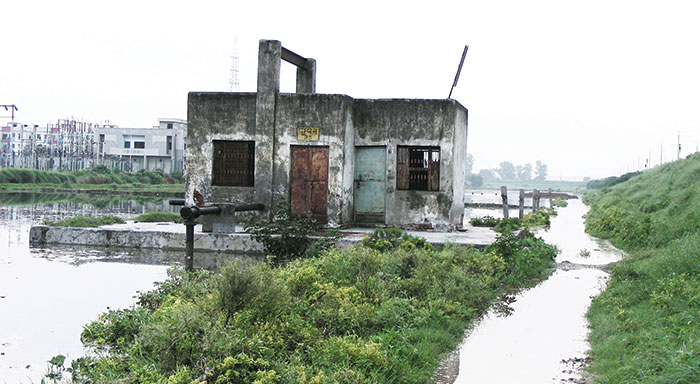 The railway pumphouse near Ghaziabad station, surrounded by sewage water

The most shocking failure is regarding testing and monitoring protocol. The basics are simple: if TCB is present in water, immediately test it for E. coli bacteria (ECB), and if ECB is present, it indicates recent contamination with fecal matter, so water is considered unfit for consumption. If ECB is not present, and TCB is low enough, water is supplied under observation while efforts are made to check the contamination. The flaw in the railway’s water quality monitoring protocols is this: even if tests show TCB is present, water supply is continued without follow-up tests and so on.

There are irregularities at play in the procurement of chlorination plants too. In a letter of April 23, 2013, the Railway Board had instructed all railways to procure ‘programmable logic controller based automatic bacteriological plants’ at all borewells. Since only one company manufactures plants that are so named, there is no scope for competitive bidding. A detailed report was sent to the board in his letter on January 9, 2014, which was addressed to the board member (engineering), pointing out that if the board’s instructions were implemented, it could result in undue advantage to one company. In government procurement, it is a basic tenet that proprietary items should be procured only through special tenders, called ‘single tenders’. But these plants were procured through open tenders.

No action has been taken against the erring officers and contractors responsible for this irregularity involving an estimated Rs 600-800 crore.

Finally in April 2016, the Railway Board issued instructions to all zonal railways to scrap drinking water quality standard and monitoring system with instructions to immediately adopt the national code (IS No 10500). But it still remains unimplemented.
So the PIL said: “We, therefore, direct that the issues and suggestions placed by the writ petitioner shall be placed before the chairman, Railway Board, for consideration who would suggest the manner in which uncontaminated water would be made available to passengers by the Indian Railways. Such report shall be filed within four weeks from today.”

But, the board failed to file affidavit. Instead, on the next hearing on February 19, 2018, the counsel showed a letter which had been written by the Railway Board to Northern Railway. The chief justice was very displeased and rebuked the board. The next hearing is on April 12.