Bihar Polls: Why Nitish is on a shaky ground

Miscalculating Modi’s might led to many more mistakes, and now he lords over moth-eaten political legacy of his own The Kosi region that comprises Purnia, Saharsa, Supaul, Madhepura and Bhagalpur, is literally a forsaken land frequently visited by natural and manmade calamities. Renu’s stories and plots used to be set either in the pre-independence era (1940s) or post-independence (60s and 70s) when the intermediary castes were still learning to assert themselves under the Congress umbrella. The social acrimony of the later decades (80s) had still not quite acquired the nature of massacres that characterised Bihar’s political order then.

But Bihar changed radically over the next two and half decades. The 1990s saw the ascendancy of Lalu Prasad Yadav under the banner of VP Singh’s Janata Dal. He was seen as an effective antidote to the dominance of the oppressive upper castes.

Lalu’s support base comprised social underdogs who carried him through in 1995 and 2000 elections. He became a darling of a section of intelligentsia after arresting BJP leader LK Advani at Samastipur to bring his Rath Yatra to a grinding halt in 1990.

Lalu altered the political grammar of the state, invented new idioms and vocabulary that kept the caste-ridden and fractious Bihari society always on the precipice. The 1990-2000 decade saw a spate of caste killings, each tragedy yielding rich political dividends to Lalu Prasad. The combination of dalits, OBCs and Muslims made for the biggest social chunk and it always tilted in his favour.

With the radical left such as MCC, People’s War and other Naxal groups gaining a toehold in Gaya, Muzaffarpur, Arah and Patna, the radicalisation of society hardened. Upper castes and landlords floated their own private armies such as Ranveer Sena and Kunwar Sena ostensibly to protect their honour and unleashed terror against the hapless. The killings of Bhumihars in Bara of Gaya in 1992 and retaliation against dalits in Bathani Tola in Jehanabad were just a symptom of the malaise that afflicted Bihar then.

In 2005 Nitish Kumar’s emergence as the face of the BJP-JD(U) combine marked a definite deviation from a political order which promoted social acrimony at the expense of people’s welfare and development. In the 15-year regime of Lalu and his wife Rabri Devi, governance was reduced to a farce as the state’s annual plan always fell far short of its target. Nitish Kumar’s experience as an able and no-nonsense administrator earned him laurels even from former prime minister Atal Bihari Vajpayee. Since Kumar belonged to Kurmi caste (an OBC), he won over a considerable section of non-Yadav OBCs also to his fold. 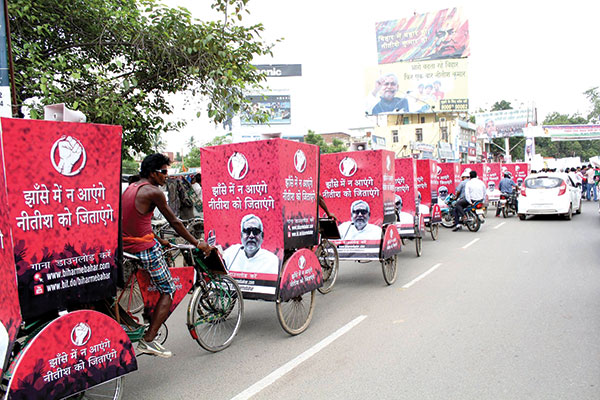 Like Lalu, Nitish Kumar too changed the political grammar and but only to give currency to a political vocabulary that struck a note of conciliation. Unlike Lalu he resurrected the state and institutions to restore people’s confidence in the government. Just after his thumping victory in 2010, Kumar aptly described his agenda as “governance, governance and governance”.

The absenteeism of teachers and doctors from schools and government-run hospitals was curbed. In the words of Shaibal Gupta, a noted scholar on Bihar, Nitish Kumar managed to restore people’s faith in the state. In the process, he forged a potent “coalition of extremes” that combined social elites and underdogs. “This coalition of extremes was a powerful counterbalance to Lalu’s Muslim-Yadav combine,” said Gupta.

Even officials who worked closely with Kumar admit that the first five-year rule of Nitish Kumar saw a manic frenzy to push development agenda. “There was so much to do and so little time,” Nitish Kumar used to say. A group of dedicated IAS officials was chosen and asked to work and monitor development projects round the clock. The state witnessed construction of a record number of bridges and highways in those five years that saw for the first time growth rate surpassing even Gujarat. In terms of social indices, Bihar had shown considerable improvement with literacy rate and primary health care.

A new narrative of optimism and hope was weaved around Bihar which could now tout its own model of development. This prompted even RSS chief Mohan Bhagwat to say that the Bihar turnaround was a greater feat than the success story of Gujarat.

Right up till 2011, the Nitish Kumar story was flawless. He managed to build political capital that was in no way inferior to that of his counterpart in Gujarat and bête noire, Narendra Modi. Kumar did not allow Modi to campaign in Bihar for the 2010 assembly election on the pretext that his presence would consolidate Muslim votes for Lalu Prasad.

Sitting in this impregnable fort, Nitish Kumar seemed well and truly set for a long innings. Only he could breach his fortress. And he did.
But Nitish Kumar did overplay his hand. He stretched his sudden, written-in-a-hurry, I-hate-Modi script to lengths at precisely the time that Modi mania was viralling across the country. And it backfired.

When Nitish took his opposition to Modi to an obsessive level he calculated that a section of the BJP, inimical to Modi’s growing influence, would support him in his new political venture. While so miscalculating, he also overlooked the vulnerability of his Bihar model of development that was essentially funded by the state.

He did not get the backing from Modi-baiters in the BJP and in his second stint as the chief minister, on the back of a thumping electoral victory, he was already seen to be faltering on the development front as well. Mostly because by now people were looking for development-plus. 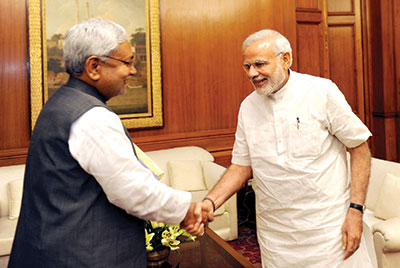 So, was Nitish Kumar gullible in expecting support from Modi-baiters in the BJP? Till 2012, he was given to believe by leaders like LK Advani, Murli Manohar Joshi, Sushma Swaraj and Nitin Gadkari that there was hardly any scope for Modi to burst on the national stage.
In a dinner meeting hosted by Arun Jaitley, the then BJP president Nitin Gadkari famously remarked, “Nitishji, agar aap chahenge tab bhi voh pradhan mantri nahi ban sakte (Nitishji, even if you want Modi will never become the prime minister)”.

Nitish Kumar calculated that internal BJP bickering would exacerbate if Modi were to be declared their prime ministerial candidate. For a time back then it did seem like Nitish Kumar was not far off the mark. In Nitish Kumar’s assessment, the BJP had a limited capacity to grow and would be restricted way below the majority mark in the best case scenario.

His assumptions were based on his deep socialist belief that political mobilisation of the castes would limit the BJP’s growth. He was way off the mark. For all his anti-Modi fulminations, Muslims chose Lalu and his support base, the upper castes, totally deserted him.
This drubbing in the 2014 Lok Sabha polls disoriented Nitish and his politics. One blunder followed another.

He resigned as the chief minister and chose Jitan Ram Manjhi, a mahadalit, as his successor. Manjhi is known for shifting his allegiance according to convenience. While Nitish seemed to be in introspection mode, Manjhi’s liaison with the BJP was an open secret.

Given Manjhi’s long experience as minister in different governments in Bihar, he initiated measures to consolidate his mahadalit support base that essentially formed the core constituency of Nitish Kumar’s coalition of extremes.

Having been deserted by upper castes and mahadalits, Kumar found himself in a precarious position and compounded his blunders by choosing an alliance with Lalu’s RJD in desperation. This flew in the face of his own politics of the last two decades and the massive affirmative mandate he received in 2010 on the Lalu-Jungle-Raj plank.

In essence, Nitish Kumar’s alliance with Lalu was perceived to be a contradiction of what he stood for all these years. When he took over as the chief minister for fourth time after dislodging Manjhi, Kumar was presiding over a moth-eaten political legacy of his own. Though he tried to whip up support by returning his voters to the development narrative of his successful first term, his slogans had lost the ring of honesty of yore.

Lalu’s caste rant (Mandal II, he screamed at the Mahagathbandhan rally) drags Bihar to the 90s and pushes Nitish to the margins of an election that should have been very much his for the taking. Suddenly, the man who turned Bihar around has squandered the narrative of development and optimism he weaved.

As an observer of politics you learn not to write premature epitaphs of politicians. This is not meant to be one. This is just to point out that Nitish should have been in a commanding position, not on shaky ground.

(The article appears as the cover story in September 16-30, 2015 issue. It also also appeared on the FirstPost website)