The author checks recipes displayed along with notes on their protein content.

“Why is the child growing?” is the question that bothers a lot many in the administration. The answer, to be honest, is to be discovered via science, and less via what we call ‘effective administration’. Eventually, it will be the latter that will enforce the former on the field, but the beginnings have to be made in science.

Two such scientific answers we found in the Health Spoken Tutorials of IIT Bombay. One, I have already written about. Which was the skill for effective breastfeeding. And the other that I will be talking about in this article is ‘protein based complementary feeding.’

Protein and its importance are not something new to be highlighted. From celebrities to sportspersons, protein and its importance have been widely talked about. There are innumerable videos on open source and in administration, the infamous ‘7 food groups’ that highlight importance of protein and other nutrients. But a small visit to any Anganwadi Kendra will make one realise that neither the mother nor the Anganwadi Sevika will be able to name the food groups exactly or would be able to tell what they are made of. And they shouldn’t be expected to either, because its theory. And we all know that, theory is boring!

Another simple question to the sevika further simplified things for me. ‘Why should we eat protein?’ And she answered, “Mendu cha vikas” (development of brain). She had no other answer. And I wondered if that is the first thing that she would be concerned with. Whether immunity, building muscles, less hair fall and no wrinkles are things she also connects with protein intake, was also a question.

In addition to all this, to the question ‘What food contains protein?’, the answer is ‘komdi or chicken’ which is inevitably expensive and can’t be afforded by many. Thus, the impossibility of growth.

Thus, with time, the following things about complementary nutrition became clear: The foundational help in the field was very subjective and not based on an action plan, it was boring, the intention/purpose wasn’t clear and protein was thought to be expensive. And we found an answer to almost all these questions in HST.

The one tutorial on ‘importance of protein’ delineates the simple reasons to eat protein. For example: avoiding infections by building immunity. And explains it all with visual aid. So that became our foundational referral material to go back and revise and to make the mother see it herself. It also explains the ‘ganit [math] of protein’: How much protein is there in what food and how much in totality should be eaten by a baby/adult/pregnant mother. And I knew in this very instant that we had to formulate our strategy around this math.

Yaha Mogi Mata is a local tribal goddess, revered across tribes in Maharashtra, Gujarat and in Madhya Pradesh. As an old story goes about here, there was a famine, and the goddess gave one fist of grain to every tribal to solve their hunger. This was a maternal instinct revered in the Satpudas. I also heard about the Baal Bhoj initiative of Odisha, where each mother got one fist of ingredient to an Anganwadi Kendra, to cook a nutritious meal for the children. On these lines, ‘Poshan Pe Charcha’ was launched.

What was the intention of ‘Poshan Pe Charcha’?
Charcha or discussion was to happen around the HST of importance of protein. The intention was that all mothers and sevikas not only understand why protein is important for growth but also learn to calculate its content in their own food first. And this was proposed to be done around a recipe competition, while cooking food. I thoroughly believe that any theoretical discussions or counselling on the field doesn’t work without showing its practical applications simultaneously.

Why calculations?
To celebrate the Ganit of proteins! I took a training of all ICDS supervisors and made them calculate their own protein content first. Amongst 68 supervisors, not one ate more than 22 grams. While HST mandated ‘equivalent to body weight.’ We also indirectly shamed less protein intake, as not being aware of one’s own health status first. This was their first exposure. Calculations would either show them deficiency or sufficiency and then consequently guide them towards the ‘bridge’. And via calculations, it became all the more fun!

In what food was the calculation supposed to be done?
On lines of Baal Bhoj, every mother was asked to get one fist of ingredient to the centre for making a ‘protein yukt recipe’ (recipe consisting of protein). Strict instructions were given to make a complete meal (minus wheat, rice and sugar), consisting of locally available ingredients, with complete protein and also an affordable dish.

What was the award/incentive?
A Poshan Veer Samman. The 12 ICDS projects were told to select one recipe from their respective project and send it in at the district level. They were given complete freedom to choose the most complete recipe. And then out of them, one was chosen as the best and was awarded by the collector.

What churned out from this planning was, now the sevikas were not only making recipes, but also posting their protein content on WhatsApp groups, sending direct printouts to my office. This was unprecedented. At our PoshanMah event, we saw recipes at display, all with the protein content written on a piece of paper placed beside it. The intention to start this project was to inculcate a sense of ‘protein intake’. And we did that by calculating the math, and celebrating it.

For me, this is a beginning of the science of nutrition via administration. It is exact, it is objective, and it doesn’t hover above multiple subjective modules and trainings. It neither dictates a food choice. It tells you, that whatever you eat has ‘x’ gram of protein and since you should eat ‘y’, you should consider your choices. Changing what’s on the plate of someone is a big challenge. And I have never intended that. What was intended was to make them conscious of what should be there. And no the hope is that the change will itself slowly happen. 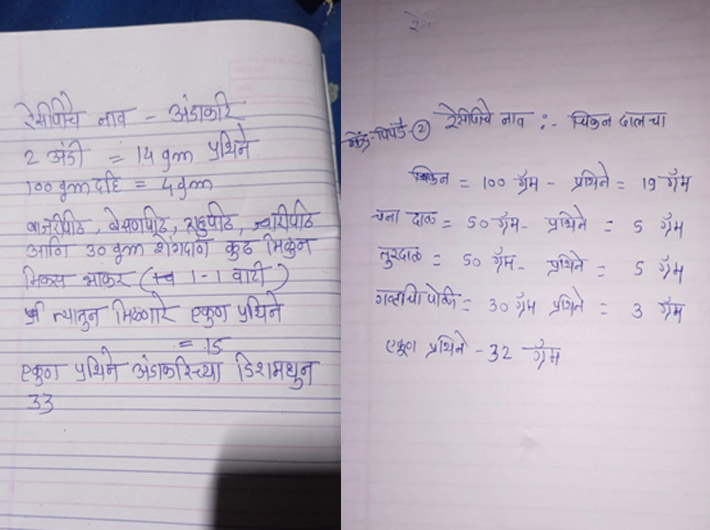 (I would like to express my gratitude to Professor Kannan and Dr. Rupal from the HST team and Dr. Devaji Patil, whose expertise in formulating this hope in the community and its strength to learn and practice, will be something I would always be indebted to.)