...Mufti Mohammad Sayeed became the union minister for civil aviation and tourism in the Rajiv Gandhi government in 1986, and it helped Mehbooba pick a job with a reputed travel company. She never wore headscarf back then, and had an upscale lifestyle.

Mehbooba had a rather low self-esteem, as her siblings were doing well in life – sisters Rubaiya and Mehmooda are doctors and brother Tassaduq was in the US studying film-making (he was to later make his Bollywood debut as cinematographer in Vishal Bharadwaj’s Omkara in 2006). She felt that unlike them, she had not made her parents proud.

So when her father sought her help, Mehbooba was too overwhelmed to even think of the pros and cons of saying yes. “Frankly, I had no idea what it was all about – I just wanted to make Daddy happy,” she had told me soon after winning her first election from Bijbehara in 1996...

This is a small excerpt from our upcoming cover. Mehbooba Mufti is only a few days away from becoming the first woman chief minister of Jammu and Kashmir. There are many myths and stories about Mehbooba, who would soon be in charge of a state where Pakistan has been sending terrorists for nearly three decades. Is she strong enough to take on this challenge? Governance Now gives a close account of life of Mehbooba Mufti in its next issue. 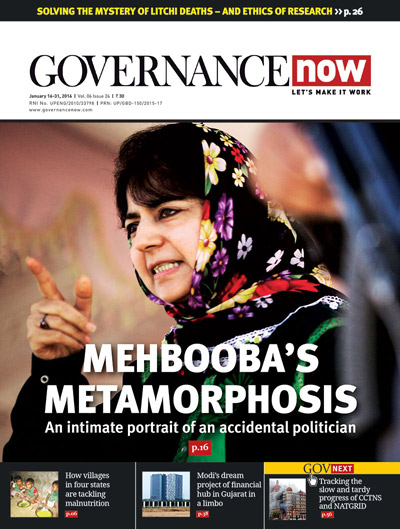