The ongoing campaigning in Delhi assembly elections has three contours. The most visible being ‘in bad taste’, as it creates an uproar and is, at times, censured by the watchdog, Election Commission of India. The other two strands – ‘outright juvenile’ and ‘pseudo-philosophical’ – are no less important, too. It leaves the person on the street bemused and wondering about the political class.

While the BJPs advertisement recalling alleged “hypocrisy” of AAP chief Arvind Kejriwal was felt to be in bad taste by many, some of the comments by the AAP as part of its election campaign are outrightly juvenile. While ‘bad taste’ has come to characterise elections for some time now and is often debated, it is the juvenile type that is usually ignored, as it does not even come up for official reprimand.

As the news bulletin is published by the AAP, the point of comparison is specifically picked to suit its leader. Consider these few feathers in Kejriwal’s cap. Pitching Kejriwal’s brilliance against that of Bedi, the paper clarifies that Kejriwal, a former Indian Revenue Service (IRS) officer cleared the coveted UPSC exam in his first attempt while Bedi a former IPS officer could do it only after failing twice.

Another point of distinction for Kejriwal is the fact that he got his degree from the Indian Institute of Technology (IIT) while that of Bedi comes from a “sarkari” college in Amritsar. What are they contesting for? One might guess they were in race for a badge of school prefect.

Philosophical one: While canvassing in south Delhi, just a week before the elections, AAP volunteers were talking to autorickshaw drivers, apparently their most loyal voters. One of the volunteers said, “Dil ki baat sunoge to Arvindji ko vote doge. ‘Mann ki Baat’ to sab sunte hai. Aap dil ki suno. (Don’t go by Modi’s talk, listen to your heart).” The volunteer was alluding to Modi’s speech titled ‘Mann ki Baat’ on radio every month. However, the innocent AAP volunteers have, in all probability, missed the fact that ‘dil ki baat’ has also been patented by its biggest opponent. Whatever it may be, dil ki or mann ki, the talk comes out to be dumbed down rhetoric.

In a bad taste: Garlanded photo-caricature of Anna Hazare in one of the BJP advertisements was undoubtedly in a bad taste. While everything stated in advertisements cannot be contended as false, but showing a living person dead, even if symbolically, reflects badly on our political class. 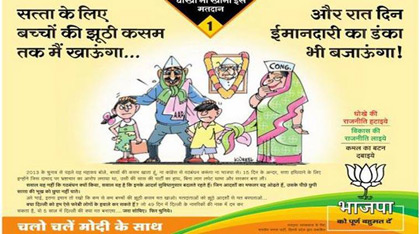 Elections are interesting times, at least for the common man. Amidst the mundane there are few moments of free entertainment. In Delhi metro which has become a new ground for political campaigning, what is philosophical, juvenile and in bad taste, is a part of random discussions among total strangers, sometimes reaching to the level of heated arguments.

While in a lighter vein it can be seen as free entertainment, there is something really important which requires some serious thinking and deep introspection. Certainly, political campaigning is not an altruistic act. Opponents are criticised, their flaws magnified through rhetoric. However, what is perplexing in the current elections is the intellectual bankruptcy of the political class, which is flaunting fancy degrees and vast experiences. They are in no mood to indulge in constructive criticism. Instead, they have happily adopted the easy way of the generally malicious and the dumb.

When all principal contenders have substantial degrees to boast of, political hectoring comes as a shocker for even the most oblivious onlooker of the dance of democracy. There is no doubt that there can be informed debate. That, if at all it happens, will also eliminate the watchdog-moderator.

But they will debate only if they had substantive issues to talk about. Till then, there will only be more mud-slinging, cringe-worthy allusions and asides.