Flooded out of the floodplains The floodplains of the Yamuna, in Delhi, which farmers have been cultivating for many decades (Photos: Arun Kumar)

Moti Pradhan is 73 and he lives in constant fear in a hut of sticks and blue plastic tarp. The Delhi Development Authority (DDA) has bulldozed his farmstead hovel on the floodplains. He hangs in uncertainty. A generations-old cycle has been disrupted. Every year during monsoon, when the Yamuna swells, the water forces hundreds of farmers like Pradhan out of their farmsteads on its floodplains in and around Delhi. Flood-relief teams escort them to shelters along the wide roads near the samadhi sthal of Lal Bahadur Shastri, Vijay Ghat. District authorities provide rations. For three months they remain there till the water recedes. Then return to their farmsteads. An annual cycle. Nine months of cultivating vegetables and grain on the floodplains, three of living by the roadside. But when Pradhan went back after the monsoon to his Malha village, east of Vijay Ghat, he found the house demolished. He thinks he has lost everything.
Scores of villages on the floodplains on both banks of the Yamuna between the old iron bridge near Neeli Chattri Mandir and Okhla barrage face eviction too.
The action is contested by farmers. They are up against multiple authorities. In 2015, the National Green Tribunal (NGT) banned cultivation on the floodplains. The ban came after a 2012 study by The Energy and Resources Institute (TERI) found the presence of heavy metal in the vegetables grown on the floodplains. The NGT has permitted floriculture and silviculture, though. The Yamuna is laden with industrial waste from the capital and its water is poisoning the crops. And the DDA, suddenly laying claim to the land, has started demolishing their farmsteads.
“Where should I go?” asks Pradhan. “Neither the NGT nor the DDA has told us what we should do after giving up farming. I was born in Malha, and my father was a farmer here.”
Like many other farmers on the floodplains, Pradhan says he has tax receipts to prove the legitimacy of their farming. “Our ancestors lived here. The oldest tax receipt I have is from 1926. There are tax receipts from the erstwhile Land and Development Office (LDO). Also of payments to the Delhi Peasant Cooperative Multipurpose Society (DPCS). Since Mughal times, it is understood that khadar land belongs to farmers but we are not supposed to buy or sell land because the river keeps changing course over the years. Other than that, we are bonafide residents of these shifting floodplains. We have Aadhar cards, voter ID cards, ration cards, PAN cards. What more do we need to prove it’s our land.”
According to some estimates, there are more than 300 farmer families living on the floodplain between the old iron bridge and Okhla barrage. Lalvati, 52, says, “The DDA can keep this land but they cannot throw us on the streets like animals. At least give us jobs and places to live. The government is answerable to us too.  We have voted in all elections, but no one stands with us.” She says in 2003-04, the authorities had carried out a major demolition drive, but her farmstead was among those left to stand. “If we are not recognised as residents here, we should have been rehabilitated then. But the DDA did not do that.” 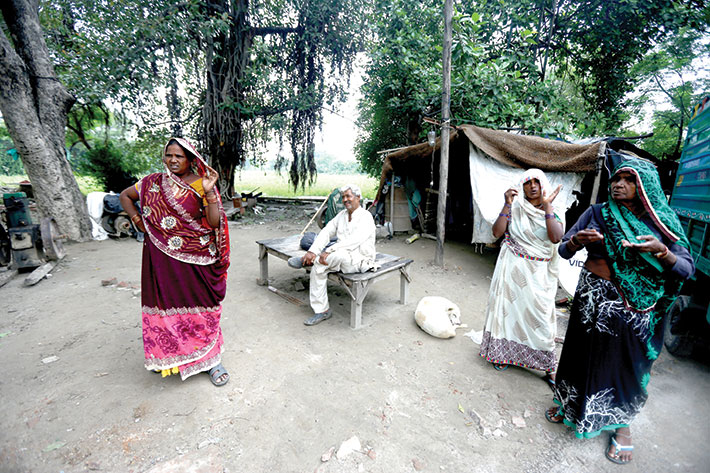 After the DDA razed their homes, farmers and their families live in temporary shelters.

Pradhan’s wife Kalavati says, “Even after the 1975-77 drive, Lt Governor Jagmohan had let us continue to live here. We are the farmers who fed Delhi during the years of the Emergency. Now no one needs us.”
Vichetar Singh, a former floodplains farmer, knows the region and its recent history. “Despite living here for almost 100 years, peasants have never got proper land ownership. Not even cultivation rights. We have been paying taxes since 1926 till as late as 2008. Before independence, peasants were paying taxes to an authority called Delhi Improvement Trust (DIT). The cooperative was formed in 1949 and we paid rent. In 1955, the DDA was created to do away with the LDO and the DIT. The land lease with the co-operative society ended in 1968 and DDA did not extend the contract. But farmers continued to pay taxes and rent till 2008.”
Says Vichetar Singh, “In 1990, claiming ownership, the DDA filed a case against farmers and tried to prove them illegal occupants. But the 1991 ruling by a court in Tiz Hazari was that farmers could not be evicted. Later, the Delhi high court passed an order that DDA could not remove farmers without due process of law, and the peasants should be evicted under Public Premises Act, 1971. DDA, being a statuary body, started public hearing against the farmers in their court at Vikas Bhawan, INA. Most farmers were very poor and belonged to the scheduled castes (SC). They couldn’t afford lawyers. They claim that the lawyer who represented them happened to have been hired earlier by the DDA as one of its prosecutors. They say they were taken for a ride and ended up losing the case. The supreme court has now allowed farmers to stay on till December 31, 2019.”
Land ownership
Advocate Kamlesh Kumar Mishra, who represents the farmers in the supreme court, says the DDA has till now been unable to show how it can claim ownership over the floodplains. He says, “The DDA says that land was transferred to it by the DIT when the latter was dissolved and its authority shifted to the DDA. We also asked where did the DIT get the land from and when? They had no answers. After Independence, the state land agencies acquired land from the Government of India or purchased it from landowners. There is no document which proves that the DIT or the DDA or the government of India has ever acquired this land. The oldest records say DIT was given the land for managment only – and after that the DDA took over. Was ownership transferred? No one knows!”
The land agencies want to acquire about 4,000 acres of the floodplains, from Wazirabad to Okhla, a 22 km stretch along which the Yamuna is highly polluted. In fact, 80 percent of the water pollution in the Yamuna is on this stretch. In the first master plan for the area, the land agencies used light blue to mark the river and its floodplains. No construction was to take place in areas marked light blue. Farmers were allowed to continue living there. But the 1982 master plan marked the areas white, meaning the DDA had no current plans for the area but could plan something there in future. Besides, there was a rehab plan during the Emergency and people were moved to Mongolpuri, Seemapuri, Dakshinpuri and other areas. The first demolition drive took place in 2002-03 after the high court order. 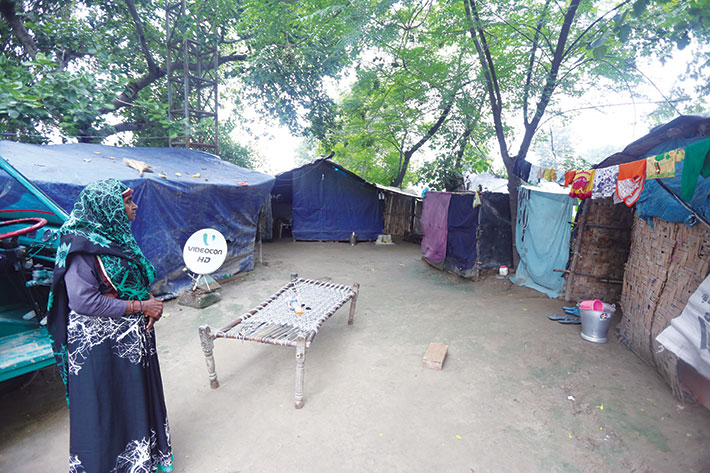 There are more than 200 families which have been affected by the DDA action.

More tangles
According to the Delhi Slum & JJ Relocation and Rehabilitation Policy, 2015, those who have been living in Delhi before January 2015 will not have their homes demolished without providing alternative accommodation, preferably near their current location. Says advocate Mishra, who has filed a petition in the supreme court for proper rehabilitation of farmers, “DDA has never identified farmers’ residences as slum cluster. There are 300 jhuggi clusters on the Yamuna floodplains. These have been around for more than 50 years. Farmers have a right to proper rehabilitation and fair compensation.”
Legal games
Questioning the intention of the land body, Dunu Roy, director of Hazards Centre, a think tank that studies urban displacements among other things, says, “The DDA turned a blind eye when massive encroachment took plain on the floodplains, be it   the Akshardhaam temple, the Commonwealth Games Village, construction of the metro station, and the millennium bus depot. Twenty-two such structures have built on the floodplains, and then they organise a multi-crore Art of Living event. Where was the DDA during that time? Does the DDA file petitions against them? Even now, it has zero interest in cleaning up the river. The fight is all for floodplain land and its upcoming multicrore riverview project.”
Roy says the DDA should be asked if it has clearances from the NGT for such activity, and that the DDA has done nothing to clean up the river. All it has done is act against farmers. Roy finds the NGT order curious. “If taking medicine is harming a person, he will stop taking the medicine instead of letting it kill him. Here, instead of banning pesticides and preventing the pollution of the river water, the tribunal has banned farming. What scientific step has been taken to end the effect of the pesticide on soil? No soil testing has taken places. No one thought of the benefits of a city self-sufficient to grow its own crops.”
Refuting the allegations, DDA spokesperson Savita Bhandari says, “The DDA does not have much choice. The NGT and the high court are closely monitoring the matter. The river is many sorts of holy cow. We are only following the orders and guidelines given by these constitutional bodies.” She maintains that farmers are not authorised to farm on the floodplains.
Similarly, Shripal Singh, principal commissioner, horticulture and landscape department of the DDA, says, “Those are illegal occupants. They have to leave, and DDA is not liable to give rehabilitation. Farming is no longer allowed on the floodplains.”
But the farmers are not willing to give up. Says Shanti Devi, 68, “We belong to this land. Why can’t they understand? How can farming pollute the river? Few people told us that they want to build the commercial park and they will charge ticket for that. First, they sold the river water, and now they will charge the public to see the stinking river and green land created by us. Science has gone mad and the bureaucracy too.”
Says Pinki, 28, who used to labour in the farms on the floodplains, “I’m  a widow. Where will I take my two children? And if they rehabilitate us, will they allow us to stay together? I have a five-year-old daughter. I need to go out and work, and this city is not safe for her. DDA is going to create parks here. Why can’t they hire us for the work and let us stay?”