It has instilleda sense of urgency among stakeholders to resolve bad loans. It should now bring structural change and pave way for a strong banking system The Inception
The problem of surging NPAs on one hand and the issues of indebted companies on the otherwere the primary reason that gave birth to the Insolvency & Bankruptcy Code (IBC). The IBC sought to repeal the archaic laws and amend several legislations such as the Companies Act 2013, the Sick Industrial Companies (Special Provisions) Act, 1985, the Securitisation and Reconstruction of Financial Assets and Enforcement of Security Interest Act, 2002 (SARFAESI Act), the Recovery of Debts due to Banks and Financial Institutions Act (RDDBFI Act), 1993, etc. The IBC lays down a framework which is aimed at providing resolutions to insolvency and bankruptcy in a time-bound and efficient manner. To encapsulate, the IBC truly enforces the concept of ‘creditor in control’ instead of ‘debtor in possession’, and maximises value recovery potential for corporate debtors. This is a paradigm shift in the recovery and resolution process.

The Growing Years
The Positives: The progress of IBC framework so far is encouraging and has resulted in better recovery as compared to the earlier existing mechanisms such as the SARFAESI Act, Debt Recovery Tribunals (DRTs) and Lok Adalats, indicating the greater need of such a framework. Reflecting this, India’s insolvency resolution score and recovery rate improved substantially in the World Bank’s Ease of Doing Business Index, after the introduction of IBC in 2016. 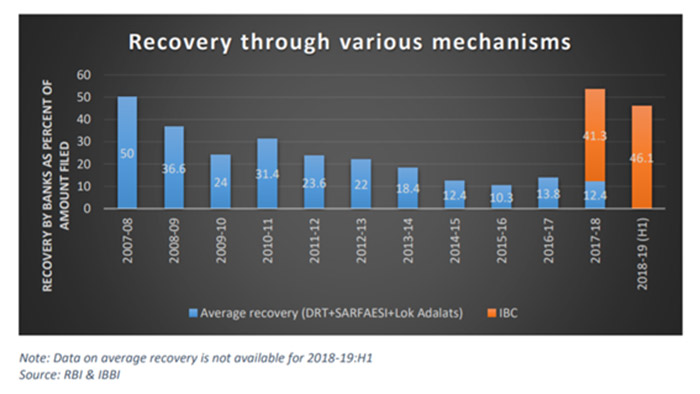 The enactment of IBC, 2016 and the amendment to the Banking Regulation Act, 1949 in 2017 marked a watershed in the evolution of the regime for resolution of financial stress in India, empowering creditors to deal with troubled financial assets in a transparent, time-bound manner. 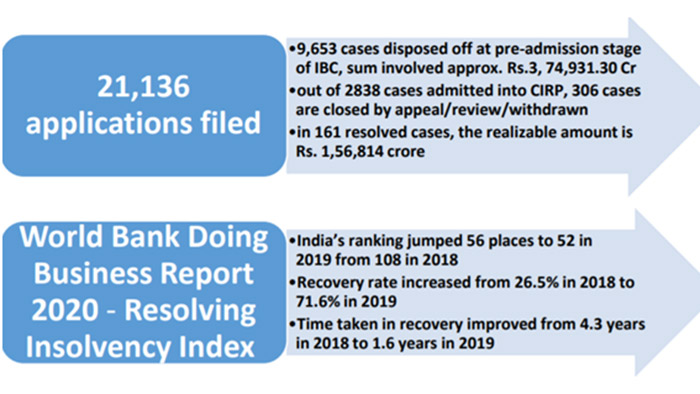 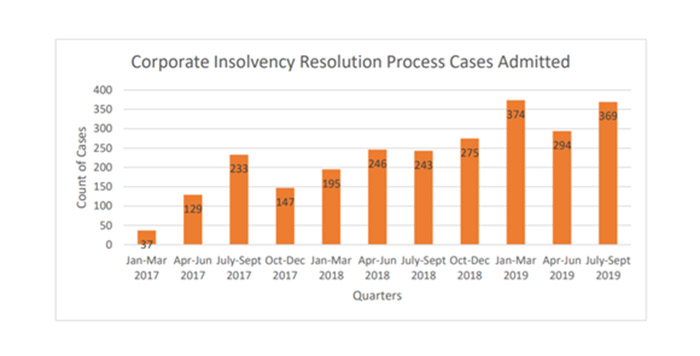 The Challenges:
Liquidation vs. Resolution:
By the end of September 2019, about 56.17% of the CIRPs which were closed ended in liquidation as compared to 14.93% ending with a resolution plan. However, it is important to note that 72.86% of the CIRPs ending in liquidation (427 out of 586) were earlier with BIFR and/ or defunct. The economic value in most of these CDs had already eroded before they were admitted into CIRP. However, the higher numbers might be a cause of concern as the main objective of the law was revival of the defaulting companies. Lack of interest from investors is also a reason for liquidation. The fact that a large number of companies are going for liquidation raises concerns regarding erosion of asset value and job losses. It has also been noticed in recent cases that the investors have been pumping funds from the same lenders. Infusion of fresh investments surely needs to be encouraged. 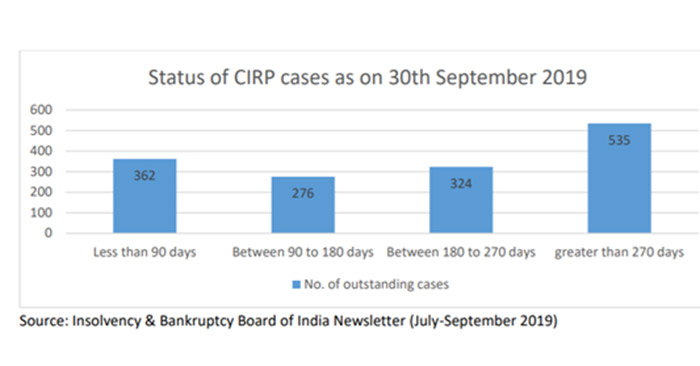 Synchronisation of MCA with IBC:
A practical issue being faced by the insolvency professionals in managing the compliances with ROC is that the website forms have not been updated to accommodate the provisions of IBC. For all filings, the digital signatures of a director or KMP is required for final submission. No such option for an insolvency professional (IRP/RP/ Liquidator) has been provided. This poses a challenge especially in cases where the directors are non-cooperative which then leads to a non-compliance of filing. Since the powers of the board stand suspended, in most cases the board meetings also are not conducted.

Overriding effect of IBC:
Section 238 gives provisions of IBC, an overriding effect over any other inconsistent laws. Even with the clarities available, the investigating agencies and statutory authorities attach the assets of the corporate debtor posing a bottleneck in the process and more litigations.

Having said that, the following is needed to make IBC more robust and beneficial:

Strengthen the judicial framework:
Although the benches of the adjudicating authority have been increased in the recent past, the ground picture reflects a slow movement as petitions at various stages including for liquidation are pending even for a hearing at various benches. There is an urgent need to release the ageing of such applications as well in the public domain.

More power to the insolvency professional:
The interim resolution professional/ resolution professional/ liquidator in the real world is a lone warrior who needs to constantly fight the legal battles, manage the corporate debtors, keep the pace with the regulatory timelines and be answerable to the frequent queries, data requests from the regulators, despite getting no/ irregular payments in most cases. The board needs to go smooth on the insolvency professionals to make the profession more attractive else it may lose its sheen soon.

To summarise, despite the shortcomings, IBC has instilled a sense of urgency among the stakeholders to resolve the bad loans. With a more powerful infrastructure, close watch on the conclusions and frequent fine-tuning of the regulations, the IBC should bring a good structural change and pave way for a strong banking system. The journey has just started and it will get more fine-tuned and clearer as we proceed further.