A microcosm of Hindu civilisation on display Nothing can be as humbling as getting lost in a sea of humanity surging on waves of faith. The Kumbh Mela at Allahabad (now Prayagraj) is an incredible sight. Millions are thronging to the banks of the Sangam – the confluence of the Ganga, Yamuna and mythical Saraswati – to have a dip in ice cold holy waters, hoping to wash away their sins and make life more fulfilling.

Bare-body Naga sadhus, other varieties of monks and mendicants, and the laity – of various genders, castes and stations in life – rush to the ghats as if driven by a pious frenzy. For ages, this grand event of Hinduism has retained a unique fascination for Hindus everywhere. Religion, the driving force behind such an attraction, was the “opium of the masses” for Karl Marx. But that would be missing woods for the trees. The Kumbh essentially represents the spirit of India which is quite diverse and yet unified in its essence.
On January 15, as our small boat moved towards the Sangam much before the break of the dawn, millions of people were preparing to take a holy dip under the foggy sky. Thus began the Shahi Snan (the royal bath), marking the launch of the Kumbh Mela.
In the crowd, no one was identifiable as every individual’s identity tended merge with the collective whole, the humanity. It was a curious display that combined tradition and modernity, the eternal and the ephemeral.
Women took to the river, splashing the water around with gay abandon, without bothering about the presence of Naga sadhus. Gender equity was very much evident in its most pristine form. At first glance, it might have been a scene from a millennium ago, and yet twenty-first century also hovered over, in the form of three drones through which the police control room kept a watch to ensure safety of the millions who congregated here.
This spectacle became all the more awesome as a red sun rose a little north, away from its usual spot, marking its northward journey – Uttarayan. This shift in the celestial configuration is believed to be auspicious for the humanity as it brings longer days and a respite from the cold weather. Mesmerised by the eternal beauty of nature, devotees – rich and poor, young and old, men and women – offer prayers to all gods who, mythology says, descended on earth for the Kumbh – the pot of immortality-granting Amrit (nectar). 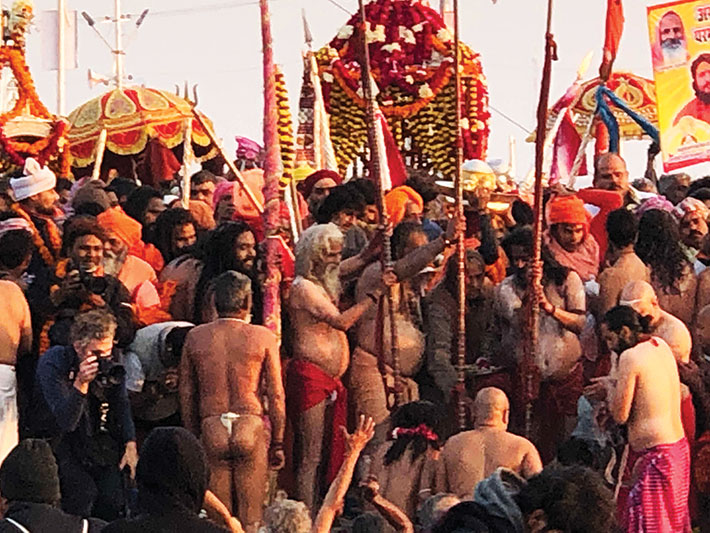 Keeping up with the tradition, the Mela began with the bathing by Naga Sadhus of Mahanirvani Akhara. With ashes pasted on their bodies, these naked sanyasis belong to a spiritual sect that follows the rigorous path of mortification of the body to lift the spirit. Its practices prima facie appear to be quaint but are symbolic of cosmopolitanism of Hinduism that gives wide latitude to people’s behaviour in their spiritual pursuit.
For nearly an hour this Akhara occupied an assigned area of the Sangam where administration remained quite alert to keep the situation under control. Given a mercurial temperament of the adherents of the Naga sect, a slight provocation often causes serious trouble. But the Akhara members left the place quite contented. Then came followers of the Atal Akhara. Interestingly, the other devotees of the Akhara also joined Nagas in performing ablutions in the sacred place. Bathing continued the whole day, with nearly two crore people taking a dip.
The Kumbh has an intricate calendar of its own: approximately every three years, a Kumbh Mela or an Ardh Kumbh Mela is held at one of the four sacred spots: Prayagraj, Haridwar, Nashik and Ujjain – each is on the banks of a sacred river. From time immemorial, devotes from across the country have driven to this place where a drop of Amrit fell after Samudra Manthan (the churning of the ocean). Driven by the religious impulse to partake of that Amrit and become immortal, millions throng in hordes at the Sangam that looks like an incessant stream of a veritable human sea.
The Kumbh predates history and is believed to be a tradition without a beginning. Yet everything associated with it on the ground is ephemeral and transient. In barely three months, the administration puts up the physical infrastructure for the temporary township that hosts the grand event, which accommodates literally an equivalent of Australia’s population. It vanishes in thin air once the Mela gets over. Within six months every trace of that infrastructure will be gone from the river banks.
For old-timers, the Kumbh evokes a tragic memory. Barely nine years after independence, in 1954 the administration failed to manage the crowd flow, leading to a stampede in which close to a thousand devotees lost their lives. More recently, in 2013, nearly two score people died at the railway station and adjoining mela area for the same reason. But the manner in which the Kumbh is being organised this time is unprecedented.
With Yogi Aditynatah, a monk, as the chief minister, the state administration has literally pulled all its sinews to hold the fair in a most impressive manner. The mela area was expanded twice and neatly divided into various sectors to facilitate the pilgrimage. The akaharas (various spiritual orders among Hindus) were allotted their own places near Jhusi. To avoid the grotesque faux pas of the 2010 Kumbh at Haridwar, the sewer lines were laid and connected to the sewage treatment plant (STP) in order to avoid any possibility of soiling the water. Hospitals have been set up all over the area.
There is no doubt that the Kumbh has come as a boon to the people of Allahabad. The state administration has not only widened roads to an unprecedented scale but also removed unauthorised constructions in the city. The well-paved roads and heritage lights put up across the district gives it an entirely new look. In order to facilitate pilgrims, new buses have been introduced in large numbers to commute inside the city. Free food stalls have been set up across the fair to provide free meals to those who return after taking their holy dip at the Sangam. 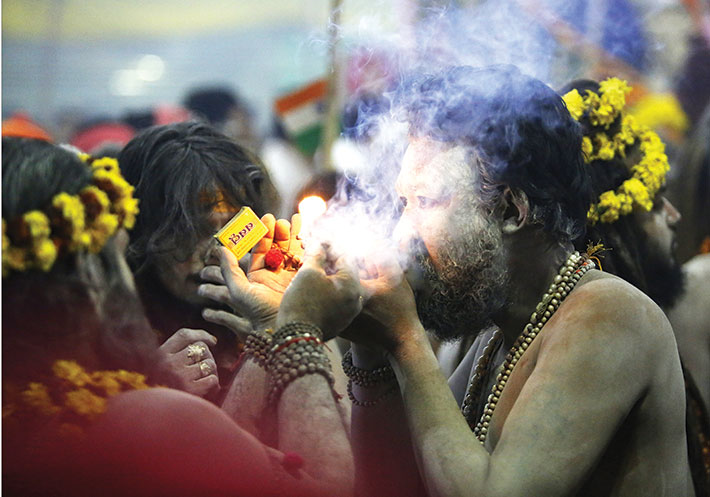 Yogi Aditynatah has an innovative plan to turn the whole city into a pilgrimage spot. To this effect, old but lesser-known shrines have been ‘discovered’ and opened for public. Adjacent to the Sangam ghat, the Akshay vatt – an ancient tree in the nearby fort – was opened as yet another place of pilgrimage. Similarly a well, considered to be symbolic of the mythical Saraswati river, has also been discovered and opened for pilgrimage. Many temples and ashrams around Prayagraj have been done up to divert substantial sections of pilgrims to various spots to ease the flow at Sangam and add entertainment value to their pilgrimage.
For those who can afford it, a tent city has come up across the Sangam in Arail area. One can stay in luxury tents that literally provide five-star facilities with a staggering price tag of Rs 55,000 per day. Of course, these facilities are set up quite away from the Sangam; so that the sacred area does not get constricted for space. The objective is obviously to make the fair a commercially viable opportunity for those who see an economic opportunity in it. There is no doubt that the entire event is a biggest commercial enterprise in the region where trade and commerce flourish with the beginning of the fair.
The Uttar Pradesh government has made massive investments to facilitate this most sacred of Hindu pilgrimages. An area of 3,200 hectares along the banks of Yamuna and Ganga has been taken over, divided in nearly a score of administrative zones where officials are on duty to ensure all arrangements. A parallel township has been created with 1,500 ‘premium’ tents and night shelters, and 1,22,500 toilets. An army of volunteers have been deployed all along the ghats to remove waste and garbage after every bathing.
The place where devotees take the holy dip at the sangam has been effectively fenced and its water level is maintained at four feet or below. Its fence is bookended by nets to safeguard against pilgrims drowning. In essence, the government has pulled all its sinews to ensure a seamless celebration of the Kumbh which hosts the biggest gathering of humans on the earth. Given the complexities involved in it, the Kumbh is no doubt the toughest administrative challenge.
That the Kumbh Mela is the greatest leveller becomes apparent if one looks at the scale of the human participation and heightened spirituality. There is a possibility that a privileged few may have found a better access through official contacts, they do not seem as contented as those who have travelled thousands of miles and walked on foot and took a holy dip to satiate their spiritual quest. It goes to the credit of the herculean efforts by the administration that these ordinary devotees find their trekking to the sacred spot at the confluence better managed than in the past.
The Prayagraj Ardh Kumbh Mela of 2019 will be on till March 4. More and more devotees will arrive here, looking forward to cleanse their sins with a Kumbh dip. Apart from the holy bath, they will have an opportunity to do a darshan of grand Ganga aarti, watch Ram Lila or a ‘laser show’ on the history of the Kumbh. There is an amusement park, planned sangam walks and heritage walks, virtual reality kiosks and, yes, a selfie point.
Soaking in the Kumbh, they will have come face-to-face with a veritable microcosm of real India where faith and religiosity is hardly confined to a straitjacketed notion.
ajay@governancenow.com
(This article appears in the February 15, 2019 edition)