Life without land, land without life People stare at the barren fields. They remember how green this stretch was, what a dense jungle there was, even if it is difficult for a visitor to imagine so. This land once supported its people, providing them enough opportunity to earn from their labour. Today, the stretch lies unused, a constant reminder of all that the people have lost.
This is the land the Odisha government acquired in three village panchayat areas of Jagatsinghpur district for South Korean giant POSCO to build a steel plant. It was to be the biggest foreign direct investment (FDI) in the country, but the proposal was aborted. In the process, people have lost their primary means of livelihood, forcing many to migrate for work.
Tirthankara Das of Gobindpur village says, “My three betel vine yards were dismantled and I was given a compensation of Rs 4.19 lakh in 2013. I invested some money in chit funds like Artha Tatwa and Rose Valley but I lost almost all my investment. The company people and the government had promised me unemployment allowance [till the plant comes up] and a job in the plant. Neither materialised. I am now a daily wage labourer but there is not sufficient work in the village or nearby areas. It’s difficult to feed my family and pay for my son and daughter’s education. I want to resume my betel cultivation. But the government is not allowing it.”
Prabir Das, of the same village, has the same story to share. Santosh Das, who had supported the plant proposal, did not have any cultivation of his own and used to earn his livelihood from daily labour in other people’s fields. “As the betel vineyards were dismantled, I lost my job. I was promised an unemployment allowance of Rs 2,250 per month, which never came.”
Sanjay and Litu, sons of Sukant Jena, who lost his land and betel vines, had to migrate to Tirupati where they work in a company to support their family. Sukant Jena attempted to revive betel vines in his land which the government has acquired. “The tehsildar lodged an FIR against me. They are not doing anything on the land, and yet do not allow us to cultivate.”
Youths like Kalia Das and Kuna Samal from Nuagaon panchayat also have migrated to Bangalore, Chennai and Hyderabad where they do unskilled or semi-skilled labour and send money home.
In Gobindpur, most families have faced similar hardships, as 350 families of this village lost a total of 1,200 betel vine patches in the state’s drive to acquire land. Betel, the leaf consumed as paan, is a lucrative horticulture business. In three months, 70,000 to 80,000 betel leafs are harvested in one field, each leaf selling at Rs 1.5-2. Every season, a farmer can invest Rs 40,000-50,000 and earn up to Rs 1,50,000. Over a year, the profit can be in the range of Rs 3,00,000-4,00,000. The equation served even those without land, as they had opportunity to earn enough from labour. No wonder people here prefer farming over industry. 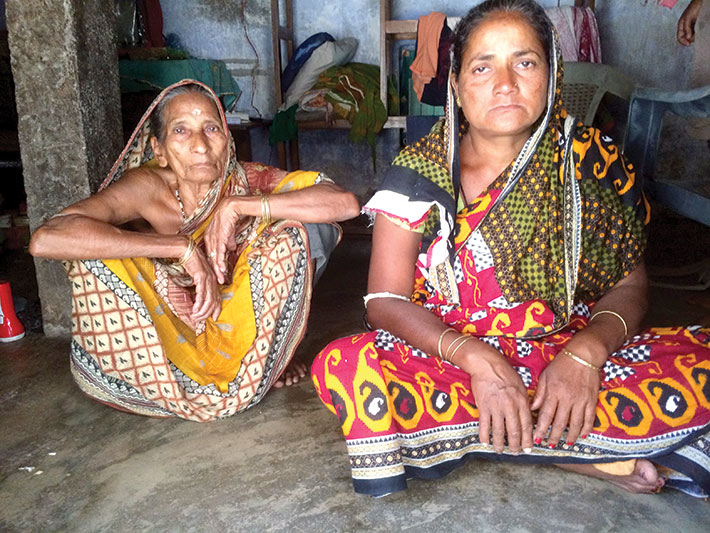 When the land was acquired, the compensation was in the range of Rs 2,00,000 to Rs 4,50,000 – roughly a year’s income. They spent it off in household expenses or invested some in chit funds, many of which ran away with the money. The landless got mere promises.
For six years now, most people are without a regular source of income. No fresh livelihood opportunities are coming up. As Bhramarbar Das, a youth leader from Gobindpur, puts it, “They destroyed our betel vines, they did not give us the monthly unemployment allowance or any job, the compensation money is all spent. How do we live?”
How their travails began
Pohang Steel Company, or POSCO, signed a memorandum of agreement (MoU) with the Odisha government in June 2005. The plan was to build a 12 million tonnes per annum (MTPA) integrated steel plant and a captive port in a large area falling under three village panchayats, Nuagaon, Dhinkia and Gadakujang, of Jagatsinghpur district. The estimated investment was $12 billion (about Rs 52,000 crore in those days). The initial estimate of land requirement was 4,004 acres, but it was later scaled down to 2,700 acres as the proposed plant size reduced to 8 mtpa. The land required included both forest and revenue land (owned by the government, though people used it for cultivation). By 2013 the state government had acquired 2,700 acres, dismantling betel vines and cashew jungles, even as it offered compensation and promised jobs in the steel plant when it would come up.
The project did not progress smoothly. Many people protested land acquisition, the state had to resort to use of force, leading to violence.
Also, a new law, Forest Rights Act of 2006, granted certain rights to forest-dwelling people, putting one more hurdle in the land acquisition process. Another hurdle was delay in getting environmental and other clearances. POSCO decided to call it a day. Thus lands were made barren for a project that is yet to bear fruits.
In September 2018 the state government announced it had decided to allot the same land to JSW Utkal Steel Ltd (JUSL). The new plan will have to negotiate the same hurdles.
People’s struggle
Those who did not want to part with their land came together in 2005, under the banner of POSCO Pratirodh Sangram Samiti (PPSS). The state resorted to allegedly highhanded ways, slapping about 2,500 criminal cases against protesters, and putting 500 people behind bars. Many are out on bail, others keep making rounds of courts to get bail. Protester Tapan Mandal was killed in a bomb blast in 2008, while another blast in 2013 killed Tarun Mandal, Narahari Sahoo and Manas Jena, who too were against the project.
Narahari Sahoo’s son had to quit his studies and start working as a daily wager to support the family. Pramila, widow of Sahoo, says, “We are still waiting for some compensation. My daughter is 25 years old but cannot marry, as I do not have enough money.” Manas Jena’s widow Jharana depends on help from her parents. “I have no source of income. I cannot afford my son’s education. He is now living in his aunt’s home and studying there.”

What people want
The land that gave them the livelihood is lying vacant, and people want to make good use of it since no plant is coming up on it anytime soon. Salila Nayak, the sarpanch of Govindpur village says people had held a palli sabha, or village meeting, in February this year and passed a resolution demanding return of land to them, and withdrawal of police cases against protesters.
The six years since full land acquisition have not diluted their resolve. If anything, they are surer of what they want. Manorama Khatua, a PPSS leader from Dhinkia, says, “We will not allow any industry to come up here – no matter what. We want our land back.”
Prasant Barik of Nuagaon village adds, “We are very worried with the prospect of JSW starting a plant here. We have seen enough of blood and deaths. It’s unfortunate that the government does not realise its folly over last 10 years. People can give their lives, but will not allow establish a plant here.”
A Nuagaon villager, who does not wish to be named given the strong sentiments about this matter, prefers a practical solution. “If a new company comes up, it is better as we have given up our land and we need employment. But it is true that the villages were divided after the project was proposed. Earlier people lived in peace and amity with each other. I won’t mind if no industry comes here either. We do not want another bloody struggle in the area.”
feedback@governancenow.com
(This article appears in the May 31, 2019 edition)