Nutrition mission or a mission for measurement of malnutrition?

The crisis will persist as long as policymakers continue to view nutrition and food security in terms of subsistence and survival, of filling the stomach, and not in terms of good health or wellness Household counselling about sanitation and the inter-generational cycle of malnutrition in a village in Devadurga block of Raichur district, Karnataka (Photo: Karnataka Nutrition Mission) 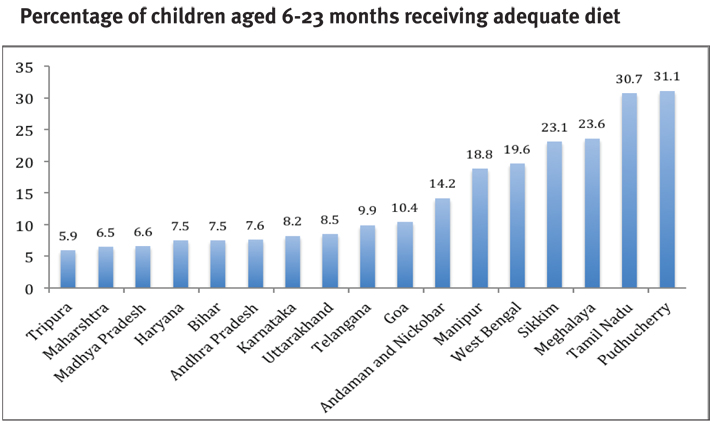 Behaviour change and dietary diversification by providing information and awareness at the community/family level is something that has repeatedly been recommended – right from the Bhore committee report of 1946 and the first five-year plan onwards. However, this very powerful intervention continues to elude a strategy and programme even after six decades. Evidence from the Karnataka Multi Sectoral Nutrition Pilot Projects establishes that just behaviour change over a period of one year can bring about 3-4% decrease in underweight and wasting of children, improvement of adolescent girls’ BMI, pregnancy weight gain, and reduction in low birth weight. Unfortunately, the NNM has not marked this as a priority objective.
The inter-generational aspect, too, linking underweight and undernourished adolescent girls with underweight, malnourished mothers, who give birth to either low birth weight or malnourished babies, is also completely ignored. The adolescent girl is the critical link in the inter-generational, lifecycle and holds the key to the nutritional health of the next generation. The midday meal programme is the only nutrition programme for the school-going girl child between the age of 6 to 14 years, but it is a substitute meal worth about Rs 7 per day, not an additionality to bridge the calorie-protein-micronutrient deficit. The Sabala programme was introduced in 200 districts in 2011, but its coverage and nutritional component is weak. Most importantly, there is no mechanism at the village level that ensures that interventions for the nutritional needs of the girl child, the adolescent girl and the expectant mother operate in continuity and simultaneously – the only strategy that can break the inter-generational cycle in the shortest time.
Without having identified and addressed the root causes of undernutrition and micronutrient deficiencies of more than 50% of the population, it is no surprise that our Global Hunger Index ranking has dropped from 97 to 100 in 2017, or that India’s nutritional situation is termed as ‘serious’ both in the Global Nutrition Report as well as Global Hunger Index. As long as nutrition governance and stakeholders continue to view nutrition and food security in terms of subsistence and survival, of filling the stomach, and not in terms of good health or wellness, the situation will persist. Nutrition security is a subject that has not even entered into the realm of public debate.
Addressing the causes of India’s malnutrition, as described above are doable and have been done in the pilot projects in the two most backward blocks of Devadurga in Raichur district and Chincholli in Gulbarga district. The nutritional status of children, adolescent girls and women has improved dramatically through behaviour change and additional dietary supplementation, strategic and practical convergence and real time monitoring. To know more about it, take a look at www.karnutmission.org.
Just before announcing the NNM, the ministry of women and child development took a rather disturbing decision. On November 23, it informed the states that it was discontinuing several administrative costs of the ICDS from December 1, 2017, and reducing the central share for staff salary to 25% from the existing 60%. This is bound to cause serious financial dislocation in the states, just as the financial year is ending. Not a very encouraging start for the NNM – or whatever is left of it.
Rao, IAS (Retd), is advisor, Karnataka Comprehensive Nutrition Mission. Views are personal.
(The article appears in January 31, 2018 edition)