The Integrated Child Development Services (ICDS) norms for THR (take home rations) are constant throughout the complementary feeding age group (6-24 months) and beyond, despite variations in requirements of both macro and micro nutrients, a pan India study has found.

The caloric and protein norms for THR are more than the requirements for complementary foods to be consumed by breast-fed children till 11 months of age, according to the study titled ‘Review of Take Home Rations under the Integrated Child Development Services in India’ conducted by Public Health Foundation of India and United Nations World Food Programme has found that

Observing that the amount of energy provided by RTE or RTC food products should be less than the amounts needed by a breastfed child from complementary foods and that it is also important as energy intake among young children is often limited because of gastric capacity the study cautions that the high caloric value THRs could potentially displace children between 6-23 months of age from breast milk, limit their dietary diversity and interfere with consumption of local foods and promote obesity. In order to support breastfeeding it recommends dietary diversity and inclusion of good quality local foods in a child’s diet and to avoid excess energy consumption.

The study on THR distribution to children in the age group of 6-36 months and to pregnant and lactating women through the anganwadi network across the country under the government’s ICDS was conducted over a three-month period. A total of 87 different types of THR were mapped. In total 41 of the 55 RTC/RTE product categories are distributed as THR across the country to young children. Out of the 41 products for children data was not available for three products on iron content while 18 products had iron content as per the ICDS specifications .THRs distributed as products were categorized into ready- to cook (RTC) and ready- to- eat (RTE) with each further divided into fortified or non-fortified rations.

The study found that RTC and RTE products distributed to pregnant and/or lactating women did not confirm alignments to ICDS norms for energy, protein and micronutrients was less than desirable. A number of micronutrients such as vitamins B-6, B12 and D which are recommended by the WHO/FAO RDA levels for children in this age group are missing from the ICDS guidelines on micronutrient fortification. The guidelines on fortification recommend that the THRs should provide 50% RDA per beneficiary per day for iron, vitamin A, calcium, thiamine, riboflavin, niacin, vitamin C and free folic acid. For 41 of the total 55 RTC/RTE product categories that are distributed as THR across the country to young children, data was not available for three products on iron content while 18 products had iron content as per the ICDS specifications.

The findings compare THR norms for the ICDS rations to the global guidance on Infant and Young Child Feeding as well as the Recommended Dietary Allowances for the given age group in the accompanying table.

As many as 38 of the 41 products in the children’s THR provide at least 0.8 kcal/gm of energy, while data was not available for the remaining three. The average carbohydrates content was about 64.5 percent.

Thirty-one products were found compliant to the global guidelines on protein content with an average of 12% protein, six products did not comply and data was not available for four products. Haryana had the lowest protein content in panjiri at 7%.

Only 19 of the 41 RTC/RTE products for children were compliant to the global norms for energy contribution from fats. Eleven did not comply and data for 11 products was not available. The average fat content was about 22.5 percent with the highest noted in milk powder (48.5 percent) in the THR in Meghalaya.

Sugar content was found at about 23 percent with the highest in panjiri (33 percent) distributed in Delhi and the lowest in energy-dense daliya distributed in Uttar Pradesh. Twenty-four of the 41 products distributed to young children did not comply with global guidance on the energy contribution from sugar. Three products did not contain any sugar and data for 14 products was not available.

Eleven of the 41 products also had milk/milk products as a component which are distributed in the seven states of Karnataka, Madhya Pradesh, Manipur, Nagaland, Andhra Pradesh, Arunachal Pradesh and Uttar Pradesh.

The findings recommend that the government must issue guidelines on product composition which include nutritional value of THR beyond kcal and protein content, broad THR composition, updated micronutrient fortification guidelines aligned with RDA ICMR 2010,reduce sugar content to less than 10% of overall energy, enhance fat content and encourage addition of milk powders to improve protein content. 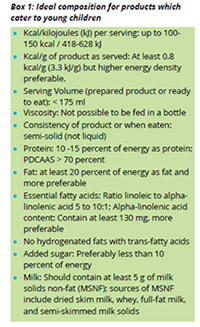 With limited details available on quality control and quality assurance mechanisms and only from 12 states including Andhra Pradesh, Arunachal Pradesh, Assam, Jharkhand, Kerala, Meghalaya, Manipur, Madhya Pradesh, Odisha, Rajasthan, Sikkim and Uttar Pradesh, the study finds that there are no clear protocols on corrective measures to be taken in case a product is found not to conform to quality standards. It recommends mandatory testing of pre-identified parameters, institutionalisation of independent quality assurance and quality check mechanisms within ICDS systems and timely reporting of quality checks to producer.

Further, the study also found that despite requirements, labeling lacks information on instruction for use, reconstitution, and optimal utilization of the product and daily serve size. “Though the majority of these products are meant for infants and young children most do not meet the required prescription of global labeling norms that mandates the compliance to international code of marketing of Breast Milk (BM) substitutes and WHA resolution (WHO 1981), printing info on IYCF practices, use of per day ration packets or graded utensils for requisite consumption.