Rise of the robots

With the Karnataka elections, democracy enters a new age in which the voter stands reduced to a robot It could have been the office of a start-up; only the posters on the walls made it clear that this was what has come to be known as ‘party war room’ – the hub where political strategists and party cadres come together to chart out their work. Their work is to help the party and its candidates grab more and more votes.

War rooms were laid out all over Karnataka, in starred hotels and plush houses. The BJP top brass was meeting at a home in the upscale locality of Malleshwaram north-west Bengaluru, those of the ruling Congress at a similar venue on Cunningham Road. A motley crew of young professionals – techies and MBA types, at home with gadgets and jargon – pored over Excel sheets and PowerPoints on their laptops and large-size mobile phones. In another corner of the hall, a bunch of veterans discussed voter feedback gathered in the old-fashioned way of actually interacting with people. Were they nostalgic about past battles, and trying to recall the lessons they had learnt in dusty rallies? Were they trying to come to terms with the new age of flamboyant, technology and data-driven election campaign?

At any rate, the marriage of politics and big data has finally happened, not surprisingly in the tech hub of India, Bengaluru. There have been elections before in which cyber technology – especially social media – played a major role, as in the 2014 Lok Sabha elections. But, the first election in which the whole of the hi-tech armoury was deployed is the one that just ended – the Karnataka assembly elections.

This was also the first elections in India after the Cambridge Analytica fracas hit the headlines. This London-based company (which calls itself ‘political consultancy’ and has a tagline that says ‘Data drives all that we do’) is accused to have illegally harnessed personal data from Facebook, collected through the bait of a game, and used it for political purposes. To simplify, if a party (or a candidate) has a good idea of the political views and likes-dislikes of as many voters as possible, it can use this information to fine-tune its own outreach to voters and influence their votes. Though the internet and social media penetration in India is yet to achieve a critical mass, it is getting there faster and faster, and a new ploy like this can indeed decide the outcome when elections are won and lost over a margin of a few thousand votes.

While l’affaire Cambridge Analytica rang alarm bells for the law-enforcement agencies worldwide, it seems to have only inspired new-age political consultants in India. They are also helped by the alleged loopholes in data and privacy laws here.

If war rooms look like start-up offices, that is no coincidence; many are indeed staffed and run by tech start-ups from Bengaluru, Delhi and Pune. Their techies and marketing experts have developed tricks to get whatever relevant data that can be gathered about as many voters as possible – and also apps to track any changes in voters’ thinking as the voting day comes closer. Voters’ phone numbers and email IDs too have been collected, not always through legal routes. There are agencies available for hire that will do all the micro-planning for the candidate – for the right price.

Which brings us to the second aspect of the twin attack on the gullible voter: funds. This was arguably also the costliest election of its kind in India so far.

Money and muscle power are now replaced by money and data power – at least in our own Silicon Valley as yet. In place of social engineering, it is time for social-media engineering. The Karnataka election marks a complete transformation of Indian politics. It is totally unrecognisable to those who watched candidates slogging day and night, addressing rallies and going to as many homes as possible, folding their hands before voters and seeking their blessings.

If you have any doubt, consider this vignette: a candidate walks into the war room of a national party and demands Rs 30 crore to counter his main rival’s aggressive campaign. There is no reason to believe his demand was not met, and that would mean the particular assembly constituency would have witnessed a spending upward of Rs 60 crore by any conservative estimate. 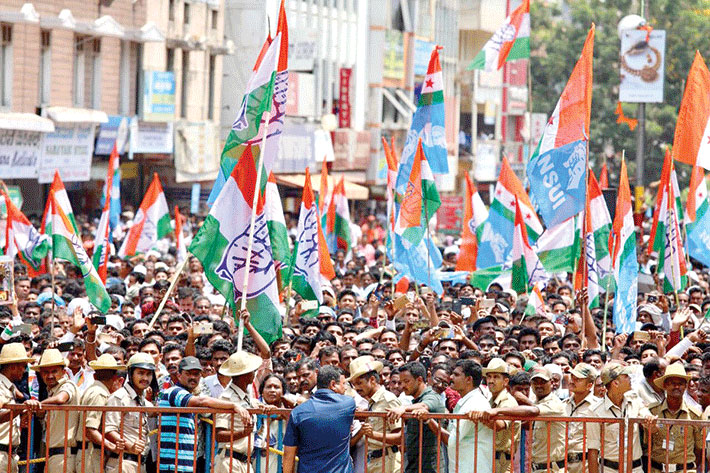 
Here is another vignette: a candidate of a national party is believed to have told one of his sympathisers that he had earmarked Rs 50 crore only for his assembly election. In effect, he was promising to distribute nearly Rs 7,000-10,000 to each voter.

Karnataka was stinking with cash in this no-holds-barred battle. So much so that when ATMs in many parts of the country went dry for many days in March, it was blamed on this election. Ironically, the state’s most critical political happening was mired in slush cash. Digital money was missing.

Who is to be blamed? One can hear BJP leaders protesting as vehemently against the Congress as the Congress against the BJP. HD Deve Gowda and his son HD Kumaraswamy who lead another important regional outfit, Janata Dal (Secular), were aiming to play the kingmaker in the eventuality of a hung verdict, and are not above blame either. 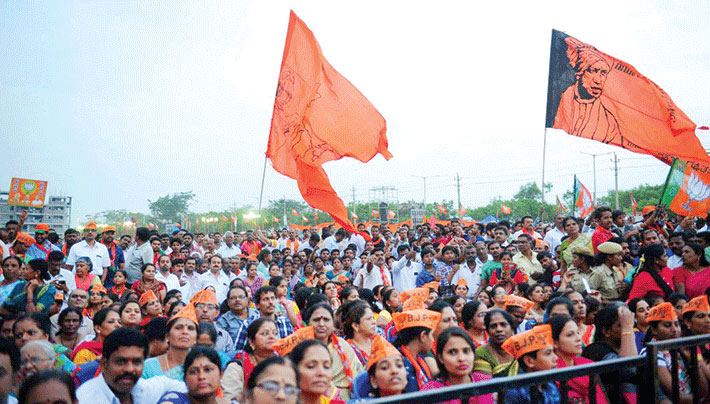 By the time you read this, the result would be out. Irrespective of who wins the Karnataka elections, it marks the beginning of a new trend in politics – the tendency to treat voters like robots who respond to a software program through remote control. Voters, in this scheme of things, are not supposed to be intelligent enough to decide who to vote for. They are reduced to puppets on strings, and armed with all the relevant information about him or her, geeks were out to manipulate their behaviour. In any case, voters’ intelligence may not be a match for artificial intelligence backed by the razzmatazz of the money power. Pushed out of the agenda were all the issues that mattered to the citizens (read the report in the following pages).

As you are now analysing results for caste and regions trends, these code writers and brand consultants are right now analysing which trick worked and which needs to be tweaked. For they are preparing for the big gamble next year.

Democracy in its content may remain intact but it will be flagrantly violated in spirit. That is the essence of the Karnataka election.