If I have to describe this book in one line, I would say it’s a 444 pages-long-trek where you get to listen to people with a literary bent of mind, soak up the Himalayan solitude and get a glimpse of the stony life up the hill. The book –Himalaya– an anthology edited by two mountain dwellers, Ruskin Bond and Namita Gokhale, is a Himalayan journey between the hardbound covers. 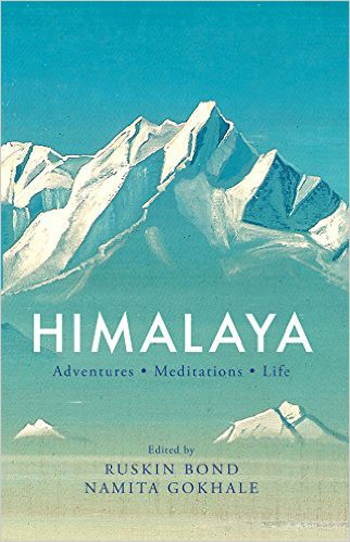 The book has 44 odd essays which are broadly grouped in three sections: Adventure, Meditation and Life. Eminent writers, travelers, naturalists, leaders and prisoners including Amitav Ghosh, Jim Corbett, Dom Moraes, Mark Twain and Heinrich Harrer appear for the reader to narrate their wanderings and experiences in the great mountain range.

Editors have deliberately chosen people as varied as from Jahangir to Jawaharlal Nehru, from Fa-Hien to Frank Smithy, from Rahul Sanskriyayan to Bil Atiken, all describing the Himalayas in their own way.

What is remarkable is to note that these writings have always stayed, always existed. But these were lying scattered. The wide range compiled in the book would have otherwise cost us a lifetime of reading.

Editors have compiled the enduring and insightful records in a chronological order starting from 399 CE (the times of Chinese Buddhist monk Fa-Hien) to as lately as 1970s. In the first section, there are riveting tales about hide outs, wars, attempts of earlier ascents and descents and stories of hunts. In the second section, the reader gets a different view of the Himalayas. Here, the mountains are about poetry and contemplation. We get to read writings of mystics, poets and seekers finding solace and soulfulness. Here we find stories where the great ranges have altered the souls of even the non-believers and non-seekers. The third and the last section –life- is more about the natives wrestling a living from the rough and calcified soil.

From reading a few chapters of the book, it is apparent that although mountains are impersonal, but different people have perceived the ranges differently. Himalayas are beyond a cold, rocky terrain. For some people, the ranges turned into bloodied battle grounds, for some it became the safest hide out. For some the ranges turned out to be a compassionate companion and a spiritual centre. For some, Himalayas posed an unprecedented challenge. Sir Edmund Hillary, the first man to surmount the Everest (the highest peak) puts it like this, “It is not the mountain we conquer but ourselves.”

The two and a half pages preface by Mr Bond, in the simplest elements, highlights the natural disasters the mountain ranges have faced recently. “You can climb a mountain but you can’t possess it. It is simply there, serene and impervious to your love or hate, and it will be there long you and I are gone. But sometimes they shift, as we saw last year when an earthquake ran through Nepal, flattening dwellings and causing massive avalanches in the higher reaches of Himalaya… It has happened before; it will happen again.”

Through this book, I traveled through time. I felt the complexities and vastness of Himalayan life, I sometimes fought the war, I ascended and descended several times through the difficult terrain, I lived the life of the prisoners and sometimes that of an ancient traveler, I also conquered the highest peak, I spent several years in the safest hide out. I lived and I meditated. However, despite all this, Himalayas remained an enigma for me.