How Chikhli village in Gujarat gets new looks under SAGY, awaits more development The muddy, narrow lanes of two slums including Nadi Mohalla were renovated and covered with paver blocks.

Not many people would have heard of Chikhli village panchayat of Navsari district in south Gujarat. But it is emerging as the template of village development, to be replicated in the prime minister’s constituency too.

The SAGY guidelines provide one-year timeline for completion of work, but Patil completed the task in just three months: between November and February. Modi, it is said, appreciated the work carried out in Chikhli when Patil made a PowerPoint presentation before him. At present Patil is overseeing similar development work in Jayapur, the village adopted by the PM under SAGY. Also, Patil has been made in charge of Modi’s constituency, Varanasi.

The PM is not the only one to admire Chikhli ‘adarsh gram’; local villagers too acknowledge Patil’s work. This correspondent visited Chikhli in the first week of August. Here is a brief backgrounder on Chikhli. It is a village panchayat and a tehsil in the enterprising and affluent south Gujarat. The panchayat has over 1,700 families, with a population of 7,000. [Under SAGY, the population of the model village should be under 5,000, but this condition was relaxed for Chikhli.] It is located on the busy Ahmedabad-Mumbai national highway, with a river called Kaveri passing through the village. Chikhli is a commercial centre for the 67 villages of the tehsil.

A significant chunk of the population belongs to scheduled castes and scheduled tribes. As many as 131 families here have been categorised as living below poverty line. Several of them live in two slum areas, Nadi Mohalla and Kasba, close to the riverfront.

“A gram sabha was organised in presence of local administration to discuss possible development works required in the village. Later I also sat with village farmers and teachers. In total works worth '19 crore were identified,” says Patil. The development work started with street cleaning. In the initial days, recall villagers, Patil spent three days a week in Chikhli. Accompanied by party workers and some village volunteers, he himself took broom and started the cleanliness drive. The two most important works Patil undertook for the community were the setting up of a sanitation facility for the poor, and paver-block flooring and road reconstruction. 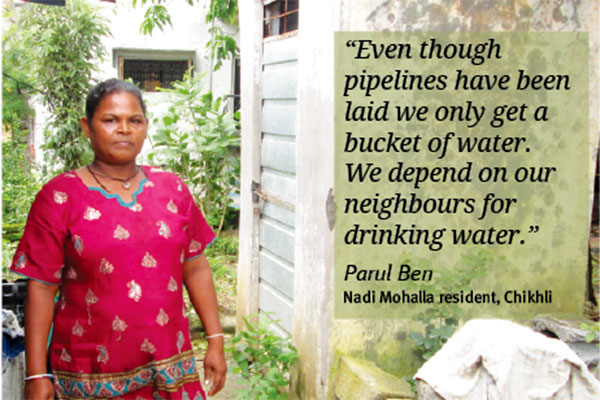 For Sumi Ben, 50, Parul Ben, 40, and several other village women, life has become better after construction of toilet in their houses. They do not have to go out in the open for defecation. As many as 380 toilets were built in Chikhli, many of them in the two slums. The work was funded by Krsna Leelaa Foundation, a Mumbai-based trust. “Last year the foundation had pledged to build 10,000 toilets in Navsari. Patil connected the NGO to the local administration,” says a villager.

The narrow, muddy lanes in the slums became worse during the monsoon. When lane renovation started, slum dwellers were initially reluctant. “It took time to convince the dwellers to cede spaces they occupied in front of their houses and lay out paver blocks. Once they understood the whole idea of SAGY they cooperated with us,” says Raju Soni, a BJP member and village volunteer for the SAGY. “Three feet lanes were widened into eight feet lanes,” says Patil. Besides, a two km stretch of an 11-km road was rebuilt by Patil, says Jyoti Ben, head, Chikhli gram panchayat.

In the past, the village didn’t have a protection wall on the river bank and hence soil erosion was a regular affair during the monsoons. A huge Shiva statue built six years ago by an NRI on the river bank had lost its colour and texture. The MP built a protection wall all along the riverbank and renovated a temple and the Shiva idol. In addition, an open ground along the riverfront was covered with pink, grey and yellow paver blocks. The riverfront and village streets were also illuminated by solar lights.

Other works undertaken by Patil include renovation of road circles in a public-private partnership, putting waste collection bins around the village, procurement of a diagnosis machine for the Rotary Eye Hospital (in the nearby Navsari), a library in the village panchayat office, gas-based cremation at the village crematorium, a modern aganwadi centre and a bus stop.

While villagers appreciate Patil’s work, they feel more could have been done. Parul Ben, a mother of three, who works as a domestic worker and lives in Nadi Mohalla, says water supply is inadequate in the slums. “Even though pipelines have been laid we only get a bucket of water. We depend on our neighbours for drinking water,” she says.

Most of the slum-dwellers use well or river water for their daily water requirements. The water crisis also affects other village residents living outside the slum area. Deepak Bhai, 50, is an embroidery worker, living right next to Nadi Mohalla. His family too depends on neighbours for drinking water. Patil says he hasn’t heard any such complaint from Chikhli. He says that the state government has spent '6 crore on setting up a pumping station and laying water pipeline under the SAGY.

Villagers complain that the waste dumped in the bins kept at several places is never cleared. “One such bin was kept near the well in mohalla. We threw the bin outside the village as it had become difficult for us to pass through this area,” says Parul Ben, pointing at the location, quite close to the well.

A local resident said that the paver block flooring hasn’t been done completely. “No work has been taken up since chief minister Anandiben visited Chikhli on February 16,” says the villager who did not want to be named.

Since Chikhli is a meeting point for 67 villages, it makes sense to establish a vegetable mandi here as it would help farmers in selling their produce. Such a market is estimated to cost around '50 lakh. Villagers suggest it should be set up under SAGY.

The SAGY guidelines have put special focus on the planning process. It provides for preparation of a village development plan, in consultation with local residents. It includes conducting a baseline survey, community resource mapping, finalisation of needs and plans.

The guidelines provide for completion of VDP in initial seven months. It has been 10 months but no such exercise has been undertaken, say villagers.

In fact, the guidelines list out the following areas under SAGY: personal development, human development, social development, economic development, environmental development, basic civic amenities and services, social security and good governance. All these activities are yet to happen. If villagers and party volunteers are to be believed, Patil is yet to come up with a comprehensive plan for village development.

Local residents say that the MP has improved village infrastructure but he has been equally focused on exaggerating and extracting mileage from these projects. No doubt, every single bench or waste bin bears name of Patil in bold letters. “Patil has helped the village in terms of sanitation, road and community infrastructure renovation. But it will be an exaggeration to call Chikhli a model village based on the limited work done,” says a local resident.

Patil has also published a booklet of all the works he accomplished in Chikhli in three months. The booklet lists 38 works which have been undertaken and/or planned to be undertaken in Chikhli. The completed work, as mentioned in the booklet, include a multispeciality hospital, a dynamic website, provisions for state transport and private vehicles for better transportation facilities. None of these works have started or even planned, say some village residents. Patil, nevertheless, maintains that all these works have been accomplished and says that people tend to forget once work has been completed.

Patil’s cleanliness drive and sanitation facility have made Chikhli more sensitive towards hygiene. Also, renovation of road and riverfront gives a unique look to the village.