As India waits for Wing Commander Abhinandan Varthaman's return from Pakistan, Google search on the 34-year-old 'braveheart' saw a major spike. Not surprisingly, people were more keen on finding out his caste more than anything else. 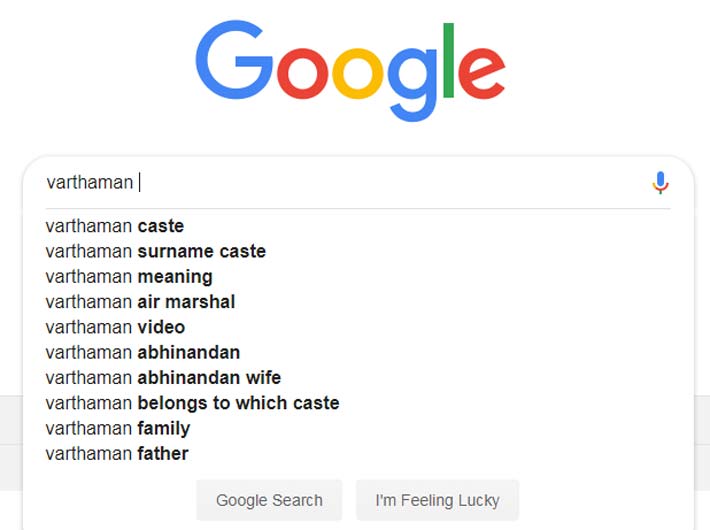 This is not the first time that someone is being seen from the prism of caste. When Hima Das won gold at the  IAAF World U-20 Championship in Tampere, Indians demonstrated once again what’s on their minds the most – caste. When PV Sindhu won silver at the Rio Olympics Google search on her caste skyrocketed. Google Trends showed how caste was the most searched “related topic” pertaining to Das.
Varthaman,an alumnus of National Defence Academy (NDA), has been in Pakistan's custody after his MiG-21 Bison was brought down in Pakistan occupied Kashmir post engagement with Pakistani Air Force jets violating Indian airspace on Wednesday. Wing Commander Varthaman is set to return today after Pakistan PM Imran Khan announces his release as a 'peace gesture.'
Twitter was quick to react with backlash for caste-minded people:

Firstly, he is Abhinandan Varthaman and not Vardhaman and secondly that he is an Indian Air Force Wing Commander should be more than enough for us to wish for his safe return. No religion, caste or class details needed.

@INCIndia IT cell is busily searching for Abhinandan Varthaman's caste!
Salute to the hero.#BringBackAbhinandan