You may not have noticed but indirect taxes are rising fast, fueling inflation and hurting the rich and poor alike. Blame it on government’s insatiable urge to spend – without fixing basic faults on revenue side Can Indian goods compete against foreign stuff even in the Indian markets, given the high taxes?

To collect all these taxes, the centre, states and municipal corporations have full-fledged tax departments which have full authority in law to enforce their just and unjust demands. Incidentally, this elaborate tax collection machinery is also financed by the taxes paid by Ram Lal. Everyone talks about the ills of black money and tax evasion but, seen from Ram Lal’s perspective, it is indeed surprising that we do not have more tax evaders.

The accompanying diagram gives an idea of the indirect taxes levied by the centre and states on various goods and services. The problem of multiplicity of taxes is compounded by the high and cascading rates of taxes. The proposed goods and services tax (GST) is touted as a solution to these problems and in the concluding part of this article I will try to examine whether GST would be the panacea it is claimed to be. But first a word about the existing structure. 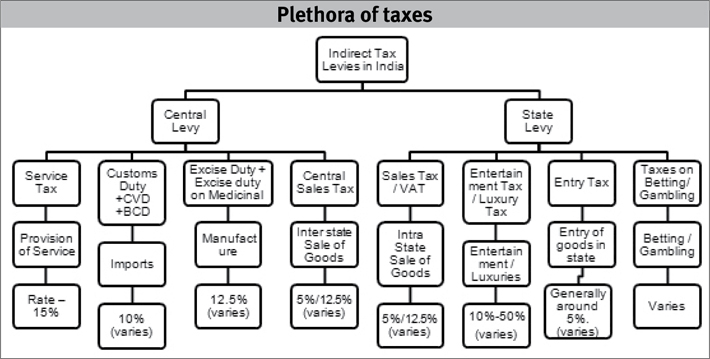 The high rate of indirect taxes works to the detriment of the economy in various ways. Firstly, it fuels inflation. On every call you make, service tax is levied at 15% of the call charges, which makes telephone calls that much costlier. Petrol and diesel which have a landed cost of around Rs 28 per litre are sold at nearly Rs 80 and Rs 65 per litre respectively courtesy central and state levies. These taxes have increased over the years. Consider service tax. When introduced in 2003, its general rate was only 5% and only some specified services attracted service tax. Now in 2017, service tax is levied at 15% on all services except some (exempted services). Though crude prices are now around $50 per barrel, petrol and diesel prices are the same as they were in 2012-13, when the price of crude oil was at an all time high of $110-$120 per barrel. Such increase in the rate of indirect taxes increases prices across the board leading to unbridled inflation. Governments are disingenuous when they blame extraneous factors for inflation, conveniently ignoring the role of rising indirect taxes. In our own country, to finance its rising expenditure, the government has imposed an unconscionably high levy on items of common use which has fuelled inflation and made our economy a high-cost, regressive economy.
The poor are the worst hit by inflation because they also have to pay the same increased prices as the rich but do not have the resources to do so. According to economists, indirect taxes are regressive, that is, the poorer you are the more indirect taxes (in percentage terms) you have to pay.