Abright yellow van with figures of children playing with a whirligig, a Newton’s cradle, a magnetic compass rolls into the Government Higher Primary School in Kittaganahalli, on the outskirts of Bengaluru. Students in the playground leave what they are doing and mill about it in excitement. For they know some interesting lessons, with hands-on practice, will soon follow. 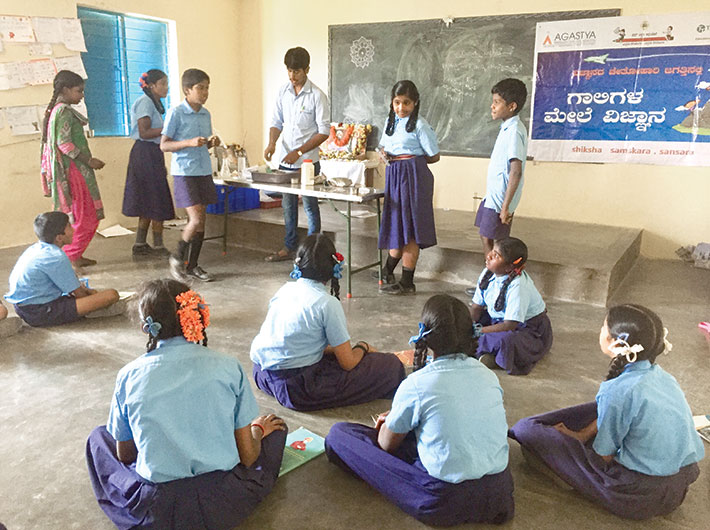 Everything is taught here through observation, hands-on learning, building. In the process, instructors and students both begin to appreciate how science works through hypotheses and testing of hypotheses, and rejection of those that cannot be proved. There are several low-cost models that let children learn concepts like resonance, focal point of lenses, centrifugal force and so on. Children learn about the life cycle of insects by observation at a butterfly park, about medicinal plants at a Mulika Van, where, besides the plants, there is a model of a human body in which plants that benefit particular organs have been planted where the organs are located. At the Pancha Valkala, there are plants and trees of various keystone species.
Over the years, Agastya has also pioneered teacher training programmes supported by companies under their corporate social responsibility (CSR) commitments. The flagship four-day residential course trains government school teachers in pedagogy, following a system based on Piaget’s theory of constructivist learning. Says Manjunath P, head of the teacher training programme, “We train them to become better resource persons by encouraging them to build their own models for teaching difficult concepts. So far, we have trained over 10,000 teachers.”
It’s a system that applies equally to students. At Navrachna, the hub where students are put through experiential learning, there are several successful prototypes, all developed by government school children. Natesh, the innovation lab instructor, says, “We teach children the skills of empathy, observation,  prototyping, presentation etc. Then we ask them to watch their surroundings closely and innovate to solve social issues their people face every day.” Some examples: tomato papads (to prevent wastage of tomatoes when prices fall); bio briquettes for chullahs; signboards that signal the arrival, departure and delay of buses; intelligent door locks for toilets to encourage clean toilet habits in rural areas.
Every year, over one lakh students visit the campus, those from highly engaged campuses complete seven-eight visits and those from less engaged ones make two-three visits. Says Padmanabhan Kumar, general manager at the campus, “There is widespread acceptance for Agastya’s unique methods among children, teachers and parents. They consider our staff to be more knowledgeable. There is enormous encouragement for new ideas at Agastya. Children learn more freely as they are not bound in a typical classroom environment.” To make this effective, visits to the campus are systematically planned, with PR teams coordinating with government agencies.
The road ahead
In the years ahead, Agastya wants to focus on a young instructor-leader programme and what it calls Operation Vasantha, aimed at bringing school dropouts into mainstream academics. It was Jayamma, 52, who spoke to the Agastya founder about the dropout rates at schools around Kuppam. With inputs from her, Ramji Raghavan and a team conceptualised a programme to train youngsters and village-level volunteers to conduct free classes, for at least two hours daily, six days a week, to dropouts aged 5-17 years. Last year, the number of Operation Vasantha centres in the country grew to over 500, taking the number of students served by them to 18,000. “It’s a joy to see confident students returning to the mainstream education,” she says. “We plan to increase our reach in many more districts.”
Padmanabhan Kumar adds that the foundation plans to encourage better care of the environment by creating “rainbow gardens of various flowering plants”. “Further, we want to break the walls between different academic subjects and focus on inter-disciplinary learning,” he says. “We also aim to make gamification of learning part of our hands-on approach.”
Classic discovery learning is called the Eureka moment or the Aha! reaction, in which the solution to a problem appears all of a sudden and with felicity. That model has been extended, at Agastya, to learning through the ‘Aah! Aha! Ha-ha!’ experience, in which the learner observes something and is filled with wonder (Aah!), then she solves a problem using what she has observed (Aha!), and enjoys herself in the whole process of experiential learning (Ha-ha!). It’s a methodology all schools could adopt. More power to the method.
feedback@governancenow.com