How Russia-Ukraine crisis will hurt your pockets

In the increasingly inter-connected world, the West’s sanctions will have repercussions in many sectors of economy The tensions between Ukraine and Russia are seeing new heights. All the media outlets, leaders of powerful countries, social media users and citizens all over the world are witnessing, and talking about, the historic and horrific progression of Russia’s invasion on Ukraine and the subsequent military events and evacuation stories that have taken place in the most recent days. Even though this conflict is taking place over 4,500 km away, in this globalised and highly interconnected world, India cannot escape the repercussions of this crisis.

For India, due to its foreign policy, this crisis is less about Ukraine vs. Russia and more about the West vs. Russia. The relations of these countries are intertwined in such a manner that India cannot afford to pick favourites in the long term. While India has improved its relations with the US over the past few years, the EU has become its third-largest trading partner. India and the US have also formed a strategic alliance through QUAD to counter China’s rise in the Indo-Pacific region. On the other hand, Russia has been a reliable partner to India in terms of fulfilling its military requirements. It provides over 86% of India’s military equipment. Also, Russia and India are part of a strategic alliance called BRICS to counter the West’s rising influence over the global economy. Either way, India’s economy will be affected due to this crisis.

This increase in price and inflation is not just on paper now. It can be seen through the products that we purchase on a regular basis. One recent real-life experience that we faced was regarding the price change in imported FMCG products that we noticed between purchases a month ago and purchases of the same products after the war began. We noticed a 10-20% increase in the price of these products after the war began. It is an indication of inflation that our economy is currently experiencing due to the Russia-Ukraine crisis. 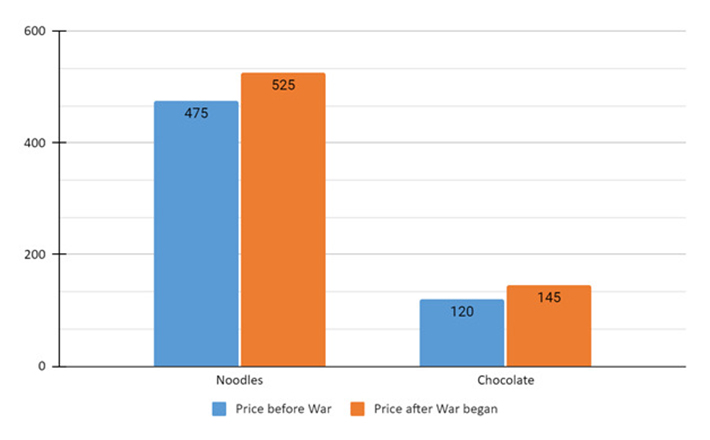 The continuous rise in oil prices, combined with a rise in the US dollar against the Indian Rupee and the foreign portfolio investment outflow from the Indian markets, have led the Rupee to fall to its all-time low, almost touching Rs. 77 against US dollar. This devaluation of the Indian currency along with supply chain disruptions due to the Ukraine-Russia crisis has caused disarray in trade for India with both Russia and Ukraine. India majorly imports sunflower oil, iron and steel, plastics and chemicals from Ukraine and mineral fuels, mineral oils, nuclear reactors, machinery and mechanical appliances, pearls, precious stones and metals from Russia. Even though India is trying to secure these imports, there is still a lot of uncertainty due to the ongoing conflict. The disarray in trade with these countries can lead to an increase in the price of these resources.

Russia is the third largest producer of nickel. As the crisis worsened, the prices of nickel rallied so much in the span of a few days that it rose from $30,000 to $100,000 per tonne. Such was the rally that the London Metal Exchange had to stop the nickel trade altogether. Now, nckel is a metal that is always in high demand as it doesn’t corrode easily. Also, it is used in the production of stainless steel and lithium-ion batteries. Stainless steel is used in culinary products, medical equipment, huge architectures and automotive and aerospace domains. Lithium-ion batteries are used in a huge variety of products such as phones, electric vehicles, electronics, toys, etc. This huge increase in the price of nickel can have a domino effect on all related products and can lead to a slight increase in the price of these products.

Russia is set to ban commodities exports as a response to the sanctions by the West. Just like nickel, commodities such as coal, platinum and palladium are other major exports by Russia which can be affected due to the crisis and have an impact on the Indian economy. However, on a positive note, the increase in wheat prices may benefit Indian farmers. As the global price of wheat increases, Indian farmers will be able to sell their produce for a good price. Also, this means that the government will spend less on procurement which would further reduce the subsidy burden for the government.

Times of war create great difficulties for both sides of the war as well as for people who have not taken any sides. India, for instance, abstained from voting on Russia’s invasion during the UNSC resolution, the US took it as India supporting Russia and there were even talks about the US imposing sanctions on India because of this. The Indian economy, which is already starting to see some of the impacts of the Russia-Ukraine crisis, may even need to be ready for possible US sanctions. The one major learning from this entire situation is that India needs to be more Atmanirbhar (self-reliant) in order to protect itself from future global crises and boost the economy.