The ‘invisible hand’ and the burnt-out feet 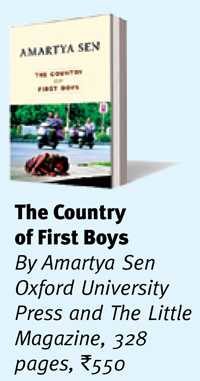 The picture of cracked and burnt-out feet, with a missing toe, on the cover of Harsh Mander’s new book ‘Looking Away: Inequality, Prejudice in New India’, does one thing convincingly: it mocks the ‘invisible hand’.

Radha, a girl probably not more than ten years old, is on the cover of Amartya Sen’s new book. She can be seen busy writing in her notebook, sitting on the streets of Ahmedabad, where she ‘lives and studies’. The picture endorses the title of the book: ‘The Country of First Boys’.

The two books released recently are definitely not a comfort read for a weekend. They question our sensibilities, mock our celebrations and ridicule our indifference towards the less fortunate children of development. Both the books present a contrasting picture of the India that claims to be competing with the first world in its ‘enterprise’ and the resulting growth and development.

While Sen in his essays concerning inequality reflects more on the structural failure in understanding and ensuring equality, Mander invokes a sense of responsibility towards the disadvantaged, which seems to be lacking. He writes, “There is indeed a startling absence of compassion among a majority of well-to-do Indians towards the millions who have no advantages of birth to shield them from hunger, oppression, violence, squalor and humiliation. A dispassionate external observer would be bewildered by middle-class India’s capacity to look away when confronted with enormous injustice and suffering; by our society’s cultural comfort with inequality.”

He raises an important issue: the legitimisation of the inequality and the way a calculated discourse has been built around it to mark it as a natural consequence of a meritocratic society, where lazy and inept are meant to suffer.

“That the accident of where a child is born still determines her chances in life almost irrevocably—whether and how long she would be able to study, and with what quality, the vocations open to her, the limits of her wealth and social standing, even her most basic well-being and dignity—is widely considered unproblematic, even legitimate. Many people of wealth and privilege are convinced that they have what they do because they deserve it, and that those who are in want and need also deserve their lot—because of laziness, addiction to drink, lack of education, lack of ambition, low capabilities in general, and the profligate breeding of large families,” writes Mander. 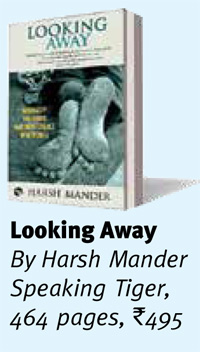 American political theorist Ronald Dworkin posed a very important question in his book ‘Sovereign Virtue’ published in 2002: Is “equality the endangered species of political ideals”? Concerns with equality as an essential political goal has been acknowledged for a long time.

However, it has been felt in the last few years that too much stress on ‘formal equality of opportunity’ had ignored the inequality caused by the flawed structures of distribution. As Judith Squires, professor of political theory at the University of Bristol, writes in a paper titled ‘Equality and Difference’, “It certainly seems that a concern with equality of outcome has been eclipsed in the popular imagination by an understanding of equality that focuses on formal equality of opportunity.”

This inequality, resulting from the sheer failure to ensure any equality of ‘outcome’, is reflected in the increasing gap between the privileged and the destitute, adding to it is a bigger concern – the former’s ability to ‘look away’ from it and tendency to celebrate the achievements of the select few as success of all, which is the subject of the books under review.

‘The Country of First Boys’ is a compilation of 13 articles written by Sen in the last 15 years and first published in The Little magazine. While the subjects vary from relevance of Rabindranath Tagore to the vision behind resurrecting the ancient Nalanda University, an inquiry into the nature of inequality and deprivation prevalent in the recent times clearly come out to be the central concern of the book.

In the essay ‘The Country of First Boys’, first published a decade ago, Sen asks if the presence of a miniscule number of achievers whom he refers as ‘first boys’, who are reportedly taking away good jobs from “previously unthreatened westerners”, in any way reflects the overall success of the Indian education system.

Sen, while rejecting the concern of Europeans and Americans about their jobs being snatched away by Indians as nothing more than “good old fashioned paranoia”, acknowledges some stories of splendour which is reflected in the presence of Indians in leading positions in western academia, management and so on. However, he marks the whole euphoric, chest-thumping celebration of India’s ‘story’ as the “obsession with first boys and their success”.

“The system makes sure that some young people, out of huge pool of young, manage to get privileged education. The picking is done not through any organised attempt to keep any one out (indeed, far from it) but through differentiation that are driven by economic and social inequality related to class, gender, location, and social privilege.”

He adds, “The privileged, to their credit, by and large do very well – they don’t waste opportunities, their well earned success comes, first, in the educational establishment themselves, and then in the world at large, impressing Indians and foreigners alike. The country then celebrates with abandon the ‘nation’s triumphs’. Furthermore, not only do the first boys do well in life, they can also relish – of course with becoming modesty – the homage they receive for having ‘done their country proud’. Meanwhile, the last boys, and particularly the last girls, can’t even read, not having had the opportunities of going to a descent school – or any school at all.”

A bit more than a coincidence was that while going through a chapter titled ‘For the Crime of Destitution’ in Mander’s book, I received a press note by the Chandigarh administration on August 18 about a joint drive to control the menace of beggary. It said that two ‘adult beggars’ and three minor beggars, all residents of a village named Kansal in Punjab, were caught from a local temple. The adult beggars were handed over to police for lodging an FIR against them.

The minors were handed over to the social welfare department. The criminalisation of destitution attracts a scathing reprimand by Mander.

Mander, while criticising the anti-beggary laws, points out that the definition of begging even includes simply “having no visible means of subsistence”. “In other words the law makes destitution a crime, punishable by incarceration. Since many beggars suffer from various diseases, both bodily and mental, it implicitly criminalises ailments as well.”

He adds, “In Chennai, I found that government spent '3.6 million in 2006 to confine 116 alleged beggars in sub-human conditions, of which 86 percent was expended on staff salaries.” Questioning the rational and intent behind such policies Mander raises a pertinent question: Why did the government fail to spend a fraction of this money on the rehabilitation and social security of the “most wretched out of our earth”?

While both the books raise important questions about discrimination and deprivation, more importantly they expose us to a form of destitution which usually evokes fear and pity but sometimes is so repulsive that it compels us to ‘look away’. And that is indeed frightening.