Why do private enterprises in India shy away from this sector? After the liberalisation of the insurance industry in 2000, private firms (mostly in partnerships with foreign firms) have readily taken to the sector. Till FY18 there were 23 private firms in the life insurance sector and 21 in general insurance segment. However, it was only in 2016-17 that the first private domestic reinsurance firm, ITI Reinsurance, entered the industry and was yet to begin operations by the end of FY18. A major reason for the muted interest of private enterprises in the reinsurance sector was, and to an extent remains, the regulations governing the sector.

The mandate to the Insurance Regulatory and Development Authority of India (IRDAI) in respect of reinsurance lies in the provisions of Section 14(1) and 14(2) Sub Section (f) of the IRDAI Act, 1999 as well as Sections 2 (9) d, 34F, 101A, 101B and 101C of the Insurance Act, 1938. IRDAI subsequently has framed regulations pertaining to reinsurance by both life and general insurers, which lay down the ground rules for transacting reinsurance business. 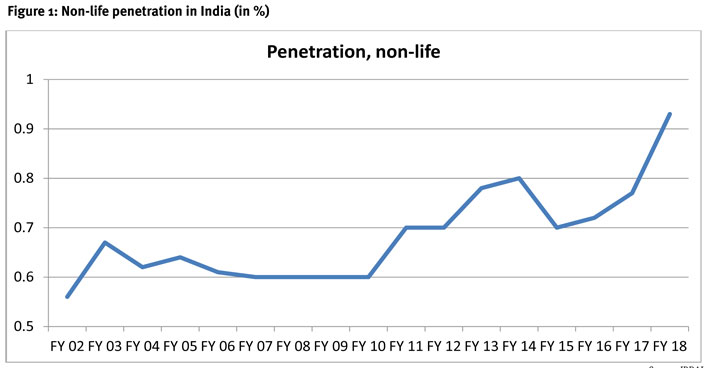 Reinsurance challenges
The reinsurance sector in the country is plagued and constrained by the twin issues of regulatory discrimination against private players and the limited size of the market. Let’s sequentially elucidate both the issues below.
Regulatory discrimination: IRDAI has always stipulated that the reinsurance programme of reinsurers and insurers operating in the country should be guided by the objective of, amongst others, maximising retention within the country, subject to proper and adequate diversification of risks (Section 3(1), IRDAI (Re-insurance) Regulations, 2018).
The above objectives are also reflected in the reinsurance regulations of the past and present. To illustrate the point, as per Section 101A of the Insurance Act 1938, every Indian insurer must cede a certain percentage of the sum assured on each policy for different classes of insurance written in India to Indian reinsurers.
Further, it has been explicitly included in the 2018 reinsurance regulations that insurers after obtaining best terms for ceding from all Indian reinsurers, transacting business during the immediate past three years and at least four Foreign Reinsurer’s Branches in India (FRBs), have to offer the best terms for participation in an order of preference, such that the first right of refusal lies with Indian reinsurers who have been active during the immediate past three years. This implies that General Insurance Corporation of India (GIC Re) has the first right of refusal.
Hence, even after ceding the mandatory percentage to Indian reinsurers, which is GIC for all practical purposes, an offer must be made to GIC for all the reinsurance deals and GIC may accept in whole or in part.
Such an order of preference regulation is tantamount to granting monopoly rights to the state reinsurer GIC, which already has historical advantages. Monopoly powers in a reinsurance setting not only allow for inefficiencies to creep in but additionally, the anti-competitive nature of such a market prevents innovation. This happens as the firms find their profits diminished by cost of regulatory compliance and, therefore, not adequate to undertake such endeavours and service the market.
Limited insurance market size: The scope for reinsurance in India is severely constrained by the abysmally low insurance penetration, especially that of general insurance (see Figure 1).
The non-life insurance penetration levels have never crossed the threshold of 1 percent since the sector was liberalised. Further, if we take into account the fact that the Motor Vehicles Act, 1988 mandates (under section 146) that every vehicle be compulsorily insured for third-party risk, the penetration level falls by another 40 percent, since motor insurance gross premiums have accounted for more than 40 percent of total non-life gross premium constantly since 2001.
Hence, with limited insurance reach there might not be enough business available for ceding to trigger the economies of scale for reinsurers. A low business volume is especially a concern for domestic reinsurers since they do not have international presence to offset this constraint.
Increasing reinsurance depth
The way around the aforementioned order of preference regulatory hurdle is to increase the size of the insurance and reinsurance market to such a magnitude that GIC Re is stretched in its operations and there is a considerable spillover of reinsurance business to the private players. Following are the ways to do so.
Catastrophe insurance: For long India has suffered dearly from the vagaries of mother nature. Little has been done in the way of recompensing the monetary damage from such disasters. The concept of catastrophe insurance is largely unknown, and when known, it is seldom utilised.
The dismal provisioning of catastrophe insurance is in spite of the fact that calamities have led to huge uninsured losses in the past. Major disasters since 1999 have led to losses of more than $33 billion of which only 7.2 percent damages were insured.
This is in stark contrast to the scenario in countries, which make extensive use of insurance. The USA is routinely ravaged by hurricanes/storms, but unlike India, widespread availing of insurance has meant that 48 percent of the damages from the hurricanes/storms since 1999 are insured (Source: EM-DAT: The Emergency Events Database - Université catholique de Louvain (UCL) - CRED, D. Guha-Sapir - www.emdat.be, Brussels, Belgium).
The total losses and the uninsured losses from the major disasters that occurred in India between 1999 and 2017 were approximately 1.5 and 1.4 percent of the average Indian GDP between 2014 and 2017 (Calculation done using World Bank current GDP data). Additionally, it has been estimated that more than $2 billion of major Indian cities’ GDP is at risk each year from floods, tropical winds and earthquakes (see Table 1). Therefore, we see that not only have disasters wreaked havoc in the past but remain an imminent danger in the present and near future.
By increasing the awareness of concepts like catastrophe insurance, the pool available for ceding is bound to register a multi-fold increase. Even if the retail uptake of insurance is slow, the government can start insuring its businesses and properties to expedite the process.
Government-provided public infrastructure like water pipelines, electrical installations, ports, airports, railways, government buildings, etc. often bear the brunt of the disasters whenever the two cross paths. Between 2010 and 2017, the damages to public utilities from heavy rainfalls and floods alone were in excess of Rs 1 trillion or $19.4 billion (conversion in USD is done using annual, currency exchange data from Federal Reserve Bank of St. Louis), and was 54 percent more than the damages caused from such events to houses and crops. In spite of incurring such high losses from natural disasters, the government so far has refrained from insuring its properties and assets primarily because of the huge premium expense such an exercise would entail.

However, a way around the issue can be worked out and a specialised plan, implementable in phases, can be operationalised given the extent of business being offered to insurance firms. Such plans, which advocate mandatory insurance of private homes in highly vulnerable areas, government properties and public utilities have been mooted by both the insurance regulator IRDAI and National Disaster Management Authority (NDMA) in their discussion paper titled ‘Disaster Relief and Risk Transfer Through Insurance’ (2013).
With the influx of government and retail business and the subsequent increase in sum assured, there will be a spate in the insurance being ceded to reinsurers, not all of it accruing to GIC Re.
Lowering the Net Retention: The reinsurance market in India is doubly constrained in that both the primary insurance reach and the subsequent ceding of it to reinsurers are limited. A look at the net retention of insurance, i.e., the insurance amount not ceded to reinsurers by Indian insurers makes the contention clear. Between FY06 and FY16, Indian general insurers maintained a net retention ratio in the range of 83-94 percent of gross direct premium, while the comparable figures for OECD countries ranged from 72-74 percent.
The primary effect of such high retention levels is that the benefit of ceding sufficient amount of insurance to reinsurers is not accrued by Indian insurers. Reinsurers by taking on the risks of primary insurers free up the insurer’s capital and allow them to write more business. In this way they create a virtuous cycle wherein the increased stability from insurance reproduces itself and feeds into the economic growth. This is in addition to the domain expertise that reinsurers provide and which is seldom found with primary insurers.
Clearly, with increased ceding by the insurers, the reinsurance market will get a fillip and become more attractive for foreign/private reinsurers. n
Sharma is a research associate with Pahle India Foundation. Views expressed are personal.
(This article appears in the February 28, 2019 edition)