Why Bastar women are scared As the battle rages on and security forces and Maoists have sharpened their attacks on each other in recent times, there have been rumours and stray reports of excesses, in particular of an incident of mass rape. Now there’s official confirmation of it: seven tribal women were sexually assaulted by security personnel in one incident.

National Commission for Scheduled Tribes (NCST) chairperson Rameshwar Oraon, who along with a fact-finding team visited the state in the first week of April, told Governance Now: “In Bijapur I met the seven tribal women and they told me that the security forces had sexually assaulted them. They have shared with me in writing details of other physical atrocities too. I have had a detailed talk with them. It is unfortunate that such an incident has taken place.”

For the past five months, the rights activists from the state and at the national level have been trying to draw the administration’s attention to these atrocities, but in vain. They, however, succeeded in lodging an FIR with police against unidentified people for the mass rape.

During this time, the activists as well as some mediapersons alleged that they had received threats – and some were attacked too – by those interested in keeping the matter under wraps.

When a delegation of NCST led by Oraon visited Bijapur with a fact finding team and other areas to investigate the matter, they received seven written complaints from the tribal women with the details of molestation and physical violence they suffered. According to the complaints, security forces fighting the Maoists allegedly had sexually assaulted the tribal women in the insurgency-hit Bastar district. More than 10 women and a minor girl were forcibly stripped and allegedly raped by the joint security forces in Peddagellur, Budigicheru, Gudam areas of Bijapur during October 20-28, 2015 while the security forces were carrying out combing operation in the area. 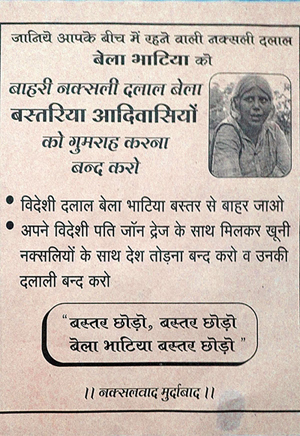 The fact-finding team, returning to Delhi on April 11, will submit a detailed report about the incident soon.

Notwithstanding the threats and attacks, a bunch of activists and journalists continued to fight for justice for the tribal women who were molested and raped. Alongside, the Maoist attacks on the security forces too have been on the rise since the incident. In March alone, three CRPF commandos were killed and over a dozen paratroopers were injured in a series of ‘encounters’ between the two sides in Sukma, Chhattisgarh’s worst Maoist violence-affected district. The entire Maoist heartland – including Kandegaon, Narayanpur, Bijapur, Bastar, Dantewada, Sukma and Kankar districts – has registered a rise in violence after the incident.

Bela Bhatia, a Bastar-based researcher and rights activist working for the tribal welfare for a decade, raised before the local administration and police the matter of the mass rape. Bhatia soon had to face a backlash. In late March, anonymous pamphlets were distributed in Bastar, naming Bhatia as anti-national and a “broker” for the Maoists, asking her to leave Chhattisgarh. Ignoring the threats, Bhatia along with the Jagdalpur legal group, an informal platform of independent lawyers, managed to register the first FIR in the matter. She also assisted the tribal commission in reaching out to the rape victims.

“See, justice is the only way to deal with the issue. The tribals want justice and this is the only way to gain their confidence. According to our understanding, there should not be any military action to sort out the problem. The state needs to acknowledge that atrocities have happened and act on it as priority. The scenario will change and the anger would subside [if the state does so],” Bhatia told Governance Now on phone.

Oraon had a day-long meeting with Bhatia. “During my discussion with the NCST chairperson, I stressed only on this point that there should be preventive steps with a humanitarian approach. Otherwise, it [solving the problem of the Maoist violence] would be further difficult.”

Taking a cue from the points raised by Bhatia, who had submitted a comprehensive study of the issue to the planning commission in 2008, the NCST has recommended to the state that the mass rape case should be investigated by CID and the local police should be immediately removed from the probe.

Isha Khandelwal, a lawyer from the Jagdalpur Legal Group representing the tribal women who have been sexually harassed, says it is not easy to convince the state to come forward and acknowledge the atrocities. “The Bastar district collector, Amit Kataria, clearly told us that the administration was working on ‘Mission 2016’ [against the Maoists] and it will not tolerate anything that will come in the way.” Khandelwal, shuffling between Jagdalpur and Delhi for legal formalities, was to make a detailed representation before the NHRC on April 11.

Sections of the state’s media, battling the odds for long while reporting on the conflict, feel there should be a comprehensive negotiation and rehabilitation plan to solve this decades-old issue. They also admit that the killings of the uniformed men by the Maoists have gone up in the past few months after the incident.

Ruchir Garg, a former editor of the state edition of the Nai Dunia daily, says, “Three sides are constantly fighting one another. The tribals are fighting with the security forces, and then there are the informers. Both security forces and the tribals kill those people they find suspect. The mutilated bodies of informers and atrocities on tribal women are not new. Such incidents do occur frequently and it is always difficult to identify the real informer and the real tormentor.”

He adds, “In the past three months the pace of violence has gone up but one has to understand the whole issue to make sense of it. This region was never violence-free. There were killings even ten years ago and it is happening even today. The effort that has been put in to solve the problem has further compounded it. Since the incident of the mass rape, the situation has worsened.”

Political equations also add to the problem. The state has been ruled by Raman Singh of the BJP for the past 15 years. When the Congress-led UPA ruled at the centre for a decade, the chief minister repeatedly blamed the centre for the lack of a united approach to the Maoist tangle, for which the tribals had to pay the price. Now, with the BJP-led NDA at the centre, Singh has one excuse less to justify the failure in quelling the rising violence.

Prakash Singh, a veteran police officer and former director general of Border Security Force (BSF) who has written an authoritative book on the Naxal violence, says, “The problem is there: once we accept that, we can work towards a solution. Now the solution is also there: one way is to negotiate and the other way is to use military operation. It is a delicate issue involving the tribal people, so I would vote for the peaceful method and I am sure it will work.”

The state and central governments, both the current and previous dispensations, have been experimenting more with the military option and less with the negotiations. Local people speak of the air cover being given to the security operations – which would mean the conflict has gone a level up, but the state government is tightlipped about the situation and repeated efforts for comments from the senior Chhattisgarh officials including the director, public relations, Rajesh Toppo, were not fruitful.