With the relaunch of e-bhasha as a mission mode project, there is a fresh urgency to create content and technical solutions in Indian languages Computer literacy is often linked to the knowledge of English. With the launch of the e-bhasha project, the government is hoping to make the internet more accessible. The project aims at providing computing tools in Indian languages, thus making government services available to a substantial part of India. These tools were developed more than a decade ago, but sadly remained non-utilised. However, the government has now decided to bring in the e-bhasha project under the umbrella of the national e-governance plan (NeGP) as a mission mode project (MMP).

The project that is being jointly driven by the department of electronics and information technology (DeitY) and technology development for Indian languages (TDIL), will be implemented in all departments across states and promises to provide all government services in 22 scheduled Indian languages. It will also provide a range of technical solutions, browsers and content in local languages. The multilingual aspect will ensure that government services have a wider reach and are accessible to citizens in local languages. The department hopes to get approval for the MMP by early next year.

Although TDIL has been finalised as the nodal implementing agency, the idea is to create a separate body, the centre of excellence (CoE) for localisation of Indian languages that will do the actual implementation on the ground level. Discussing the wing’s role, Swaran Lata, officer-in-charge, human-centred computing division, TDIL, told Governance Now: “We are like the backbone MMP. We will provide tools and solutions that can be used to generate the content in Indian languages. We will also provide standards and guidelines for the electronic governance domain. The final service delivery will be the responsibility of the various departments.” 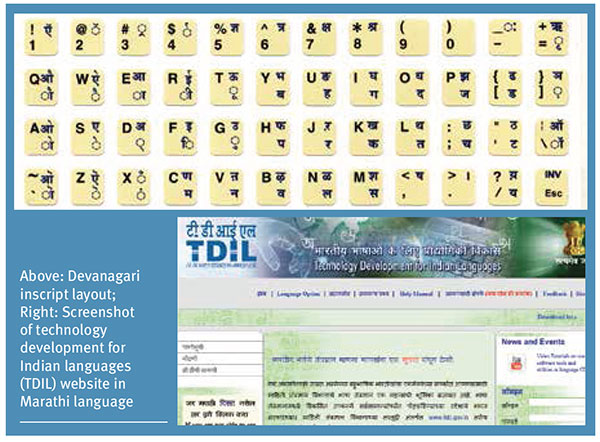 Elaborating on how this platform can potentially transform the lives of the common citizen, Rajat Moona, director general, centre for development of advanced computing (C-DAC), said, “More people will get connected to government services now. It will bring the government closer to the citizen. The platform will change the way people carry out government services.” C-DAC has been working on local language computing and has been a key player driving the initiative on the technology front.

As an MMP, e-bhasha will have two main components: productisation and capacity building. The first step towards creating the e-bhasha platform will be the productisation. As Rajendra Kumar, joint secretary, DeitY, pointed out, “E-bhasha is all about the use of computing tools in Indic languages. It is about the productisation of these software tools, which means the ultimate utilisation of these tools for the end user.” In order to fully implement the MMP, proper training as to how to implement it at the ground level has to be given. The capacity building module of the MMP aims to train both the government departments as well as their technical teams. The training will be implemented jointly by DeitY and TDIL.

After this, content in these languages will be generated by various institutes and research and development organisations. Explaining that the service delivery framework for the MMP has already been designed, Rajendra Kumar said that the centre will extend total support to all the states in implementing the project.

Work to provide support in the form of tools and content in Indic languages has been going on in the country for more than two decades. C-DAC has been involved in this since 1988. The centre has been working towards developing tools that support Indic languages. Moona said, “We have been supporting Indic languages since 1988, whether it is from left to right or vice versa and languages with multiple fonts, like Konkani.

C-DAC has already developed a number of solutions that support the Indic languages including a mobile touch keypad that can be downloaded from its website. Further a screen reader and various templates are also available. “The keyboard is slowly disappearing. We have a touchscreen that supports 27 Indic languages,” Moona said.

One of the key initiatives by TDIL has been in the form of the Sakal Bharti font, a type of open font format (OFF). It is a standard font, applicable to all the 22 schedule languages, irrespective of the platform, programme and language. It allows one to view and edit any document without any loss of data. Similar efforts have also been made by private players in creating the required tools to increase the reach the Indian languages. The Centre for Internet and Society (CIS) has launched several initiatives, including translating Wikipedia in regional languages and creating screen readers that support indigenous languages.

With the increase in internet penetration and the resulting increase in demand, private players, including digital giants Google and Microsoft, have joined hands to promote content in Indian languages. The initiative called the Indian languages Internet Alliance (ILIA) was launched by Google to cater to the Hindi-speaking population by providing content and solutions. Launched around the same time as the e-bhasha project, the two projects are expected to complement each other.

In support of the private initiatives that are coming up, Lata explained that an ecosystem has been built. “What happens is that in areas where it is not commercially beneficial, it has to be the government which steps in first. I think the government has received a wake-up call in terms of both e-governance as well as languages.”

The chicken or the egg?

The resources have been available with the government for the last two decades, yet it is only now that the push for local languages has got the attention it much needed. According to Kumar, while C-DAC has been involved in developing these tools and their language department, GIST, has been around for at least 15 years the implementation in e-governance did not happen.

Lata further elaborated, “It is not the correct perspective to say that the localisation of languages is just a frontend issue. It is an architectural issue and a language solution should enable people to search access and retrieve data in the local languages.”

The surge in the number of users as well as the new government’s heightened interest in electronic governance has created an increased demand. “The push for Indian languages has been there for a long time. Many government websites are bilingual (English and Hindi).  However, with the introduction of electronic governance a lot of activities have been happening. The need for Indian languages has become much higher,” Moona said. “It is an evolutionary process. Internet governance is still a new thing in India, it is only after its introduction that the tools and support for local languages has been required.”

Sunil Abraham, executive director, CIS, said, “Creation of Indic content cannot be left to a single government entity. It needs massive effort from all concerned stakeholders. The reason that there is very little Indic content online is because most internet users today either are comfortable using English or don’t have sufficient purchasing power to sustain different business models. As more and more Indians come online, more and more businesses will begin to leverage Indic content. However, focused and enlightened investments by the government would be very useful in helping Indic languages catch up on the internet.”

With Indic languages receiving a push from both the government and private players, it might just be time that the internet really becomes a tool for everyone.