‘Do you know that India’s largest biopharma company was founded because of a gender bias?' Kiran Mazumdar-Shaw (A screenshot from the Women in Chemistry video, created by the Chemical Heritage Foundation, in which she discusses her work: Source: Science History Institute) 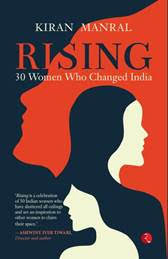 For a book lover, there are many ways to celebrate the International Women’s Day. Rupa Publications, for example, has two new titles, ‘Her-Stories: Indian Women Down The Ages ─ Thinkers. Workers, Rebels, Queens’ by Deepti Priya Mehrotra, and ‘Rising: 30 Women Who Changed India’ .

‘Rising’ is an ode to inspiring Indian women who broke the glass ceiling, forged their own path and changed the nation. It is a must read for aspiring #BossWomen and little girls who seek to change and lead the world. The book has detailed stories of 30 icons from different walks of life. From politics to sport, from the creative and performing arts to cinema and television, from business leaders to scientists, legal luminaries and more, this book features the stories of these much celebrated, fabulous women: Sushma Swaraj, Fathima Beevi, Mahasweta Devi, Amrita Sher-Gil, Lata Mangeshkar, Anita Desai, Bachendri Pal, Rekha, Shakuntala Devi, P.V. Sindhu, Ekta Kapoor, Kiran Bedi, Mary Kom, Kiran Mazumdar-Shaw, Gayatri Devi and much more.

Manral, an author and novelist based in Mumbai, looks at what shaped them, the challenges they faced, the influences they had, the choices they made and how they negotiated around or broke the boundaries that sought to confine them, either through society or circumstance.

From diverse backgrounds, different generations, they have risen through sheer grit, determination, bolstered with passion, and are, today, names to look up to, to hold out as examples to the next generation of young women and girls, giving them courage to reach out to their dreams.

Here is an excerpt from ‘Rising’:

Excerpts from an interview:

As a young woman in a very male-dominated industry, starting at college itself, was the sexism you faced overt or subtle? How did you deal with it, and what would you tell young women today looking to enter and make their mark in fields considered ‘off limits’ because of gender?

I often joke, ‘Do you know that India’s largest biopharmaceutical company was founded because of a gender bias?’ I decided to turn entrepreneur because of the gender bias I faced in the brewing industry. On turning entrepreneur, I came across some other facets of gender bias.

In those days, women were not perceived as good entrepreneurs. Banks and financial institutions were reluctant to fund me and some even suggested that my father should be the guarantor for any loans. I refused to allow him to stand guarantee and it took several failed attempts before I managed to meet bankers who had the confidence of lending to a woman-
led enterprise.

My being a woman also made it difficult for me to hire people. Potential recruits felt working for a woman entrepreneur—or for a woman-led company—was not going to provide them job security. So I had a tough time trying to find people to work for me. Some even assumed I was the secretary to the managing director (MD), and not the MD, when they came for interviews. Finally, I got two retired tractor mechanics to be my first employees, and rented a shed to house the enzyme-extraction machinery I had purchased, and Biocon was born.

Moreover, my suppliers were reluctant to give me credit because they did not have confidence in my business abilities. When I negotiated business, many of them would feel very uncomfortable dealing with a woman and suggested they discuss prices with my ‘manager’. It took a sustained effort on my part to educate these patriarchal people who were completely unfamiliar in dealing with women.

It is my firm belief that knowledge makes no distinction of gender. As a woman, all you need is the self-belief that you can excel in whichever field you choose to make a mark in. Courage of conviction and perseverance to overcome disappointments and failures are the hallmarks in this journey of endurance. Women need to believe in their goals and aspirations and attain them with confidence!

Setting up Biocon was an act of faith and determination. You have called yourself an accidental entrepreneur. What drove you back then to set up something of your own at a time when entrepreneurship was not the buzzword it is now, and people preferred secure jobs? What were the challenges of being a young woman in a highly specialized field as an entrepreneur?

After setting up Biocon, I was single-minded in my determination to see my venture succeed. I believed that by focusing on one step at a time, I could make things happen if I adopted a sensible and adaptable approach. I have never been one to give up easily, which is why, when I faced the initial hiccups that any start-up in India faced during the pre-liberalization period, I simply became more determined to make it work.

I started by making eco-friendly speciality enzymes for the first time in India. These enzymes helped several industries replace some of the polluting chemicals used in their processes.

Having attained success in enzymes, I leveraged my knowledge of biotechnology to try and disrupt the healthcare industry by introducing affordable biopharmaceuticals for patients who needed them the most. What spurred me on this mission of making a difference to global health was the realization that a significant proportion of the world’s population does not have access to essential medicines and, where healthcare does exist, it is unaffordable.

From wanting to ‘green the world’ through eco-friendly enzyme technologies, my mission changed to ‘heal the world’ by developing affordable, life-saving drugs for patients across the globe. In the course of my journey, I leveraged innovation, differentiated technologies and a talented scientific pool to create a world-class, agile organization. In doing so, Biocon was able to scale great heights and emerge as a credible global biopharmaceuticals player.

As a young woman in a highly specialized field, the biggest challenge I faced was that of building credibility not only for myself but also for the nascent field of biotechnology that I had decided to pioneer. Getting people to change their mindset was by far the toughest challenge I faced.

As a woman who is a self-made billionaire in the country, you are an icon to many. What would you tell young girls who look up to you to keep in mind as they set out to achieve their goals?

In my entrepreneurial journey, my ability to face and learn from failure and move on has helped me a great deal in achieving success. It is a trait that every girl needs to have in order to be successful. Failures provide the experience that no amount of success can. I am not suggesting one must seek failure, but when it does come your way, take it as a learning experience. I often say failure is temporary but giving up is permanent. We should never feel defeated in the face of failure, but should take it in our stride, learn from it and move on.

[The extract reproduced with the permission of the publishers.]