Sardar Patel and the making of a new India: A diamond tycoon reminisces

Excerpt from Govind Dholakia’s autobiography: “The new is built over the old as the building is made over the foundation…” 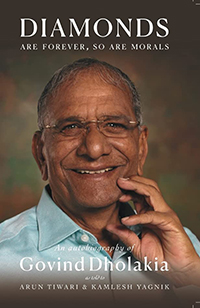 Diamonds Are Forever, So Are Morals: Autobiography of Govind Dholakia

As Told to Arun Tiwari and Kamlesh Yagnik

Govind Dholakia’s life is a story of a diamond polishing worker who created a billion-dollar company and shifted the epicentre of the trade out of Belgium to India. This rags-to-riches saga now forms his autobiography.

Dholakia strongly believes that high morals and values have helped him largely in making the right decisions in life. Decisions that helped him succeed, from nobody to a diamond tycoon, he has an inclination towards spiritual wellbeing. Hence the autobiography is a fine balance between his spiritual self and his karma.

Prime minister Narendra Modi says of the book, “…From the reminiscences and incidents of childhood, early education, to picking up life skills on the personal and professional front, nuggets of inspiring information are compiled in the book. The simile between morals and diamonds in the title of the book itself sets the tone. The emphasis on morals is particularly relevant to the modern times, especially for our youth. The reader gets swayed with the autobiography’s flow of thoughts…”

Here is an excerpt from Dholakia’s autobiography:

It is indeed difficult for the current generation to understand the magnitude of Sardar Patel’s contribution to independent India. Nevertheless, the ‘Statute of Unity’ created a new awareness. I organized buses for SRK employees and their families to go there and they returned inspired and informed. Many of them were indeed surprised to know that there was a serious attempt to take away Junagarh from Gujarat. So, let me start this chapter with that story which I had heard from my father. The new is built over the old as the building is made over the foundation and we cannot understand the passion of Narendrabhai Modi to create New India militarily strong and socially aware of their civilization without knowing the horrendous things that had happened to us as a nation in the past.

In the run-up to the Indian Independence 550-odd princely states, another legacy of the British Raj, were being divided up between India and Pakistan. The Nawab of Junagadh was an eccentric character, famously obsessed with dogs. His Diwan carried out the actual governing of the Junagadh. In the last months of British India, his Diwan was a Muslim League politician named Shah Nawaz Bhutto, the father of future Pakistani Prime Minister Zulfikar and grandfather to Benazir Bhutto. On 15 August, as independence rolled around, Junagadh declared itself acceding to Pakistan.

Sachchidanand Swami narrated once that one of the most potent weapons during the Aarzee Hukumat movement, the campaign against Junagadh Nawab’s decision to merge with Pakistan, was the economic boycott of the state. In fact, special boycott committees were constituted mainly in Mumbai and various other cities across India, which strategically planned the economic collapse of Junagadh state. The Nawab fled to Pakistan, taking all the money in the state treasury, most of his wives and few of his dogs with him. Bhutto was left in charge of the state.

The drama soon ended with an anticlimax. Bhutto kept on asking Pakistan for military and financial assistance, but the help never came. Focused on annexing the Kashmir Valley, Pakistan had nothing to help Junagadh with. Bhutto eventually relented on 8 November, offering India to take over the reins of Junagadh. Government administrator reached Junagadh on 9 November, only to discover that Bhutto had already decamped for Pakistan. At the end, fate of these disputes was sealed by military power. A plebiscite was eventually held to decide what the people wanted. The result was 1,90,870 for India, 91 for Pakistan. Junagadh has come a long way since then.

On 9 March 2019, I attended the wedding of Akash, son of Mukesh Ambani and grandson of Dhirubhai Ambani.  Akash Ambani, twin of his sister Isha Ambani, married Shloka Mehta, daughter of Russelbhai Arunbhai Mehta of Rosy Blue, a diamond company. I was there from the bride’s side for two days and got a chance to meet the family during the surreal wedding at the Jio World Centre in BandraKurla Complex. At the beginning of the wedding, the entire family paid respect to Dhirubhai Ambani and Nitaben’s father Ravindrabhai Dalal. Shree Ratan Tata was also there. Even in the hustle-bustle of the wedding, the gracious man inquired about by my family recalling his visit last year.

Coming to Vadodara, a princely state ruled by the Gaekwad dynasty of the Maratha Confederacy from its formation in 1721, it remained an island of excellence throughout. Housed in the sprawling 55 acres campus of the Pratap Vilas Palace at Lal Baugh in Vadodara, built by Maharaja SayajiRao III for his eldest son FatehsingRao, is The National Academy of Indian Railways (NAIR). The palace was leased by the then Bombay Government in 1949 and given to the Railways for their use. In 1964, the Railways purchased the property. I landed there on 10 April 2019 to interact with Officer Trainees inducted into Engineering, Medical and Management Cadre of Indian Railways, at the NAIR. The Academy is the ‘Centralized Training Institute’ for Officer Trainees assigned to ‘Indian Railway Accounts Service’, Indian Railway Personnel Service’, ‘Indian Railway Stores Service’ and ‘Indian Railway Medical Service’ by UPSC.

I was very happy to interact with the young officers. They had reached here by passing through strong competition and sturdy evaluation process. When I told them about my meagre education and succeeding in life by following certain values and methods, they were all ears. Citing teachings of Dongreji Maharaj and adding my practical experience, I asked if they were aware that by joining the Railways, they were indeed joining the task of managing the lifeline of India. Since the origin of railway in 1853, the Indian railway has been one of the most popular mode of transport employed by all classes of people of India. It is interesting to note that railways have done progress in every decade. With the time, railways routes, railway lines from narrow gauge, meter gauge converted to broadgauge and steam engine, diesel engine replaced by electric engine. Moreover, the beauty is, that all this even exists in some or the other form, somewhere in the vast system of Indian Railways.