Not slumming it anymore

A slum-rehab programme in Ahmedabad gives the poor a humane deal. It’s a model other cities could replicate Hetalben Patel in her spanking kitchen at the Shantapura colony

The prime minister, who takes pride in having risen from being a chaiwala, has often said he wants every Indian to have a home by 2022. A beginning seems to have been made in his city, Ahmedabad, and it has made another chaiwala, Udesh Patel, happy to have a pucca flat of his own. “We used to live in a jhuggi and the toilet was outside. It was humiliating. Now, I have a house with a toilet. Ab sab achcha ho gaya! [Now all is well]” his wife Hetalben says with a smile. Their house has running water and electricity.

The transformation was made possible under the Mukhya Mantri GRUH (Gujarat Rural Urban Housing) Yojana, or MMGY, a scheme launched in 2013 that aimed at making the state slum-free. Through public-private partnership (PPP) initiatives, it offers cheap flats to the down and out. Implementation is carried out by the Ahmedabad Municipal Corporation (AMC) in partnership with builder groups. 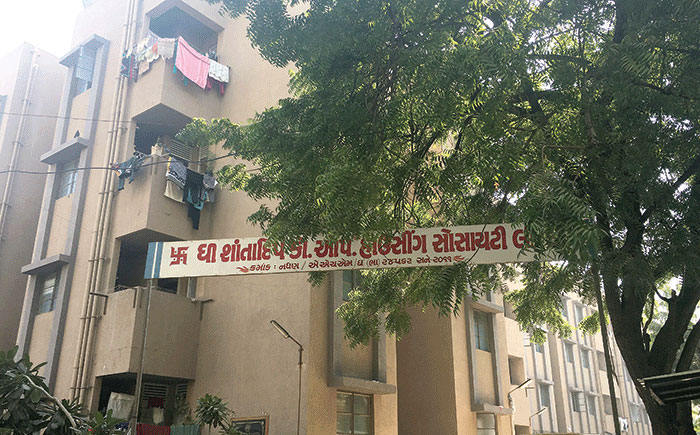 Once a slum, this plot now has flats with a dignified colony tag

The bustling city, once a textile centre, has a population of 78 lakh, of which more than four lakh used to live in slums. Six of those shantytowns – in Ambawadi, Gomti Nagar, Dani Limda, Khokhra, Naranpura, and one near the Sabarmati – have been removed and replaced with apartments into which the slum-dwellers are gradually moving in. Many of the slum-dwellers are happy beyond measure – for they are getting the flats for free. Besides, they don’t have to worry about making adjustments about commuting to the workplace, because the flats have been built in exactly where the shanties were. Only the people living in a slum near the riverbank have been rehabilitated in another locality. 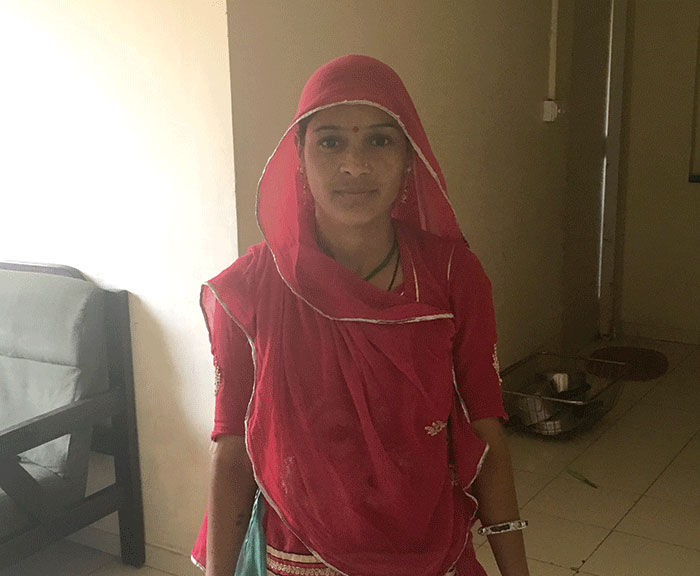 Bhartiben, a housemaid, now has a flat to call her own

Builders, who were chosen for the PPP project by calling for tenders, have borne the entire cost of constructing the apartment blocks. Not only that, they provided monthly rent to the slum-dwellers during the time they had to move out to allow the slums to be cleared and the apartments to come up. Since the apartments are four to six storeys high, more people are accommodated in less space and the excess (within specified limits) is given to the builder to develop. If there is still a surplus, it is retained by the AMC.

“We left this area and stayed in different places on rent for two and a half years, and during the time, I was given Rs 3,000 monthly by the builder,” says Bharatiben, a housemaid, who used to live in a slum in Ambawadi. The colony in which she has been rehabilitated goes by the name Shantadip Cooperative Society. It’s a dignified name, erasing the squalid past of the slum it came up on. 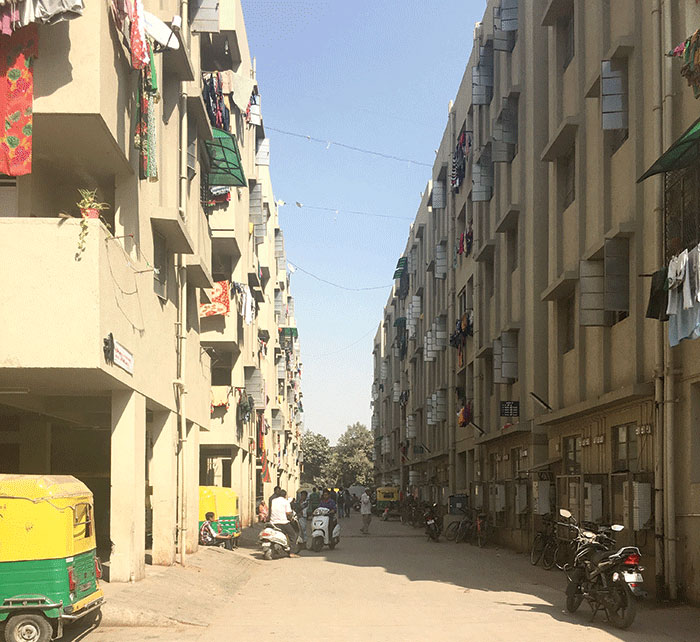 “The project faced difficulties in the beginning as slum-dwellers didn’t believe the government would really give them homes once the jhuggis were demolished,” says PK Parmar, Gujarat’s additional chief secretary for urban development. Support was sought from local NGOs and the slum-dwellers were gradually convinced that it would work out well for them. Says Neelam Patel, a lawyer for the SEWA Mahila Housing Trust, “What instilled further confidence in the slum-dwellers was the timely completion of the work.”

So far, nine slums have been cleared and about 8,000 people have been accommodated in over 2,500 flats. Explaining the policy initiative that made this possible, municipal commissioner Mukesh Kumar says, “There is unlocking of the value of slum land through this process. The land released by going for vertical development is used by the private player, and if there is some still left over, it’s a premium for the local bodies. One can see how resources are unlocked and everyone benefits – without the state or local bodies having to spend their own money.”

Besides basic amenities, the rehab colonies have proper sewers, water tanks, street lighting, open spaces, parks, healthcare centres, schools and anganwadis. “With basic amenities added, the living conditions improve and the human development index [HDI] in these places goes up,” says Kumar. He claims the HDI has risen nearly thrice in localities where rehabilitation is complete. 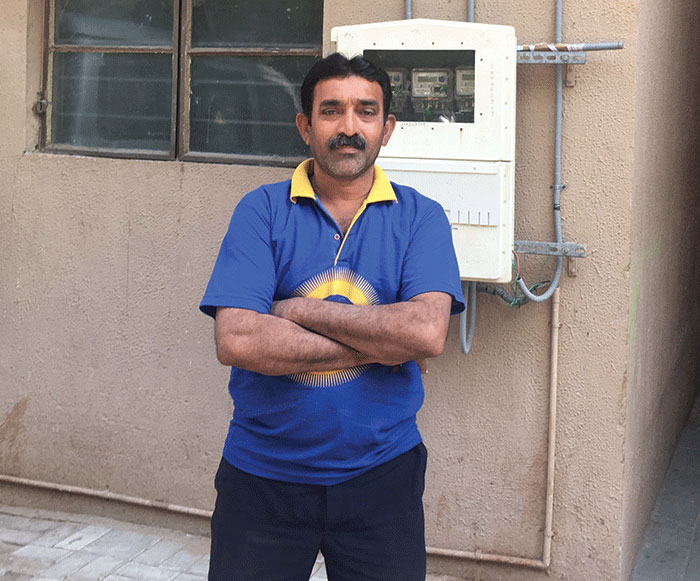 Udesh Patel, a chaiwala, one of the beneficiaries of the scheme

One major problem related to slums is that of encroachment on public land. That is now being taken care of. With the slums cleared, proper land measurement has been possible and surveillance is in place: every week, a security guard and a municipal officer visit the area to inspect the open areas and parks. Boundary walls have been built with heavy precast blocks that are difficult to break.

The rehabilitation plan for Ahmedabad’s slums was taken up in earnest with the Sabarmati riverfront development project, a favourite of the then chief minister Narendra Modi. The river, which old residents of Ahmedabad remember as nothing more than a sandy expanse with wet patches, was to be filled with water diverted from the Narmada and the riverfront was to be beautified with gardens, playgrounds and promenades. The project had drawn much criticism because it would involve the removal of thousands of shanties built along the riverside. Some of these slums are decades old.

Finally, the green signal came from the Gujarat high court in 2012. The government decided to rehabilitate more than 30,000 people living in over 80 slum clusters on the riverbanks with funds drawn from the centre’s Jawaharlal Nehru National Urban Renewal Mission (JNNURM). The comprehensive rehabilitation policy involving PPPs created by Gujarat for this became the blueprint for rehabilitation across the state. In fact, the PPP model has also been adopted for the Pradhan Mantri Awas Yojana (PMAY).

Comparisons are being made to the Dharavi slum development model, whereby an attempt was made to rehabilitate slum-dwellers in situ. The two big problems encountered there were that people were not ready to move out till the new flats came up and that many of them sold the flats within months of getting possession. Another hitch was that consent of 80 percent of the people living in the locality was required before the programme could be implemented. In Gujarat, by involving NGOs, slum-dwellers were brought around to agree to be rehabilitated. The policy was changed to do away with the requirement of consent, and flats were allotted, but ownership rights were held in abeyance for 15 years to prevent instant resale.

There have been some complaints, though. A local tough is said to have made deals with the builder to have more than one flat – in some cases five or six – allotted to members of the same family. The municipal commissioner says he has had one official suspended for connivance and is having the matter investigated.

The major problem, though, will be ensuring that the new colonies retain the cleanliness and the positivity that good living spaces foster. This is something the government will have to discuss with NGOs, sociologists and psychologists. Transformations achieved with great difficulty must not be frittered away.