Task force set up by state govt submits its report, outlining strategy to make it happen The Government of Gujarat had set up a task force committee in February 2022 under the chairmanship of Dr. Hasmukh Adhia, former union finance secretary, to work out a strategy for the state to contribute in making India a USD 5 trillion economy, as per the vision of the prime minister. In three months, the task force committee submitted its final report to chief minister Bhupendra Patel this week.

The target of a USD 5 trillion economy by 2026-27 is contingent on growth at the state level. Five states, i.e., Gujarat, Tamil Nadu, Maharashtra, Uttar Pradesh and Karnataka, constitute approximately 49 percent of the nominal GDP of the country. All five states have grown at an average annual nominal growth of nearly 10 percent or more during the pre-COVID period (2012-13 to 2019-20) and have the potential to continue to grow at a rapid pace in the coming years, if everything goes well.

The contribution in the economy of big states like Bihar state is also important but unfortunately Bihar is not doing well in industry. There is a big scope in packaging and food industry in Bihar since it has a higher production of vegetables and other agri products.

The central bank, major multilateral institutions and rating agencies released their latest FY22 real GDP growth forecasts for India. As per these forecasts, the GDP growth is expected to range from 8.3% (World Bank) to 10% (ADB). These exceptionally high levels of growth do partly reflect a base effect since India’s GDP had contracted by (-) 7.3% in FY21. The FY23 growth forecasts, therefore, indicate a more normal level of growth in the narrower range of 7.5% to 7.9%.

Taking a longer-term view, as per the October 2021 issue of IMF’s World Economic Outlook, the Indian economy is poised to become the global growth leader FY22 onwards. Not only does it overtake China amongst major economies in FY22, it is projected to retain this position for the next five years. 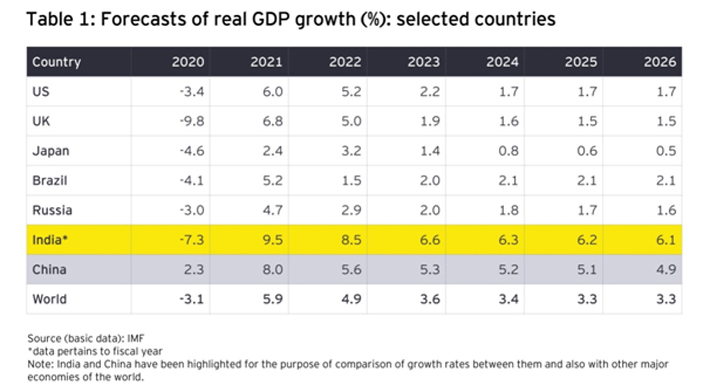 Gujarat’s contributions in all these sectors will help to boost the Indian economy. The country has to depend on Gujarat’s economy growth to achieve target of USD 5 trillion economy – besides Maharashtra, Tamil Nadu, Uttar Pradesh and Karnataka. In next financial year, the picture will become clearer whether the nation will be able to achieve this target or not.