EXCERPT: In ‘Countdown’, Anshuman Tiwari and Anindya Sengupta probe how the pandemic–lockdown ravaged the Indian economy and explore what could be the most sustainable way out During the Great Exodus of 2020, a mother had walked for several days from Delhi to her hometown, while her child had taken a breather from walking like this. The NHRC had taken note of media reports on this incident.

COUNTDOWN
Can India Rebound from the Meltdown of the Century?
By Anshuman Tiwari and Anindya Sengupta
Bloomsbury, 268 pages, Rs. 799 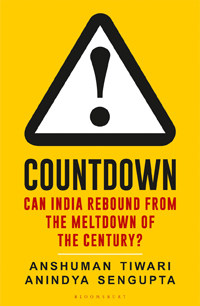 The unprecedented calamity of COVID-19 and the ensuing series of lockdowns battered the Indian economy at a time when it was already grappling with a deep structural slowdown. Almost a year into the pandemic, when the first signs of a tentative recovery were just visible, India was hit by a devastating second wave in March 2021. ‘Countdown’ tries to make the economic sense of this disaster.

As millions lost their jobs and walked back hundreds of kilometres or looked in vain for a hospital bed or oxygen, billionaires made more money than ever before and the stock markets climbed to new highs. This crisis laid bare India’s extreme economic disparities. Even during the best growth years, India failed to create enough jobs or invest substantially in human development. The country’s toughest economic challenge since 1947 comes at a time when her main resource, her demographic strength, is about to run out too.

Anshuman Tiwari, Editor of Money9, TV9 Network and an award-winning journalist, joins hands with Anindya Sengupta, a public policy analyst (who blogs at thetimeriver.blogspot.com and bazaarnomics.blogspot.com) to present a road map for sustainable reforms that could create millions of jobs, boost demand from below and reboot the economy in time to reap the benefit of India’s demographic dividend.

State: Too Big to Bear

It was a long and slow road to recovery for Makrand, who caught the virus during the first wave. COVID-19 had broken him physically and the recession ruined his family’s balance sheet. Makrand was running around a lot not only because of his own job but also to find something for his daughter. And in this process, he got the virus for second time. This time, he could recover at home isolation but he was completely shaken by the tragedies he saw unfolding all around him in Mumbai during April 2021.

One evening, while talking over the phone, he had tears in his eyes. It was his younger brother, Madhuk, from Canada. Not only did he send some money but also asked his children, Madhav and Garima, to help Himesh in his studies and Rhea find an online job.

Madhukbhai Patel ran a grocery store-cum-small restaurant at Dorset Park, a suburb of Toronto. His son worked in a merchant banking firm in London and his daughter was a software engineer in Seattle. The pandemic and recession had hit Madhuk’s business and his family hard but not only was he coping quite well, but was actually in a position to help his elder brother also.

Madhuk’s grocery store and restaurant had to be closed for quite some time but he took the help of Canada’s selfemployment support programme. Under this scheme, the government compensated him for up to 70% of his losses. In Canada, vaccination was slow to kick off but by the time India was dealing with a deadly second wave, vaccination picked up pace in Canada. Not only Madhuk had both his vaccine doses but his business opened up too.

In London, his son, Madhav, benefi tted from the British government’s furlough scheme. His job was safe and he managed to get 80% of his salary. Madhav was one of those five crore workers in Europe who benefitted from job retention schemes. Garima’s company, like some 6.5 lakh other American companies, participated in the US government funded pay-cheque protection scheme and managed to save jobs and salaries. As a result of all these, not only had Madhuk’s family survived but they could reach out to Makrand and his family in Mumbai.

Makrand got the help he needed but lying on his bed he had many questions. Why government hospitals in India are in such pathetic state? Why so many people had to die begging for oxygen? His daughter lost her job and his son’s future was clouded in uncertainty, but why there was no help from the government?

His entire life, he paid all kinds of tax with utmost honesty. As an accountant, he always strived to cleanly maintain the company’s books. But in the moment of his worst crisis, why did he not fi nd the government’s helping hand anywhere? Did only the governments in Canada, the UK or the US care about their citizens?

Debating on bank, savings and loans, Rohan could not understand why he could not get cheap loans. Cycling to Kendrapara from Delhi and Hyderabad, Jagat and Sheetal did not get even a bottle of water from the government which was supposed to be committed to the welfare of all. Bechelal could never imagine that Govind would one day return empty-handed and Govind’s mother would breathe her last on the road outside the hospital. Jameel and Pervez would never get to know what schemes were announced for their benefit.

Forget about the advanced economies, even compared to her G-20 peers, India in 2020 was the weakest in terms of providing direct help to the COVID-19 and lockdown-affected segments of the economy and to contain job losses. India’s relief package had mostly promises of loans and loan guarantees and not direct help to those who had lost their jobs or livelihoods.

Most countries, however, followed the prescription recommended by John Maynard Keynes during the Great Depression of the 1930s and concentrated their efforts to save jobs. This was the main reason why by the time the lockdown ended, despite the government package, instead of any improvement, the Indian economy fell deeper into an abyss.

Pay protection has been the most important instrument in efforts to save jobs around the world. In at least 35 countries including Britain, Germany, France, Italy, Canada, Malaysia, Hong Kong, the Netherlands, Australia, New Zealand, Denmark and Singapore, companies received subsidies from their governments to save jobs. In all these countries, salaries have been protected to the extent of 70–84% (in India, even amongst those who managed to save their jobs, every fourth employee faced on an average 20–30% salary cut).

Instead of jobs, the USA tried to protect incomes. Under the US CARES Act, apart from more than $500 billion in a pay cheque protection programme for small businesses, the government made one-off $1,200 payments to at least 2.6 crore people earning less than $75,000 annually. Unemployed individuals received an additional $600 per week from the federal government (in addition to local unemployment allowances).

Apart from this, governments came out with different packages to help those who fell ill and could not go to work.

Middle-class citizens like Makrand, Rohan and Lavanya do understand the intricacies of tax and interest rates but during this crisis, whenever they tried to understand the absence of government relief, they heard only old and outdated arguments like budget deficit and huge population. But they also knew that the tax burden had been steadily increasing and so had the budget size. They also had some idea that the government used their savings too.

As an experienced accountant, Makrand started wondering whether the government balance sheet is the main problem and, Rohan, with all his enthusiasm, was trying to understand where exactly all the government money went. […]

The excerpt reproduced with the permission of the publishers.