Do we need to treat everybody fairly?

Excerpt from a new book by Uday Singh that sheds light on some the not-so-obvious or innocuous things that drive us, limit us, and make us tick 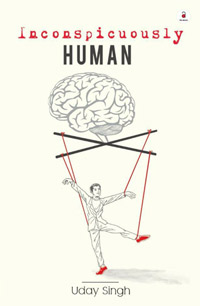 
Economist Uday Singh, who made his debut with ‘Pokhran’ [https://www.governancenow.com/views/interview/always-write-or-live-life-with-all-passion-and-heart-in-it-], is out with his new book about the not-so-obvious or innocuous things that drive us, limit us, and make us tick. A book for every leader, ‘Inconspicuously Human’ captures insights that will enable all of us to be better leaders, and more self-aware and empathetic individuals.

Singh, an MBA from Columbia University and a former management consultant with McKinsey & Co., works at an investment bank in New York City and lives with his family in Princeton, New Jersey. He has advised political and business leaders.

In his new work, he covers a wide range of questions about what constrains people, what motivates them, and ultimately what makes them happy. Some of them are:

* When asked to play the child’s game of arrange wooden blocks on top of one another, why did one manager falter after five blocks while another managed to stack up 20?

* Are we able to learn things like swimming or riding a bicycle without any memory of having undergone such learning?

* Do we impose limits and restrictions on our own selves that we may not even be aware of?

* How is our inability to recognise such self-imposed limits related to fleas?

* For happiness, is it good to be the big fish in a small pond or go for bigger oceans?

* How does the culture of a society constrain its very members that it is intended to help?

* Why did the family, across generations, always clip the turkey’s wings while cooking a festival feast?

Here is an excerpt from the new book, reproduced with the permission of the publishers.

Do We Need to Treat Everybody Fairly?

For most of us, it would be a foregone conclusion that we need to treat everybody fairly—if asked, the answer would be an unequivocal “Yes!” Yet, we all make the mistake of treating individuals differently based on their station in life, educational background, race, and gender, among other things. Even the most conscientious among us end up doing this without even being aware of it, but the people that the treatment is directed at nonetheless notice it. For those who might consciously go for differential treatment for different types of people, their arguments center around the notion that it takes sophisticated intelligence or education to perceive and value fair treatment. This is specifically true of politicians and the elites in most developing countries, where there is no regard given to treating the lower-income people differently—both in personal settings, such as maids and household help and in more public settings, such as when they address the voter base in villages and small towns.

The animal experiments in this space will dispel the notion that fairness or perceiving and valuing fair treatment is an attribute that is unique to intelligent humans.

Capuchin monkeys and unfair treatment
Sarah F. Brosnan and Frans B. M. de Waal, Emory University professors, first conducted the experiment in 2003, titled “Inequity Responses of Monkeys” involving Capuchin monkeys. The objective of the experiment was to investigate whether monkeys can perceive differences in compensation for different members in a group, for performing the same task. They performed the same experiment about a decade later and released the video on YouTube which went viral, mostly during the protests on Wall Street, when the main street was protesting against the disproportionate pay and bonuses for the Wall Street bosses and their employees.

The setup of the experiment involved two Capuchin monkeys both in their separate cages made of glass walls so that each could see the other. The monkeys were required to perform a task – such as to ring a bell – to receive a reward.

In the first step of the experiment, both the monkeys received a grape as a reward for performing the task. And it was clear that both the monkeys were quite happy with the reward and continued to repeat the task multiple times to receive more grapes. The compensation involving grapes was sufficient for them to have performed the task.

Puppet experiment
In 2012 two psychologists – Patricia Kanngiesser of University of Bristol, UK, and Felix Warneken of Harvard University, USA – published the results of their experiment using puppets that provided experimental backing to the notion that humans are born with a sense of fairness and that it is innate rather than something that is taught. To test whether the notion of fairness is inbuilt, the experimenters conducted the study with 3-year-olds and 5-year-olds after informed consent from the parents as well as ethics approval from the Harvard University Committee on the Use of Human Subjects.

The experimental setup involved three components—a 3-year-old (or 5-year-old) test subject, a puppeteer to operate a puppet, and an experimenter. The study comprised of 18 (equally split between girls and boys) 3-year-olds and 18 (again, equally split between girls and boys) 5-year-olds. Before the start of the experiment, there was a training run where the test subjects were familiarized with the game. As part of the game, both the subject and puppet (operated by the puppeteer) would use fishing rods with hooks to capture small buckets, each bucket containing one coin, from a large tray while being seated 30 cm away from the tray. The experimenter wielded a mock stopwatch to signal the start and end of the game. At the end of the game, the coins collected by both the subject and the puppet were counted, and appropriately stickers – the reward for the work – were given to both the subject and the puppet.

The results of this study surprised the experimenters and very likely would surprise most of the readers as well. Accounting for some experimental errors, it was clear that the 3-year-olds and 5-year-olds were able to draw conclusions on the relative size of work efforts and more importantly were able to reward themselves and others based on work performed (or the equivalent of merit). Given the ages of the test subjects, it is a safe conclusion to arrive at that the notion of fairness – that, rewards should be commensurate with merit or work performed – is an innate trait, and it is not something that is taught.

Summary
If monkeys can perceive unfair pay or differential treatment, then it is safe to assume that humans will be able to perceive it regardless of their IQ levels. It is programmed as part of our core instincts. Whether we are building a business or working on a volunteer project or involved in a corporate environment, we might be setting ourselves up for success if we were to strive to establish a culture of distribution of reward – whatever form the reward might take, such as salary or promotion or recognition – based on merit. As that will appeal to the widest set of the population given that it is an innate trait.