The Murderer, the Monarch and the Fakir: A New Investigation of Mahatma Gandhi’s Assassination
By Appu Esthose Suresh and Priyanka Kotamraju
HarperCollins, 240 pages, Rs 399 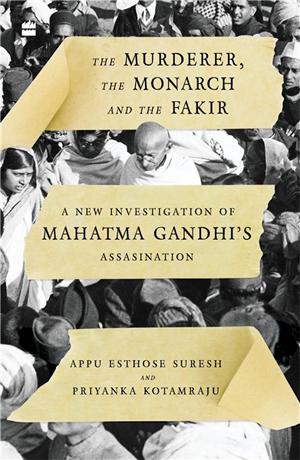 The bloodied shawl has long since faded to a vague brown and now sports nostalgic sepia tones. The bullet placed next to it, in all probability a replica, felled Gandhi, whose final resting place is just across the road from the National Gandhi Museum. But what about the gun, and the man who fired it, and the men who helped him?

In a sense, Gandhi’s killing, unlike many sensational assassinations in the West, was an open-and-shut case. Who did it and why were, broadly speaking, never a secret. Yet, the event that accompanied the birth of the nation continues to cast its long shadow, which is only darkening all the more close to three quarters of a century later. And there are details only dimly understood, if not altogether suppressed, of the “joint communiqué” that the assassin and his victim worked on and co-authored (in Ashis Nandy’s oft-quoted words). The nation should rather come to terms with them – there might still be time.

Appu Esthose Suresh, whose byline went with some excellent pieces of investigative reportage in The Indian Express and Hindustan Times, and Priyanka Kotamraju, who also worked with the Express and The Hindu Business Line and co-founded a grassroots feminist research platform called Chitrakoot Collective, have in this timely book turned their journalistic skills and scholarly training to explore the facts behind the Gandhi assassination. Moreover, they’ve placed their findings in the context. Through the prism of the cataclysmic event, they also shade light on the life, work and philosophy of Gandhi as much as of Godse and of India.

The headline part of ‘The Murderer, the Monarch and the Fakir’ is that their investigation pushes the origin of the assassination conspiracy back to a week before Independence, that is, much before Gandhi’s insistence that India pay up Rs 55 crore to Pakistan – the supposed trigger point. It also involves a larger cast of characters than usually assumed.

While Godse’s own statement implicated the Hindu militarisation project for the murder, the details have been a matter of much speculation and subject of several tomes apart from scholarly essays. Most usually take the Jivan Lal Kapur Commission Report as the starting point, along with letters and papers from archives. What makes this book different is the fact that it is the outcome of investigative journalism. Agencies like the Intelligence Bureau (IB) and the Crime Investigation Department (CID) of police forces, secretive and steeped in bureaucracy, hold many secrets in their files and in the memories of its past officers. Some of those secrets relate to the kind of topics scholars painstakingly try to research in the Nehru Memorial and the National Archives, unwittingly missing out other crucial sources. “Being an active journalist covering the government in Delhi helped gain access to some of the places, which are otherwise not easily accessible to researchers,” writes Appu in the prologue.

Among the many merits of the book is this, that it opens up new paths of inquiry into the past. The Gandhi scholarship has been confined to the same set of source material and the same methodologies. Journalists can enlarge its scope by exploring new kinds of material in new ways. This can go beyond Gandhi, and also beyond investigative journalism; for example, long-form narratives of historical events that shaped the nation.

Such an engagement with the past might also be part of the routine for an active journalist when ‘alternative facts’ of that past keep pushing their way into tomorrow’s headlines with unfailing regularity.