Gautam Chintamani, a film historian and author, has penned an in-depth chronicle of prime minister Narendra Modi’s second innings. Here in this excerpt, he charts the genesis of Modi’s foreign policy: 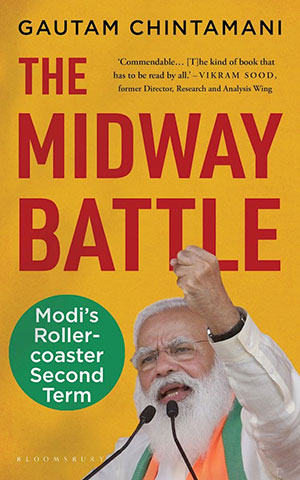 One of the developments that attracted much of the spotlight as Narendra Modi took oath as prime minister for a second term was the inclusion of technocrat Dr Subrahmanyam Jaishankar in the cabinet. A former career-diplomat, Jaishankar served as foreign secretary in Modi’s first term and his elevation as minister of external affairs spelt out the agenda for Modi 2.0 for the course of India’s foreign policy. It hinted at how Modi preferred expertise, which individuals such as Jaishankar brought, more than political leverage. Through the course of his first term, Modi had taken a personal interest in shaping India’s relationships with old allies, developing new strategic partnerships and forging relations with regions and people where even the slightest shift in geopolitics changed the nature of India’s stature as a world player. In this aspect, Jaishankar, the foreign secretary, had played a significant role in transforming Modi’s ‘Look East’ policy into the ‘Act East’ mode and with him in the driving seat in the MEA, Modi could carry on what he had started in 2014.

When Modi became prime minister in May 2014, political analysts discussed the probability of Modi extending his ‘Gujarat model’ to the rest of the nation, but many said that, at best, it would accelerate India’s economic development only to some extent. The primary reason for such low expectations was that Modi was seen as a provincial leader; also, certain political sections in the West shunned Modi due to the shadow of the 2002 Gujarat riots.

Yet, Modi’s focus on shaping India’s foreign policy right from the onset of his first term surprised most.

In one of the first major indicators that Modi was not going to follow any old playbook as the prime minister, he invited the leaders of the South Asian Association for Regional Cooperation (SAARC) for his swearing-in ceremony on 26 May 2014. The action demonstrated Modi’s enthusiasm to help India regain its standing within the subcontinent as well as the approach that his government would have in the days to come.

During Modi’s first term, India adopted a mix of diplomacy, soft power and tough posturing to change its image across global platforms. In his maiden speech at the UN General Assembly (UNGA) in 2014, Modi went beyond reiterating India’s commitment to peace and the UN’ endeavours across the globe or call for reforms in the UN’s Security Council, which in other words, recapitulated India’s claim for a permanent seat. Modi used the platform to set out India’s agenda that he had envisioned. Among the first tools he used to make India a global trailblazer was to call for an International Day of Yoga. In his address to the UNGA, Modi called yoga an invaluable gift of India’s ancient tradition and described it as a holistic approach to health and well-being. The idea of a global yoga day was not something leaders from India were expected to pitch on a global platform. Modi’s pitch became a testimony to India’s out-of-the-box thinking in diplomacy and foreign policy. For the first time in the history of the UN, 177 member states decided to co-sponsor the resolution and it was adopted without a vote.

In his first appearance at the UN, Modi stated in no uncertain terms that institutions that reflected the imperativeness of the 20th century would not be effective in the 21st. He also made it clear that India would no longer be an afterthought when it came to the world stage.

Between 2014 and 2019, India under Modi re-invented itself on the world diplomacy map. A perceptible difference between the Modi-led NDA government and UPA-I and UPA-II under Manmohan Singh was the manner in which India enhanced its clout as a major player in nearly every sphere as opposed to constricting itself. It had also created strategic alliances across the spectrum, and for the first time in decades, India struck a fine balance in keeping countries on its side. While negotiating with the outside world, the mantra was simple — this ‘new’ India was not going to be second to anyone. The best showcase of this new approach was most visible in the way India began dealing with oil imports. Through ‘oil diplomacy’ efforts focused on Russia, Latin America and Africa between 2014–18, India renegotiated supply contracts with countries that it bought oil from – it increased its investments in Russia to US$10 billion by buying oil fields in addition to its older investment in Sakhalin, it bought a 100 per cent stake in Abu Dhabi’s Onshore Block 1 Concession with plans to invest US$170 million, it furthered its investment in South Sudan and Mozambique, it engaged with both the US and Russia as part of its agenda to diversify from acute dependence on OPEC (Organization of Petroleum Exporting Countries) for energy sources. India changed the rules of the game when it began to import crude oil from the US and the move sent a message to OPEC that the world’s third-largest consumer had other options. A common factor across most of the Modi government’s landmark achievements as far as foreign policy went was to get countries that ideally did not see eye-to-eye to sit on the same side of the table. India managed to do the near-impossible by getting other Asian giants such as China, Japan and South Korea to come onboard to push OPEC to treat Asian buyers as primary markets. With Petroleum Minister Dharmendra Pradhan raising the issue of OPEC charging Asian nations a premium for imported crude when compared with European and US importers, talks about China and India forming an oil buyers’ club were seen as the rise of a new cartel that could force OPEC to think of setting new and fair prices for Asian consumers. The realization that India and China alone accounted for 17 per cent of the world’s oil consumption and India’s willingness to explore new markets, such as Venezuela that was willing to sell in Indian rupees to circumvent US sanctions, pushed OPEC to put India in a
different league than before.