‘We will neither consider their beliefs inferior nor impose our rituals and beliefs. This is Nehru’s suggested third way.’ File photo GN / For representation only


‘Being Adivasi: Existence, Entitlements, Exclusion’ (Penguin India), edited by Abhay Xaxa and G. N. Devy, is a collection of essays addressing the persistent problems faced by Adivasis and Denotified communities, from questions of their distinct identity, land alienation, indebtedness, and displacement from ancestral lands. It also presents the views of the Adivasis and the Denotified Communities on the process of development and its clash with their rights. 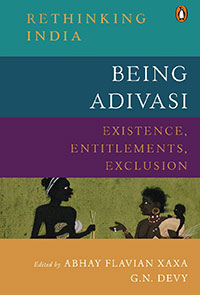 This volume, in collaboration with Samruddha Bharat Foundation, serves as a prelude to change that will bring to Adivasis some measure of their rights as citizens of a democratic country. This book is part of the Rethinking India series, a 15-volume work of over 400 of India’s foremost academics, activists, professionals, and policymakers across party lines.

The seventh volume in the ambitious Rethinking India series, Being Adivasi: Existence, Entitlements, Exclusion looks at the process of development and how it clashes with the rights of the Adivasis. The volume serves not as an academic exercise but, in addressing the larger readership, as a prelude to the change that will bring to the Adivasis some measure of their rights as citizens of a democratic country. The essays in the volume address the persistent problems faced by the Adivasis and Denotified Tribes, from questions of their distinct identity to land alienation, indebtedness and displacement from ancestral lands.

Persistent problems faced by the Adivasis-land alienation, indebtedness, vanishing minor forest products from government forests and displacement from their ancestral lands-led to their impoverishment. The Panchayats (Extension to the Scheduled Areas) Act and the Forest Land Rights Act (FRA) enacted by the previous governments were decisive steps towards the empowerment of the Adivasis. However, at present, the implementation of these provisions has taken a back seat. This volume of the Rethinking India series presents the views of the Adivasis and the Denotified Communities on the process of development and its clash with their rights.

Question of Tribal Heritage and Rights

In 1931, census commissioner J.H. Hutton put forward the suggestion that to preserve the beliefs of tribal communities, selfgoverning reserved regions be demarcated for them. Well-known tribal activist and anthropologist Verrier Elwin, too, held a similar view. However, this thought faced harsh criticism too.

There have always been differing viewpoints regarding conservation of tribal lifestyle all around the world. The first belief is that tribals should be free, with a right to rule in their region. Outsiders should not have the right to interfere with their lifestyle. The counter belief is that they should be integrated into the mainstream.

Elwin, a proponent of the first line of thought, believed, ‘Integration isn’t possible without political and spiritual equality’. He drew the attention of the nation state towards the need to conserve tribal privacy. He challenged and rejected the belief of imposing one’s own thought on them.

Social worker Amritlal Vithaldas Thakkar, known popularly as Thakkar bapa, held the opposite view. Thakkar bapa had spent 35 years in service of tribals and fought for the rights of tribal people through the Indian Scheduled Tribe Organization and Bheel Seva Mandal, drawing inspiration from Congress leader Gopal Krishna Gokhale. He led the way for the involvement of tribals in the nation-building task. It was Thakkar bapa who made Gandhi aware of the plight of the Adivasis. That was one reason why Gandhi asked young Elwin to take Thakkar bapa’s help and move into an Adivasi village for work. Elwin followed Gandhi’s advice and spent the rest of his life in remote tribal areas, bringing through his writings knowledge about Adivasi culture and society to the rest of the world. These interactions helped build bridges between the national freedom movement and Adivasi communities.

However, the imposition of one’s own belief on tribals invariably started in the name of including them in the mainstream. This raises the question, what defines the mainstream? Does wearing shirt-pants and speaking English or doing yagna symbolize joining the mainstream? Which god, mode of worship or rituals of marriage, birth and death would be considered mainstream? Should the strong opponents—from the Sangh Parivar—of conversion of tribals to Christianity not look at their own deeds? On the one hand, they oppose the conversion of tribals to Christianity and then impose their own rituals on them. Should everyone not have the right to live their lives in their own way?

Jaipal Singh Munda, a member of the Constituent Assembly, had said, ‘You can’t teach democracy to tribals. You need to learn democratic values from them. They are the most democratic community on earth’. Through his adept mode of reasoning, he sought to emphasize that tribal lifestyle is the first school of democracy that ought to provide democratic inspiration to other classes of society. We do not have any right to impose our beliefs and values on them.

India’s first Prime Minister Jawaharlal Nehru vehemently rejected both points of view. He said: ‘Conservative settlements and imposing beliefs to the lifestyle of tribal communities in guise of adding tribals to mainstream.’ In the Constituent Assembly, when Jaipal Munda raised the issue of tribal rights and oppression done to them over thousands of years, Nehru pointed out to him that tribal rights, justice and equality were concerns that the Constitution would take into cognizance. His ideology is explained by only one word used on a different occasion. When he was asked what the stance towards tribal groups should be, he said, ‘Humility’. This is the soul and purview of the provisions towards tribal heritage in the Constitution drafted by Dr B.R. Ambedkar.

When we think with humility, only then can we do justice with tribal communities. We will neither consider their beliefs inferior nor impose our rituals and beliefs. This is Nehru’s suggested third way. The ‘panchsheel’ way given by Nehru is the foundation of equal rights and justice for tribal communities. According to it:

1. Tribal people have the right to live according to their innate conscience. There should be no imposition of any external values on them. They should promote their art, culture and tradition. This is an important thought. The opposite has been happening either through ‘ghar wapsis’ organized by Sewa Bharti organizations in the name of culture or through missionary institutions who use the notion of making them civilized. It is wrong to force spiritual slavery either by offering humanitarian services like education and health or luring them with these basic necessities. Each individual or community has the liberty to choose any religious view according to their own intelligence. It may be either Buddhism, Jainism, Christianity, Sikhism, Shaiva, Vaishnava, Kabir Panth or any other way. The Constitution considers tribal lifestyle as an invaluable heritage. It prohibits any external interference and respects the privacy of individuals.

2. The rights to land and forest of tribal groups must be respected. Tribal innate consciousness has established an interrelationship with nature over centuries. The Constitution recognizes this compassionate identification specifically. On use of land for development purposes, their consent is required. It also understands the share of their innate intelligence in natural resource management and its compulsion.

3. We should educate and skill tribal people for administration and development of their regions. External influence in matters concerning them should be minimal. On the socio-economic front, marginalized tribal groups can be truly developed with their own contribution, otherwise the development would be hollow. The Constitution ensures their role in nation building through reservation in education and administrative fields. Their wholesome development has been institutionalized.

4. Work should be done through their cultural institutions rather than building a hyper-administrative framework. Any confrontation must be avoided. In a society, true policy can be made through integrating the voice of wisdom gained through their experience of ages and their innate intelligence. Through reservation, the Constitution ensures the oasis of their accumulated intelligence in the Lok Sabha, Vidhan Sabha, Panchayat and urban local body elections. Community leadership is accepted through the PESA. Scheduled regions are granted special status.